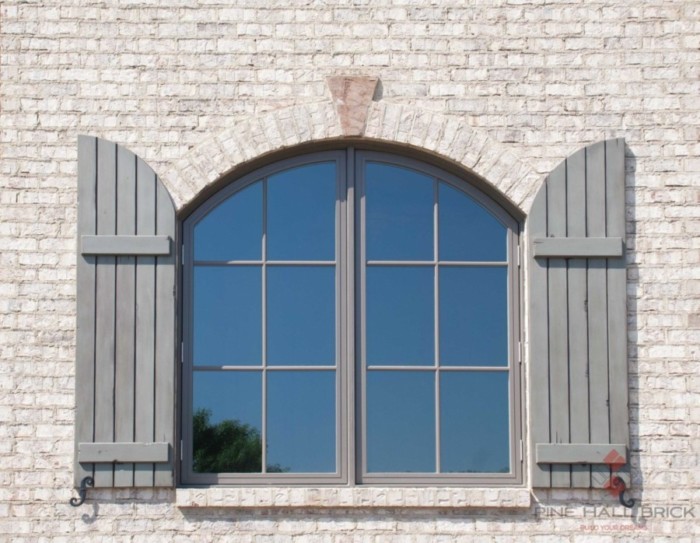 It is best to start by understanding the three most common types of shutters and their applications. Once you understand the basics, we will look as some examples of brick and shutters combinations that really make your new home stand out on the block.

Raised Panel Shutters feature a single or double raised panel similar to a kitchen cabinet or a door. Their low profile allows them to blend seamlessly with almost any style home. 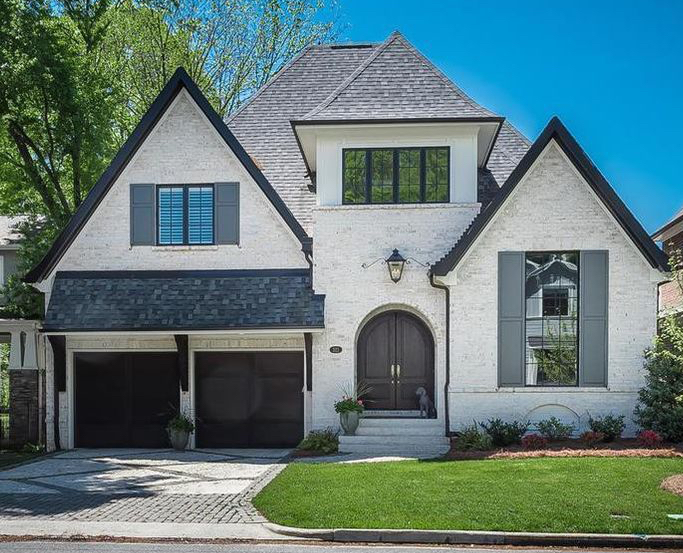 Louvered Shutters have angled slats that allow air and light to pass through them. They are the most ornate of the shutters and are considered the most traditional. They are typically found on more classically architecture styled homes. 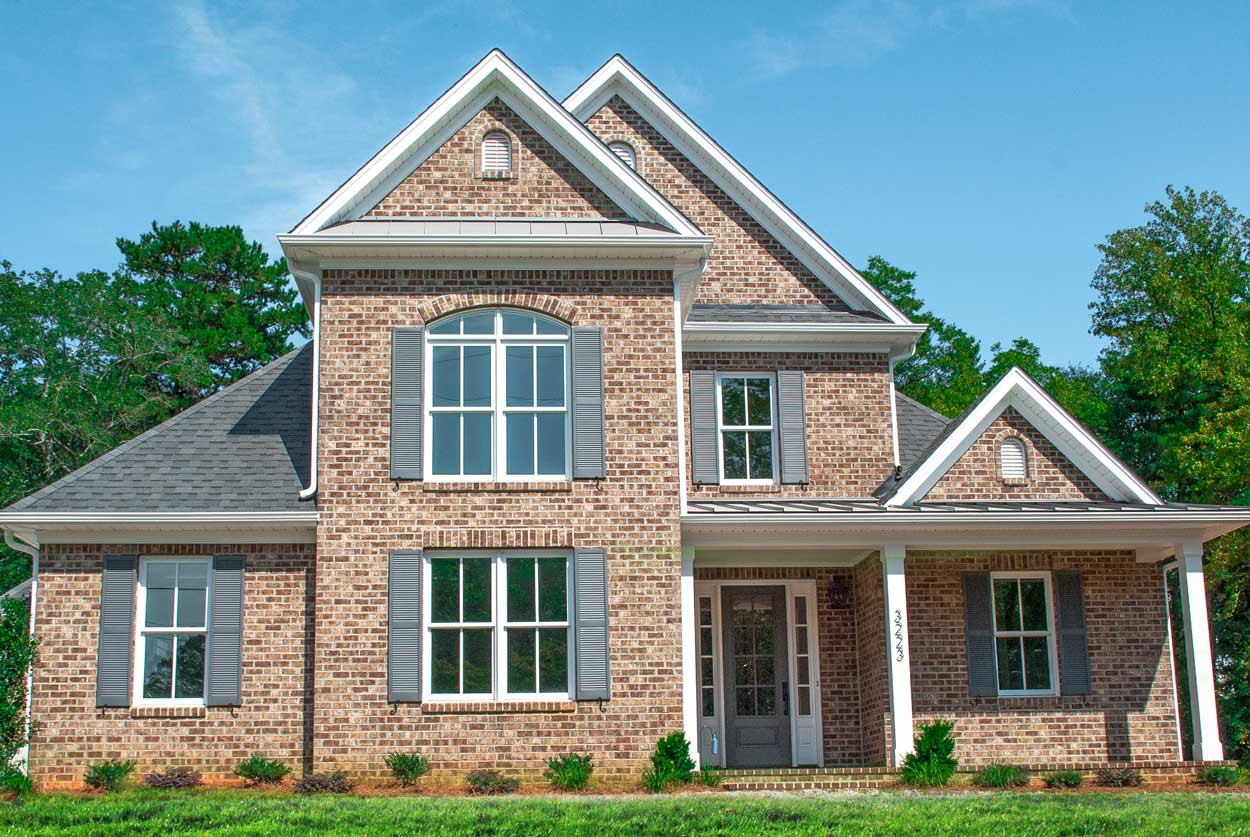 Board and Batten (BnB)

Board and Batten Shutters are one to four wooded boards held together with wooded cross panel, which typically goes horizontally across the shutters, but can also go at diagonal angle across the shutters. The most popular type of shutter in most markets in the southeast due to their rustic appearance. They are featured on Craftsman, French Country, Farmhouse or Mediterranean style houses. 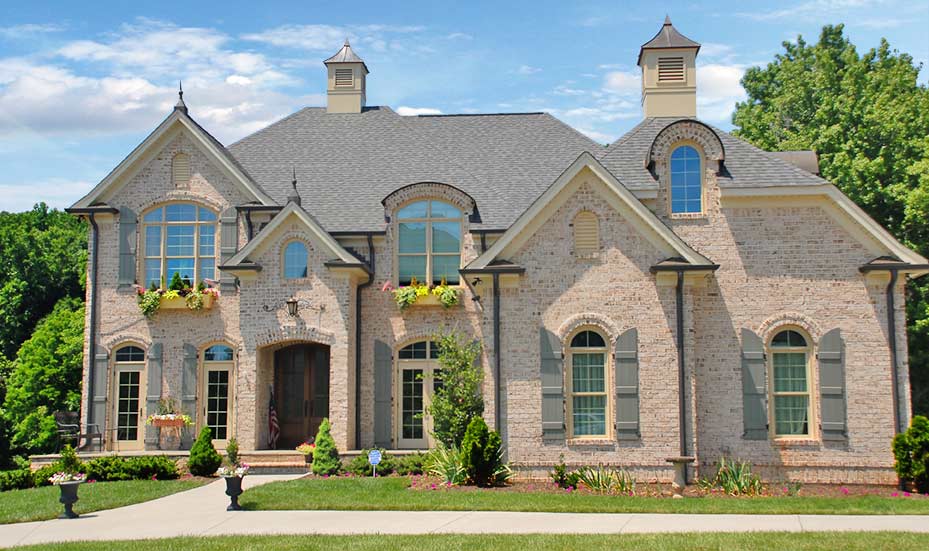 Shutter dogs also called shutter holdbacks are metal details that are mounted to the wall next to the shutter.  They are typically “S” shapes and made from iron or stainless steel. Functionally, shutter dogs hold the shutter in place when the shutter is open and then rotate allowing the shutters to close. Not all shutters feature shutters dogs, but they are a way to add a decorative element to the outside of your home. Check out how to Drill Into Brick if you want to see how to hang your own Shutter Dogs. 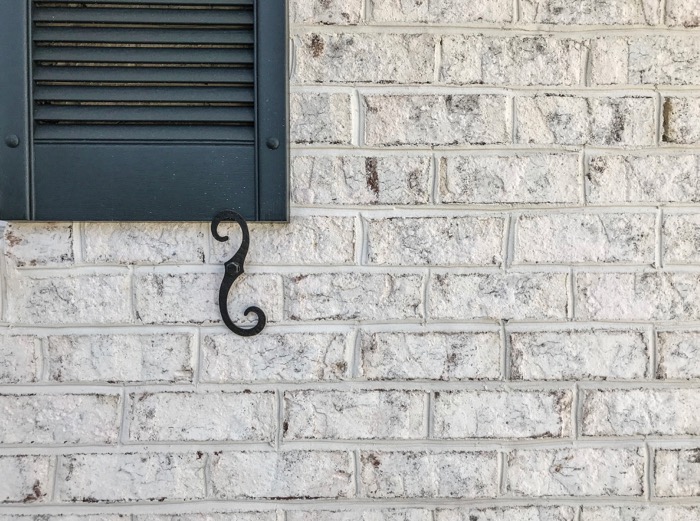 French styled architecture have always used shutters to create a focal point from the street. The light blue board and batton shutters really pop off the white wall featuring Oyster Pearl Brick. More pictures from this home can be found here. 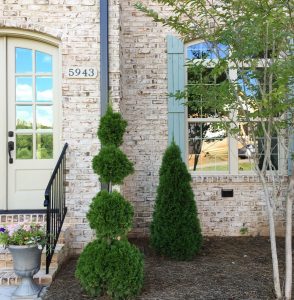 This house also used white brick and blue shutters, but the look is completely different than above. The pale aqua board and batton shutters provide just a hint of contract against the overwhelmingly white Villa Chase Brick. Blink and you might miss them. More pictures from this home in progress can be found here. 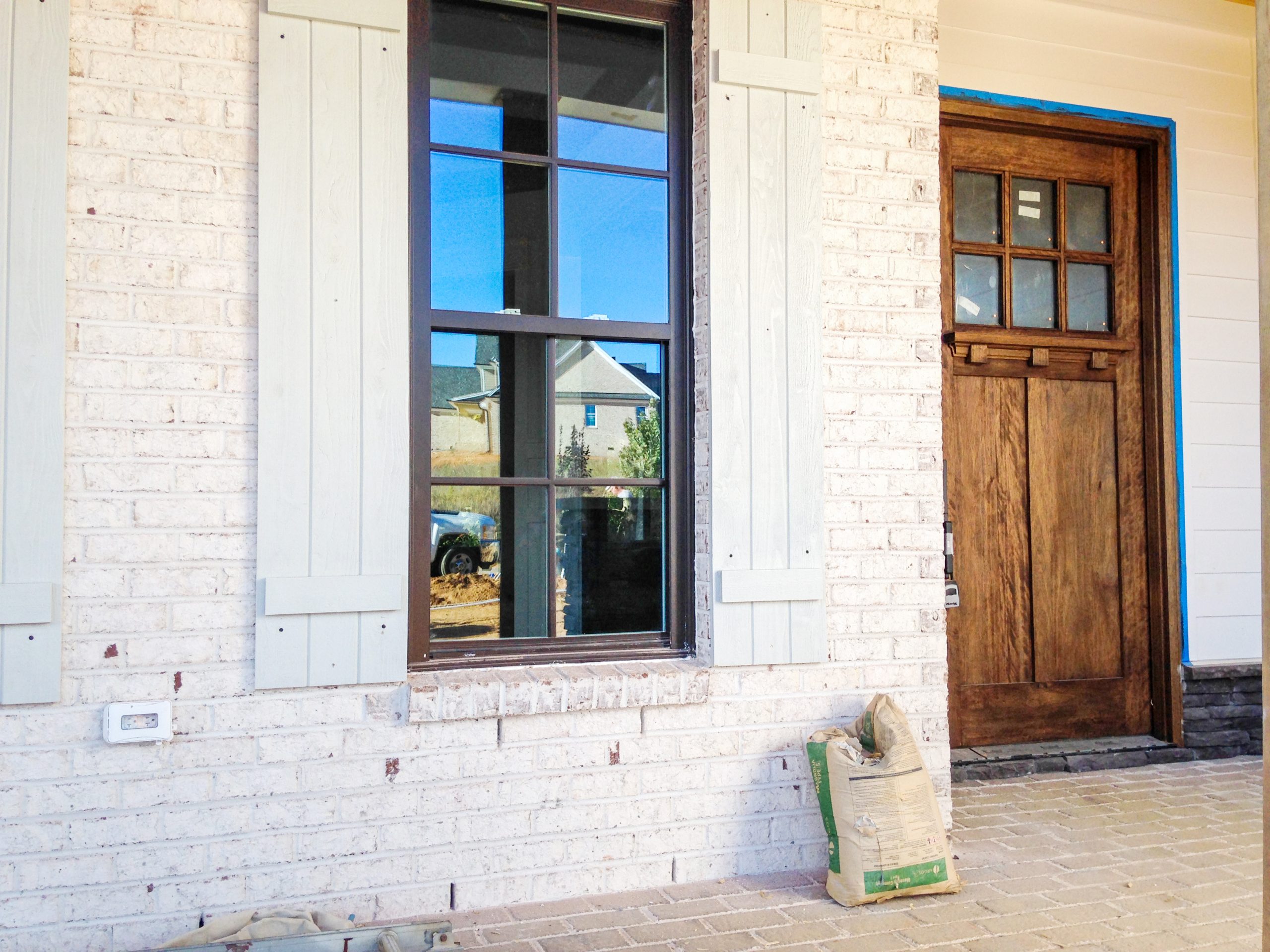 This is a unique brick and shutter combination. The brick, Tufts House is highly variegated creating a mortar washed appearance. This style of brick can pair with almost any color of shutter, but this Teal Louvered shutter adds a touch of elegance to this stately home. 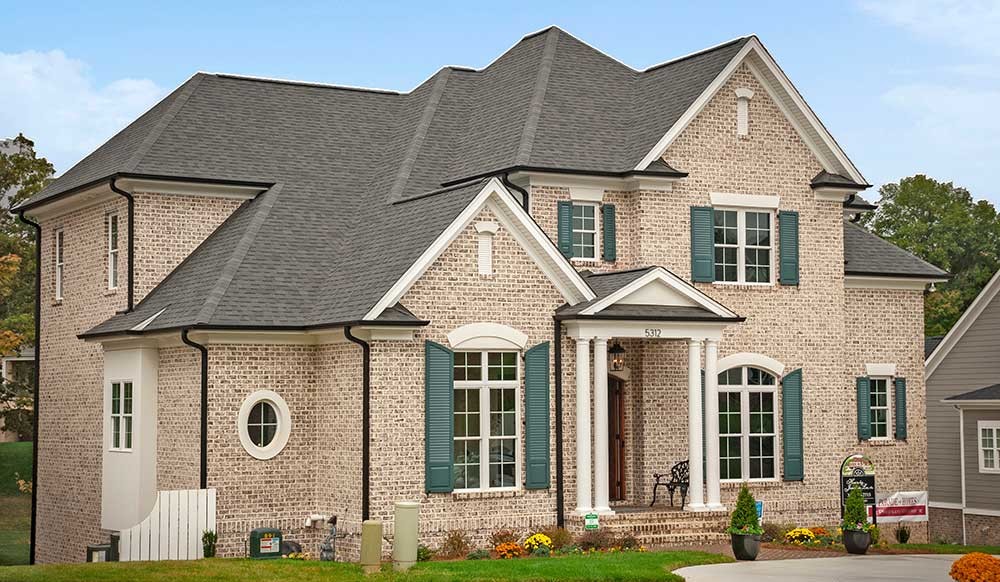 This home features the creamy tan French Manor brick, which in a vacuum opens the homeowner up to many shutter color options. However the severely pitched roof in the Tudor style is a warming mix of greens and brown. The pistachio color shutters and the brown half-timbering tie the roof and the brick together perfectly. 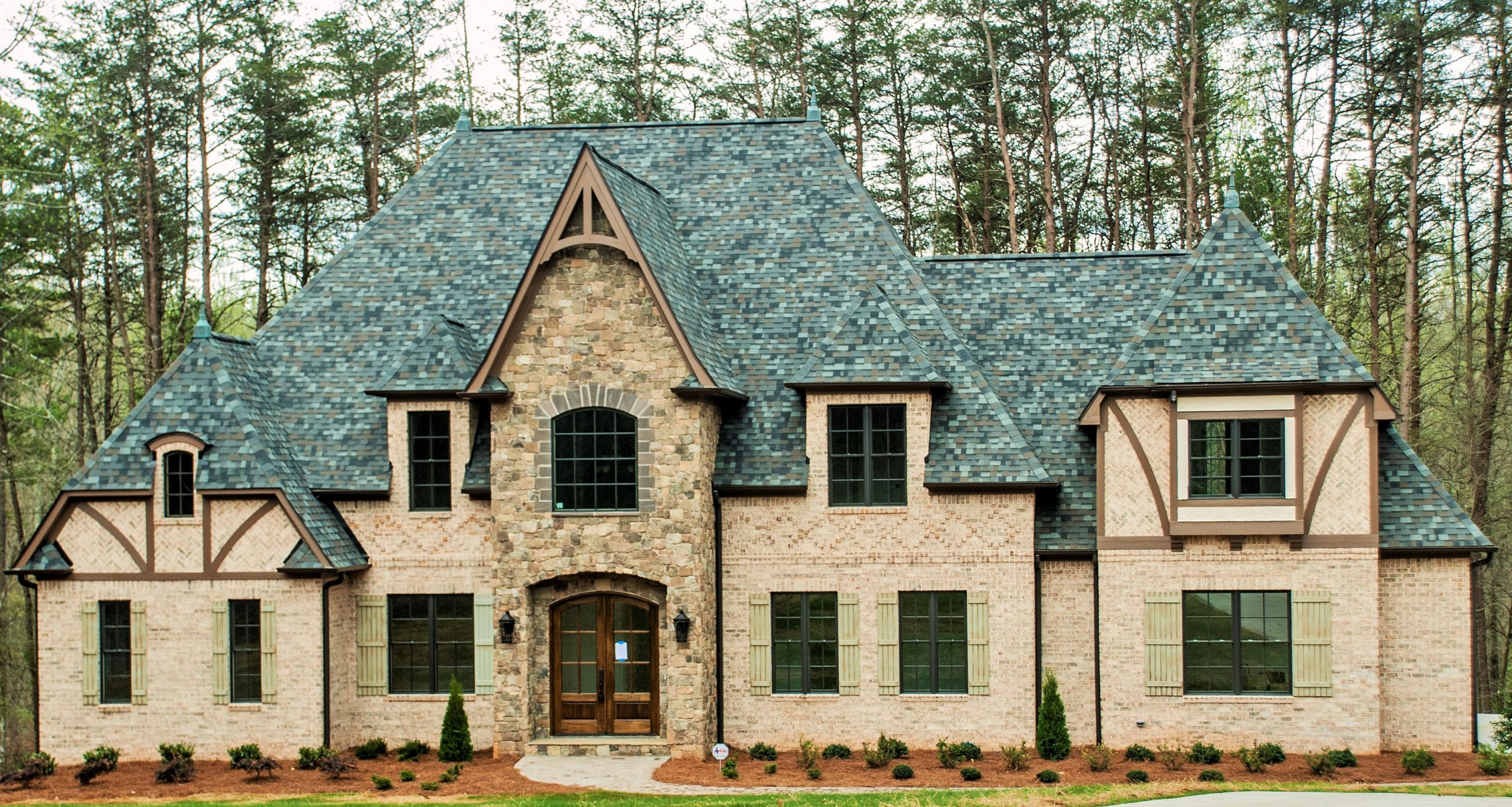 Check out how to Drill Into Brick if you want to see how to hang your own Shutter Dogs.