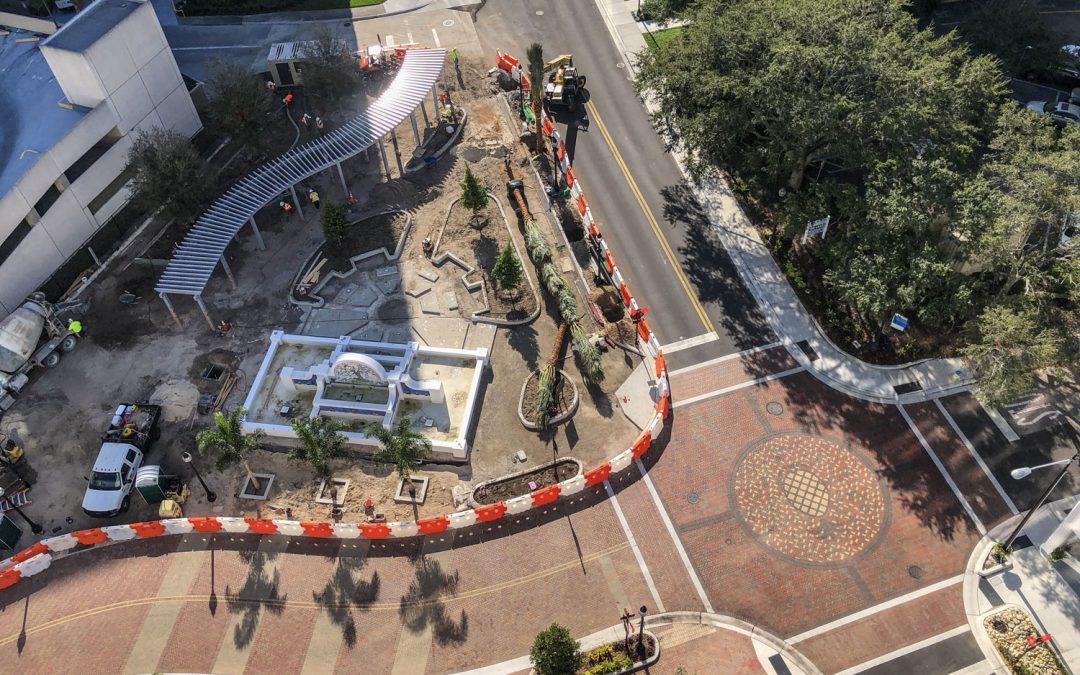 A municipal streetscape that use clay pavers helps tell a city’s story. With Sarasota, Florida, Pine Hall Brick pavers in Buff, Full Range, Dark Accent and Rose, were cut and installed into a series of mosaic patterns to celebrate the nautical, sub-tropic environment.  A compass rose was set into the pavement at Main Street, a pineapple was installed at Pineapple Avenue and a lemon was placed in the middle of State Street. As it turns out, the pavers in Sarasota also help tell the story of how sometimes, visionary leaders rise up when a volunteer sees a need and decides to find a way to fill it.

If Paul N. Thorpe Jr. was still with us, there is no way that he would roll a bowling ball down the middle of Main Street in Sarasota, Florida.

He actually did that, once upon a time. It was the 1970s and the banker, who was fairly new to town wanted to come up with a dramatic way to prove a point: He claimed he could roll a bowling ball down a downtown street and the place was so deserted, the bowling ball wouldn’t hit anyone, or anything.

So he did. He went out and bought several bowling balls, stood, lined up his shots  and bowled straight down Main Street.

It was true. Nothing was hit because nothing was there to hit.

(For the record, no pedestrians, moms with strollers, parked cars, or storefront windows were injured or damaged in the making of Thorpe’s publicity stunt.)

As the Sarasota Herald-Tribune reported, Thorpe saw business opportunity in streets deserted by urban sprawl to the east and small businesses that were facing competition from shopping centers.

What was needed was a downtown association, so Thorpe helped found one. The newspaper reported that Thorpe worked with business associates, friends and city officials to bring people back downtown. 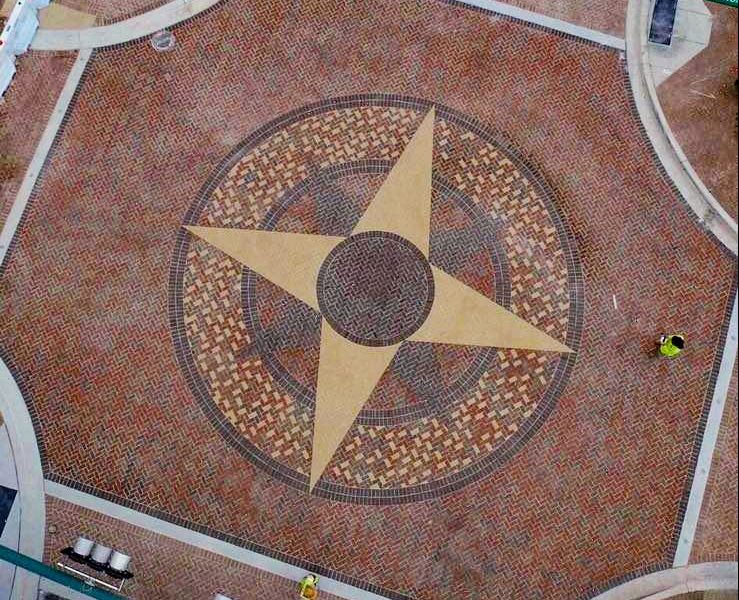 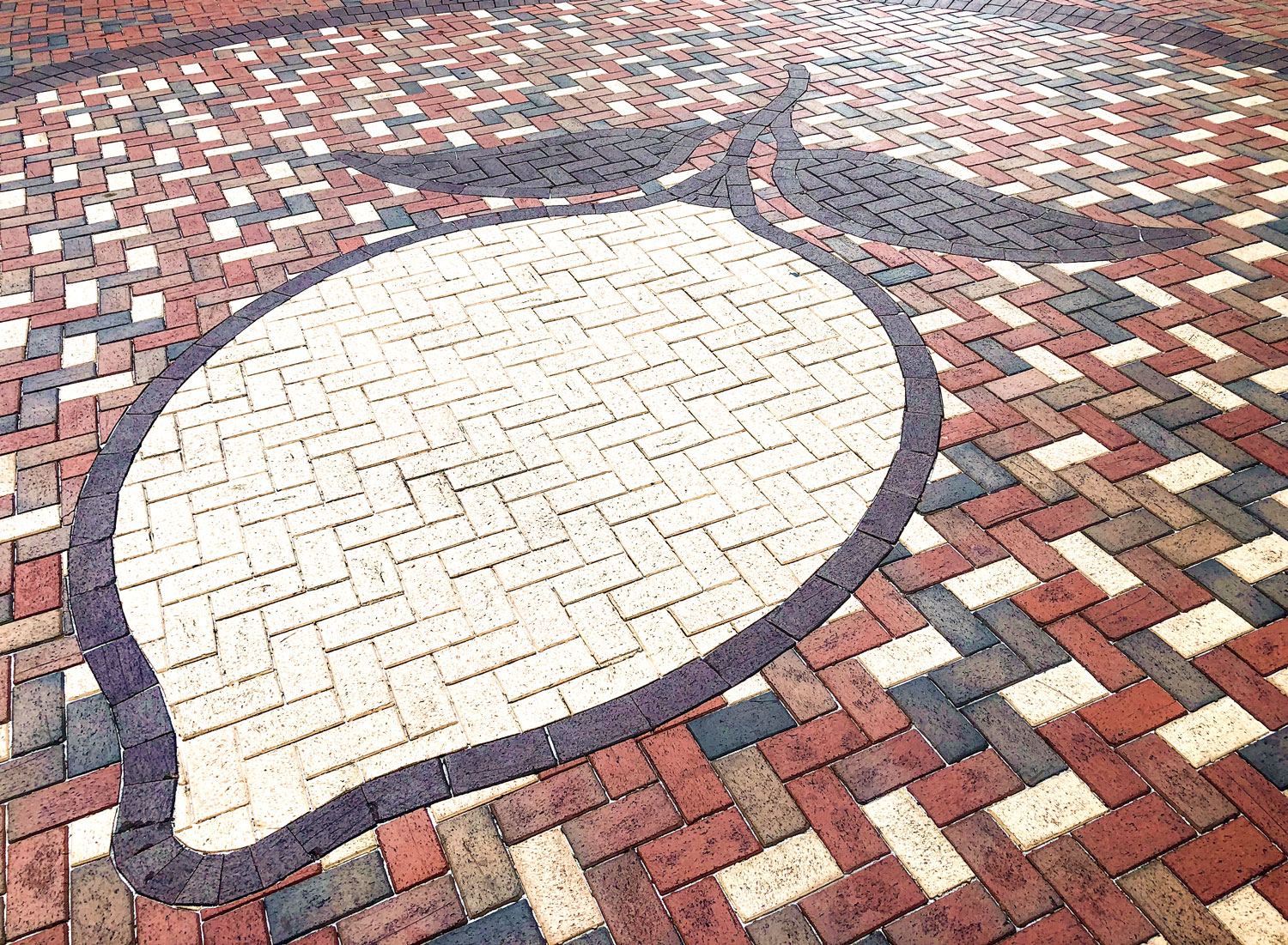 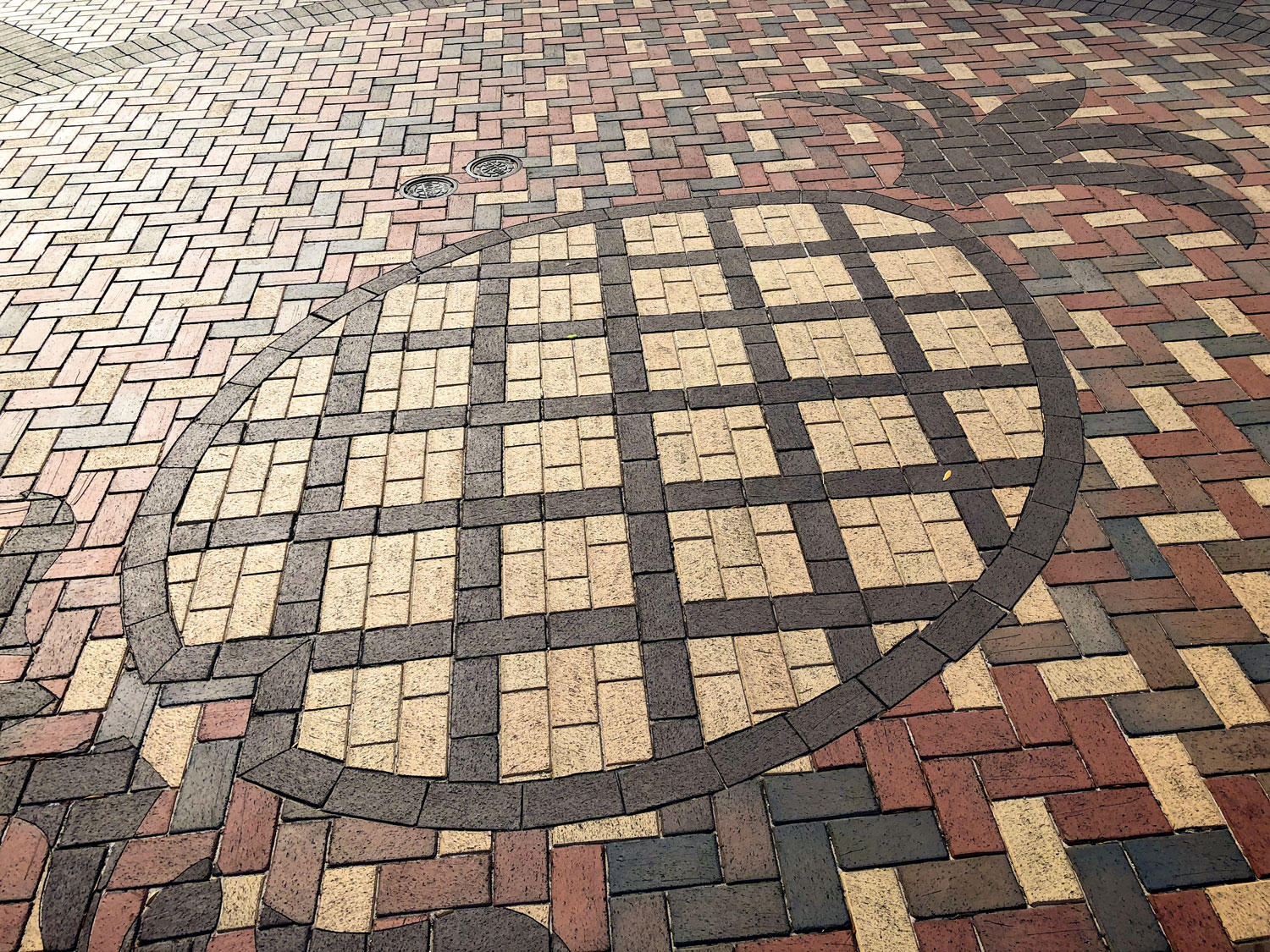 You can look at a street with concrete pavers put in 20 years ago and it’s really faded out because they really wear on the top and you get exposed aggregate. When you use clay pavers, they don’t fade and they don’t wear. It’s just a better product to put in a roadway.
Trudi Evans

“A few ‘handshake deals’ launched the first farmers market and Sarasota Grand Prix boat races, both of which are such staples of downtown now that it’s hard to imagine the city without them, city officials and community advocates agree,” reported the newspaper.

And the New Year’s Eve Pineapple Drop, the holiday parade, celebrations on Memorial Day and the Fourth of July, among many other things. Downtown was transformed into a booming residential, shopping and entertainment district, so it made sense that the city would move to rename a park after Paul N. Thorpe Jr. , who had come to be known as “Mr. Downtown.”

The park was dedicated in July 2017, several weeks before Thorpe passed away at the age of 91. At the dedication, Thorpe spoke to a gathering of about 100 people.

“I’m amazed,” an emotional Thorpe was quoted as saying by the Herald-Tribune. “I can’t express how wonderful it feels to be recognized this way.  I’m just grateful people let me help out with downtown.” 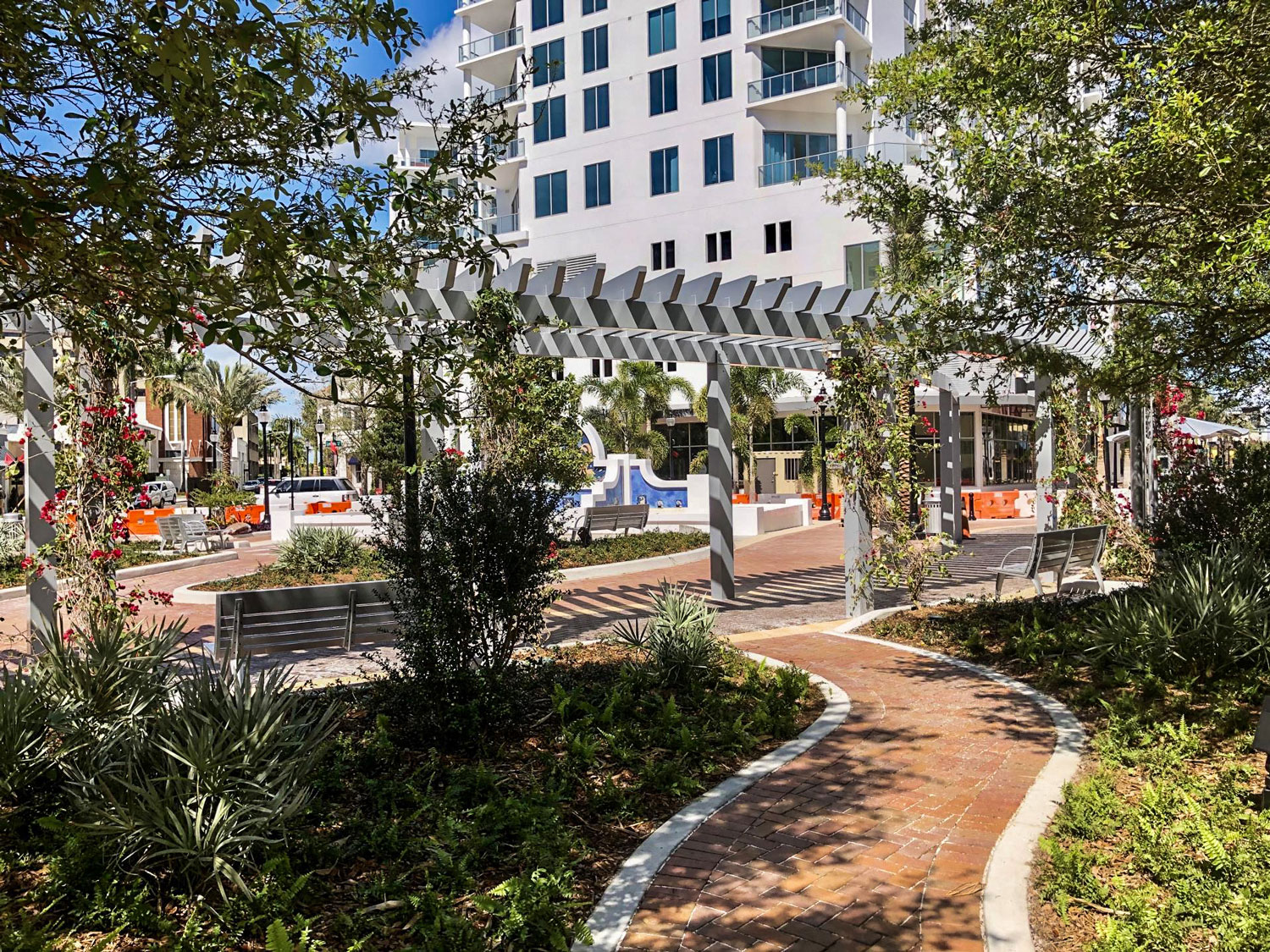 The City of Sarasota originally began upgrading the Paul N. Thorpe Jr. Park, formerly named Pineapple Park, in the summer of 2017. The first steps involved a renovation of mermaid artwork and a fountain. That was followed by a clay paver pedestrian pathway and seating area, along with additional trees and an impressive trellis, where visitors can walk under flowering vines. The improvements provided an open area for residents and visitors alike to gather and enjoy the outdoors in an urban setting.

The Lemon Avenue Streetscape project, which actually began two years later, was designed with a nod toward Thorpe himself, to provide a more pedestrian-friendly experience in downtown Sarasota, precisely because now, more people had reason to come back downtown.

From Main Street south to Pineapple Avenue, the existing roadway, sidewalks and curbs were removed and replaced with decorative clay pavers, new landscaping and streetlights. Medallions also were handcrafted in three intersections along Lemon Avenue: Main Street, State Street and Pineapple Avenue.  In all, approximately 222,905 clay pavers were used in the project. 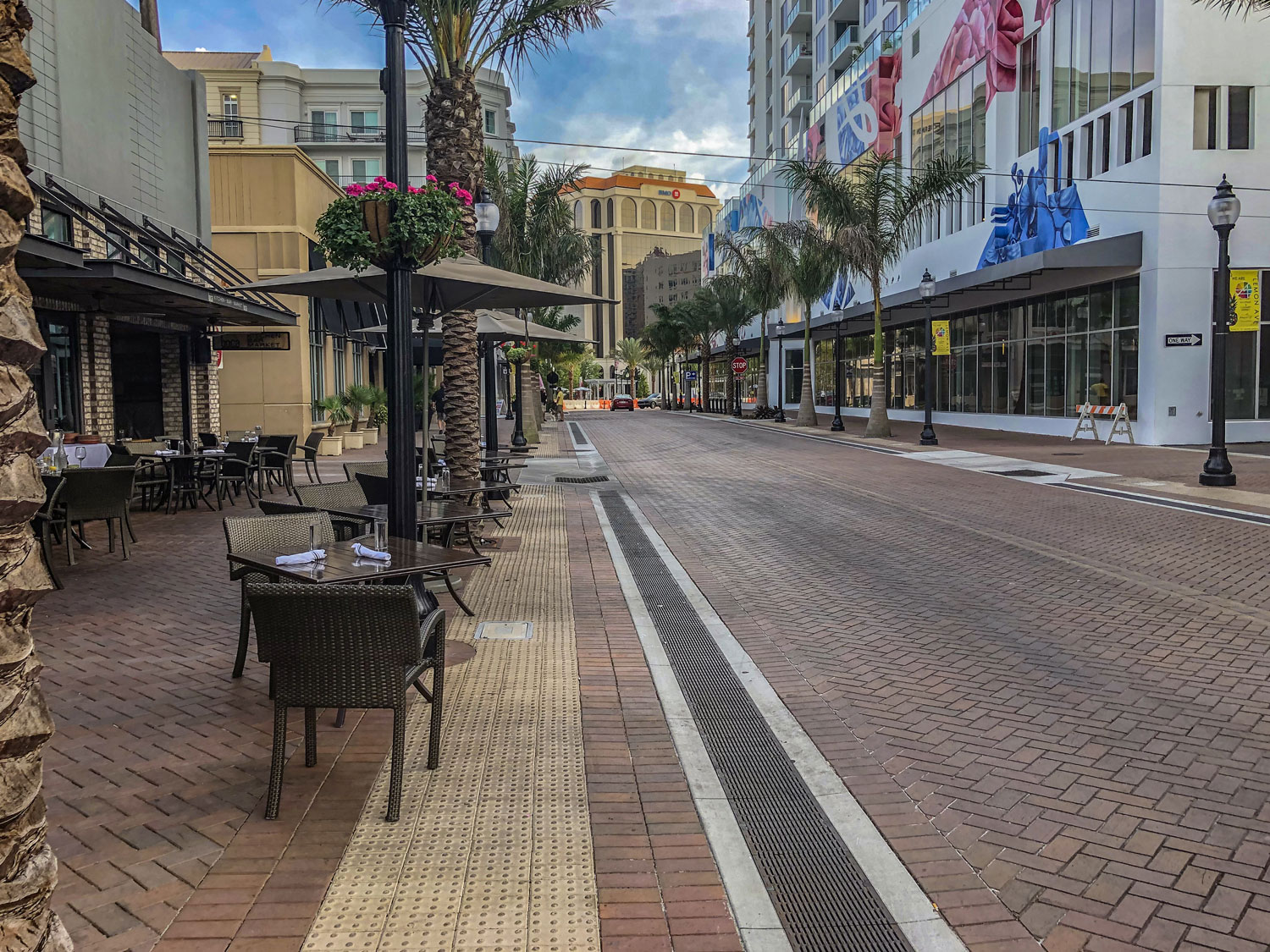 From idea to reality

The idea of using set-in-clay medallions came from landscape architecture firm David W. Johnston & Associates, which won the project – and a design-build contract with Jon Swift Construction – with its proposal.

“We presented a concept plan with the idea of the medallions,” said Phil Smith, who is a David W. Johnston principal and landscape architect. “We’ve been using Pine Hall Brick pavers on roundabouts and walkways and we wanted to do something different on Lemon Avenue.”

Smith’s firm produced full-size templates for the street-sized art.  As it turns out, the process of installing the pavers involves more standing up, sitting down and kneeling than there is in a typical Episcopal church service.

Pavers were provided by Coastal, a subsidiary of Oldcastle APG.

Trudi Evans, owner of the paver installation firm Preferred Pavers and Concrete, said the process is different from an ordinary paver project.

“We laid the field, then we laid the stencil down to mark and cut the pavers,” said Evans. “It’s a lot of working on your knees marking and cutting and then getting up to make sure you’re putting the colors in the right spot and then getting back down to work.”

Evans’ firm has local experience with paver art, including a football, a baseball and several compass designs, which are popular with some homeowners. 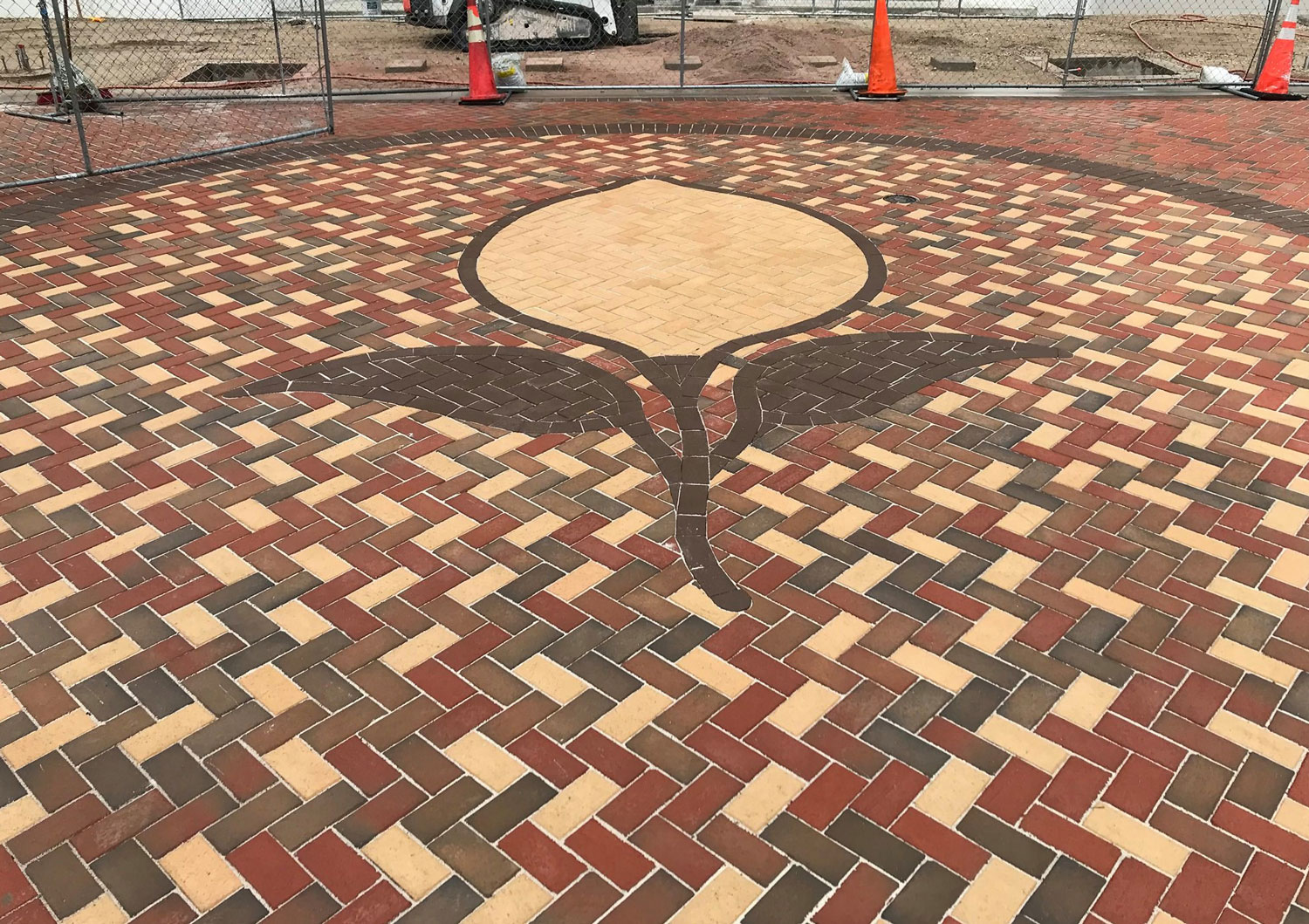 “They did a good job of finding a range of colors from really dark to really light,” said Evans. “The range of clay paver colors may not be as great as concrete pavers that are using the artificial dye. But using clay is far superior to using the concrete product.”

Preferred Pavers has done both.

“You can look at a street with concrete pavers put in 20 years ago and it’s really faded out because they really wear on the top and you get exposed aggregate,” said Evans. “When you use clay pavers, they don’t fade and they don’t wear. It’s just a better product to put in a roadway. “

“For every project we’ve done in the city, we’ve always pushed clay,” said Smith. “It’s colorfast, we like the density of it for longevity. Then there’s the maintenance, which is much lower. It’s my personal preference. Color fast. Excellent quality. I use clay whenever possible.”