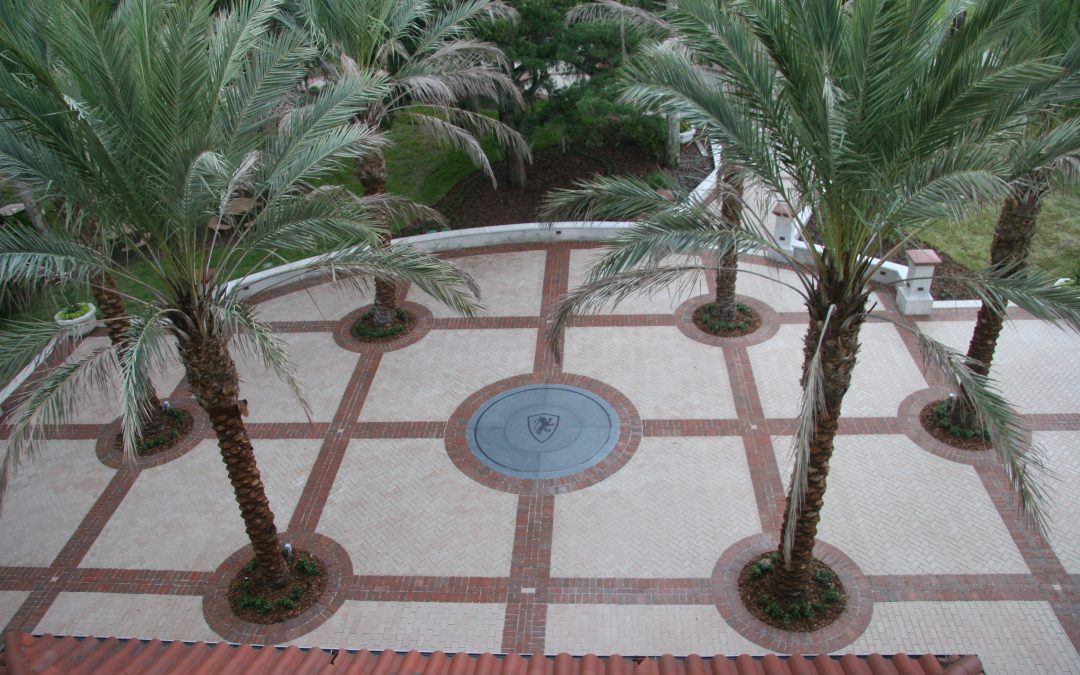 Made of Pine Hall Brick Company’s StormPave® permeable pavers in Autumn and Accent Gray, the 5,000-square-foot project has anchored the campus of Flagler College, a private college in the heart of St. Augustine, Florida, since 2010. The pavers have continued to provide stormwater drainage and have not faded, despite being in place for more than a decade, which show evidence of durability and aesthetics for the long term.

The category, which was added to the contest for the first time this year, honored projects that were installed prior to 2011.

Each year, contractors, producers and designers vie for top honors in the trade show, which recognizes the best hardscape projects, including walkways, patios, pool decks, outdoor kitchens and driveways as well as commercial plazas and streets. The Vintage Installation category was intended to honor projects that have been in place for ten years or more.

“We were proud to have been a part of the Plaza at Kenan Hall project,” said Doug Rose, paver business manager for Pine Hall Brick Company.  “It’s an excellent addition to that campus and at the same time, it’s an example of the beauty and durability of clay brick products, because it was installed in August 2010 and hasn’t faded.”

The number of entries received from across North America continues to grow. In 2021, a record 178 projects were submitted across 18 hardscape categories, including concrete paver, clay brick, segmental retaining walls, porcelain, natural stone, vintage installation, outdoor living features, and a combination of hardscape products.

“The HNA Awards is a well-earned tribute to work that is elevating the hardscape industry in many ways,” said Dr. Marshall Brown, ICPI Chair. “Being recognized are projects that are the result of exceptional teams delivering creative solutions, quality products and reliable installations.” 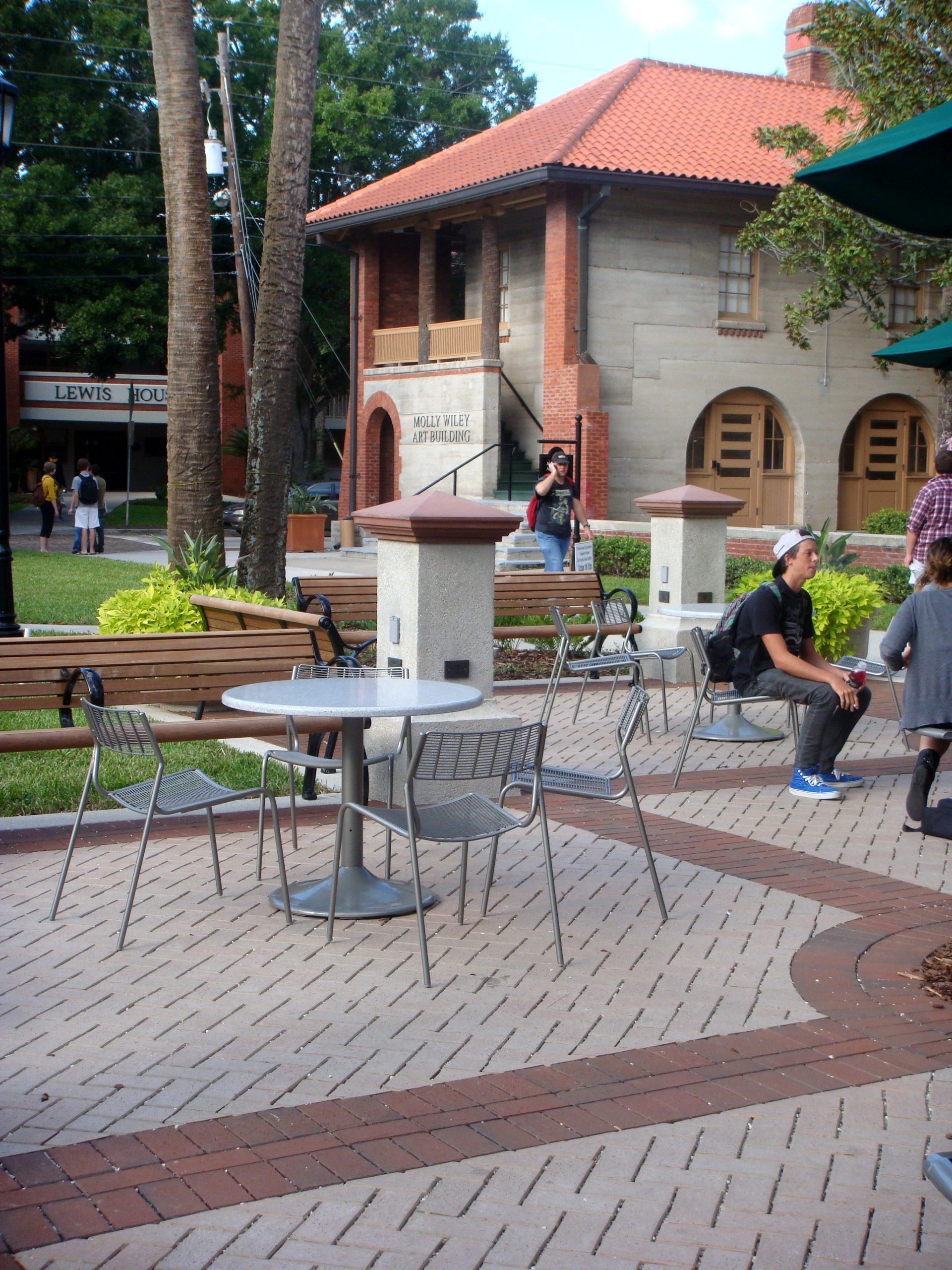 The Plaza At Kenan Hall

Made of Pine Hall Brick Company’s StormPave® permeable pavers in Autumn and Accent Gray, the 5,000-square-foot project anchors the campus of Flagler College, a private college in the heart of St. Augustine, Florida. At the center of campus, the college decided to build an outdoor gathering space of multi-colored pavers that would complement white and terra cotta colors in the adjacent 1800s era classroom building, Kenan Hall.

The building is part of a National Historic Landmark, the original Ponce De Leon Hotel.

The part that is now Kenan Hall was home to the seasonal employees of the hotel. The complex was a draw for the wealthy who would travel, along with their servants, from the cold Northeast to spend the winter months in the Florida sunshine.

Because the owner of the hotel, Henry Flagler, was friends with Thomas Edison, the hotel had electricity before the White House did and, because he was friends with Louis Comfort Tiffany, all of the stained glass windows are of Tiffany glass. In those days, hotel guests were among the leaders in American business and political life.

(Henry Flagler was himself well known as a business leader. The co-founder of Standard Oil with John D. Rockefeller, Flagler turned his attention in later life to developing Florida as a vacation destination. He is widely known as the father of Miami and Palm Springs.)

In addition to satisfying the architectural design requirements of the historic district, the project also had to come up with a solution for persistent drainage problems.  As it was, stormwater flowed toward the building entrance, which meant students and faculty had to walk through standing water when it rained.

The City of St. Augustine has forbidden any new tie-ins to its city drainage system and requires all new construction to keep its storm drainage on site. In the past, the school has used underground exfiltration systems, which look similar to plastic Lego boxes; but made the call to use the permeable pavers in a best-practices installation instead, which costs about the same amount but are more aesthetically pleasing.

The goal was to provide a beautiful place for students to meet with friends, have an informal study session or attend an outdoor musical concert, while at the same time having a place that takes rainwater away and filters it naturally into the groundwater underfoot. It has passed both tests with flying colors for a decade – and promises to do the same for decades to come. 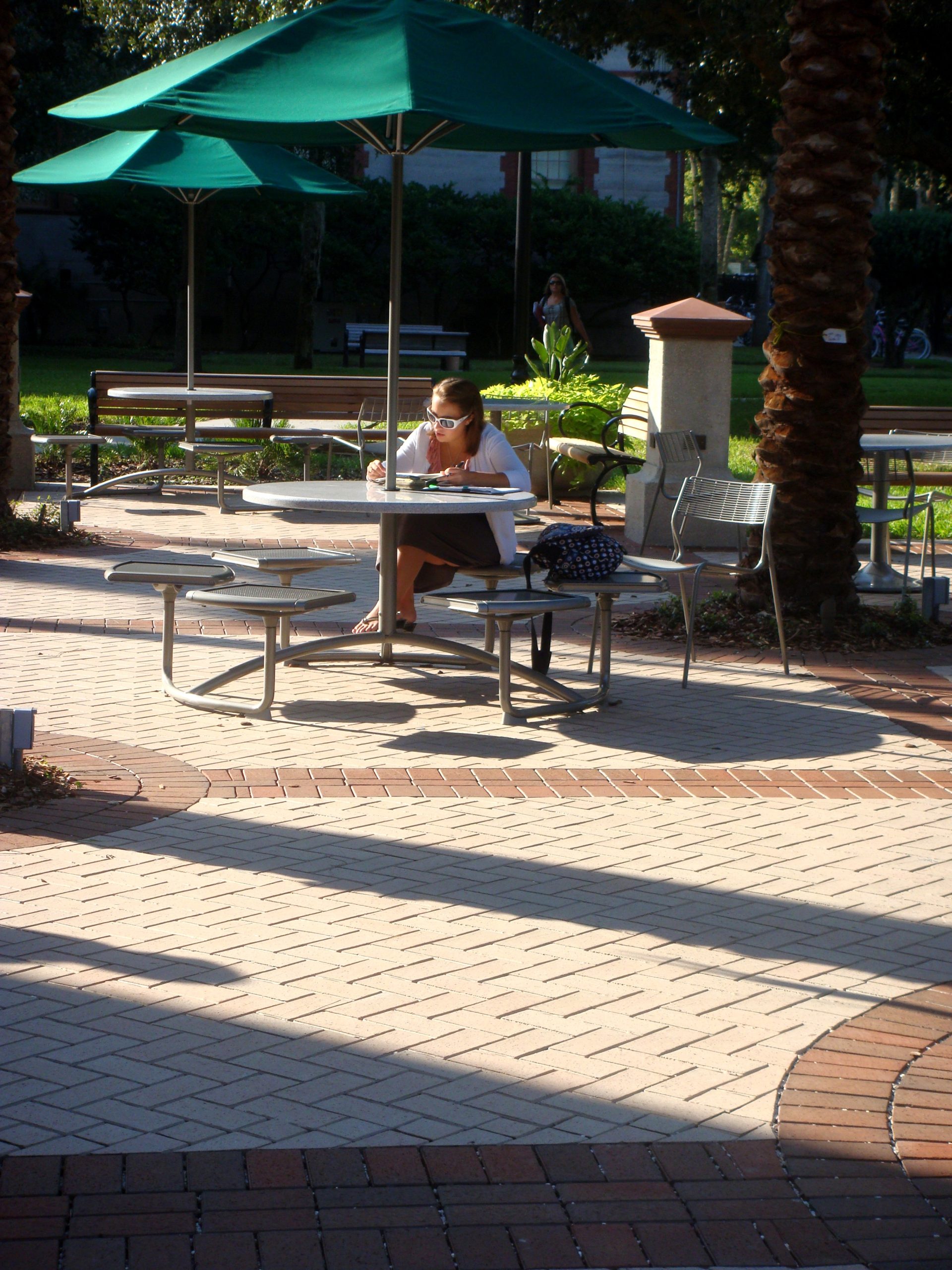