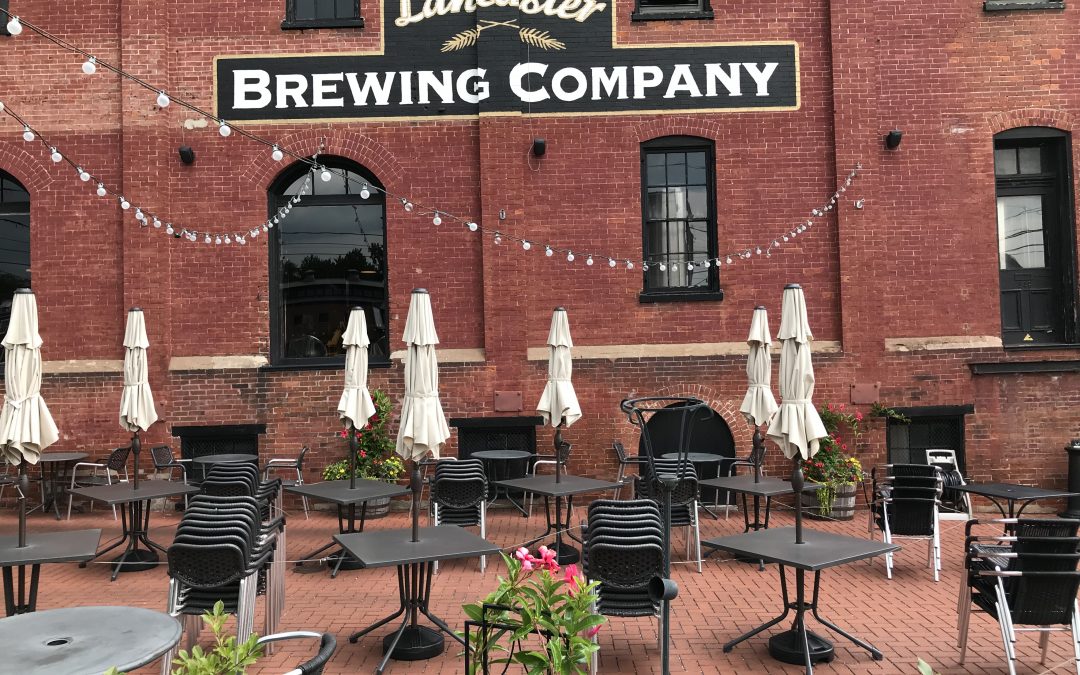 Permeable pavers from Pine Hall Brick Company work well to absorb stormwater into the ground, filter it of pollutants naturally and fulfill regulatory requirements that stormwater be treated on site, making it a favorite of large-scale installations such as municipalities and college campuses.

Some maintenance, including vacuuming and replacing the chip stone that goes in between the pavers, is required. But deferred or delayed maintenance, could result in clogged drainage and costly re-installation. In October, Stormwater Solutions magazine reported on a new method of deep cleaning permeable paver installations, using a five-year-old installation of Pine Hall Brick Company StormPave pavers in Red and Buff colors as an example, along with a separate, scientifically conducted experiment conducted by civil and mineral engineers at the University of Toronto.

Both used the Typhoon System by Pave Tech, which uses strong blasts of compressed air and a vacuum to blow the joints clean of chip stone all the way down to the setting bed. Both concluded that the method restored water flow to original specifications, which for a best-practices StormPave installation is 60 feet of rainwater per hour. 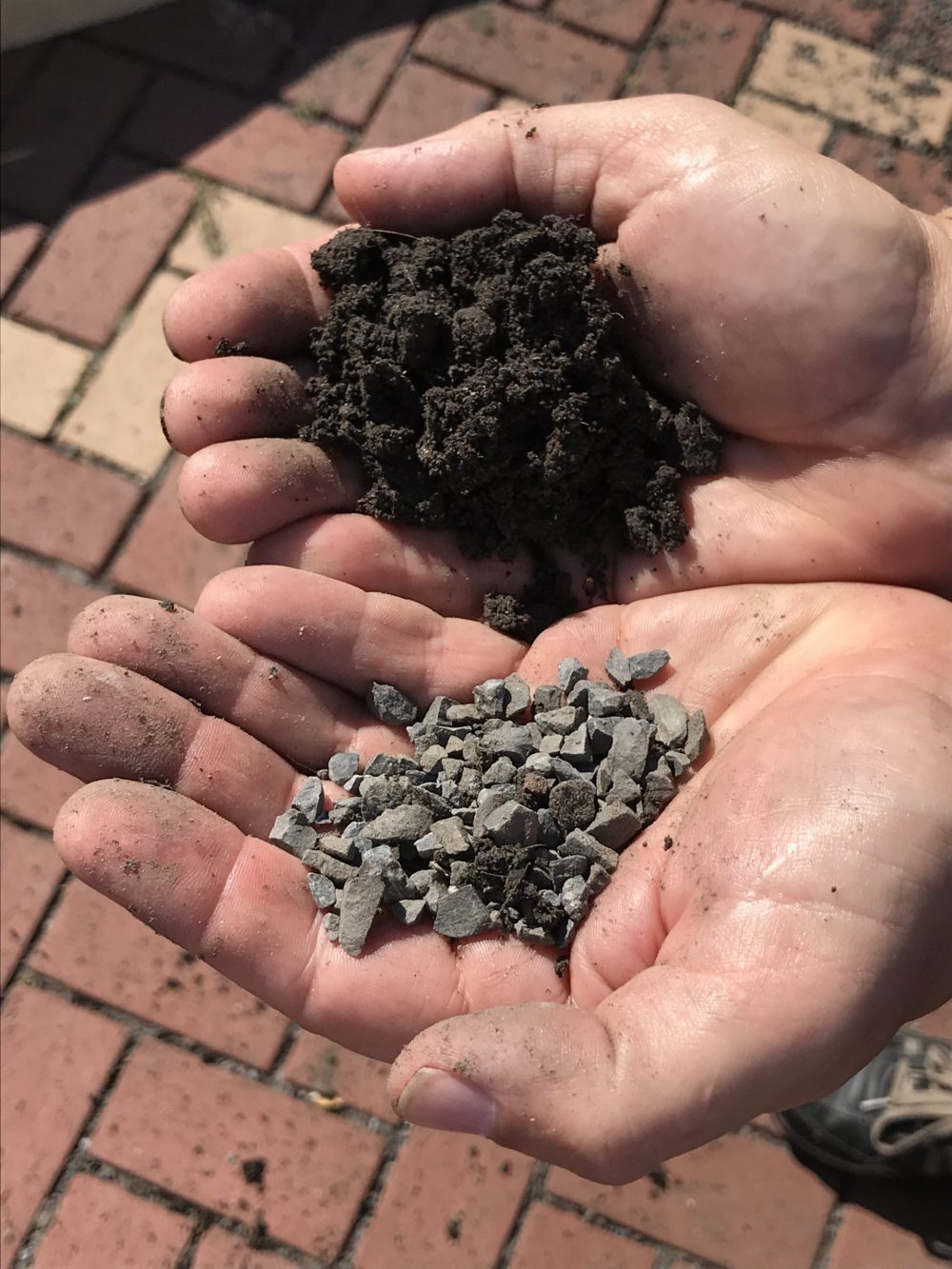 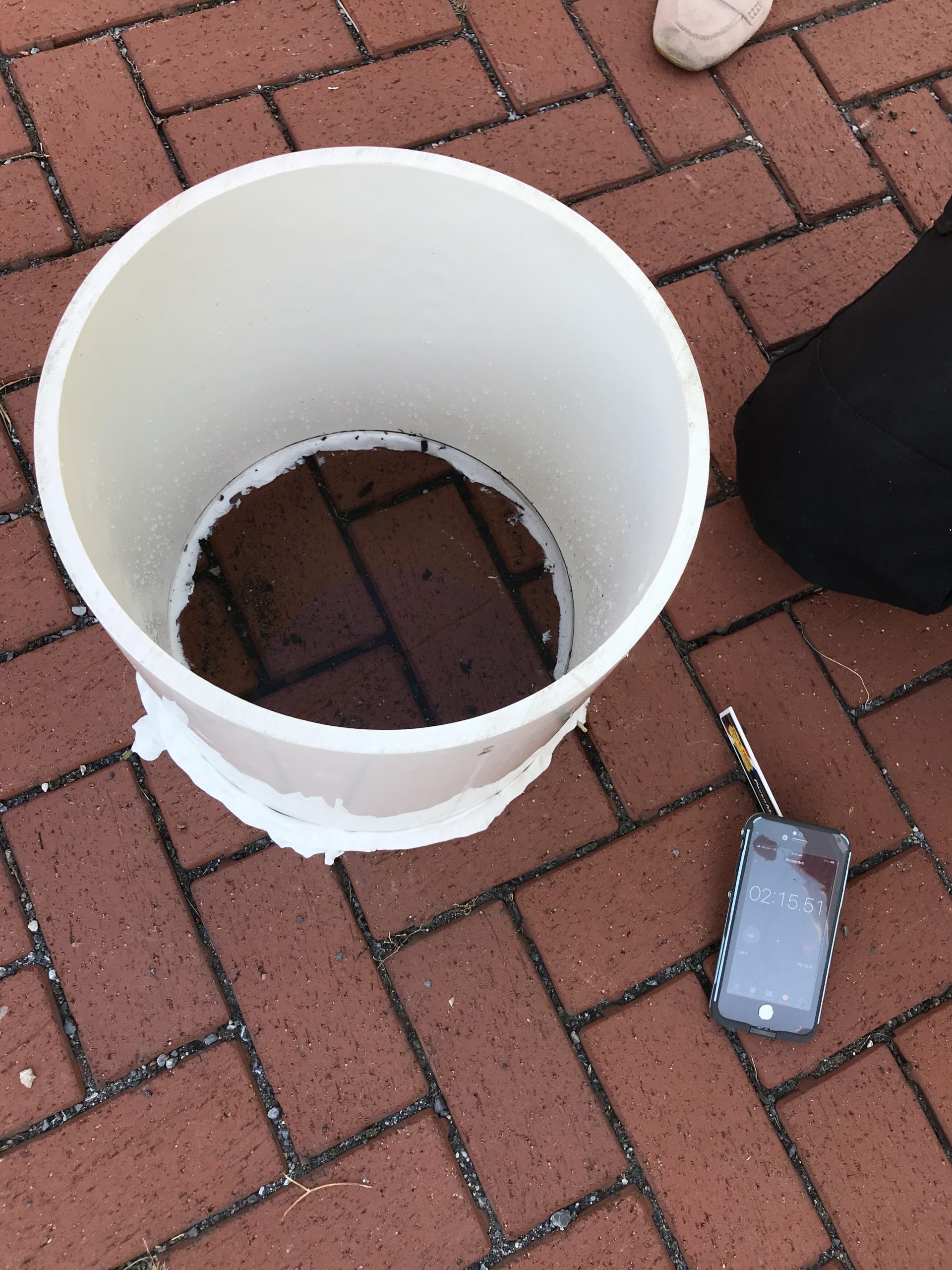 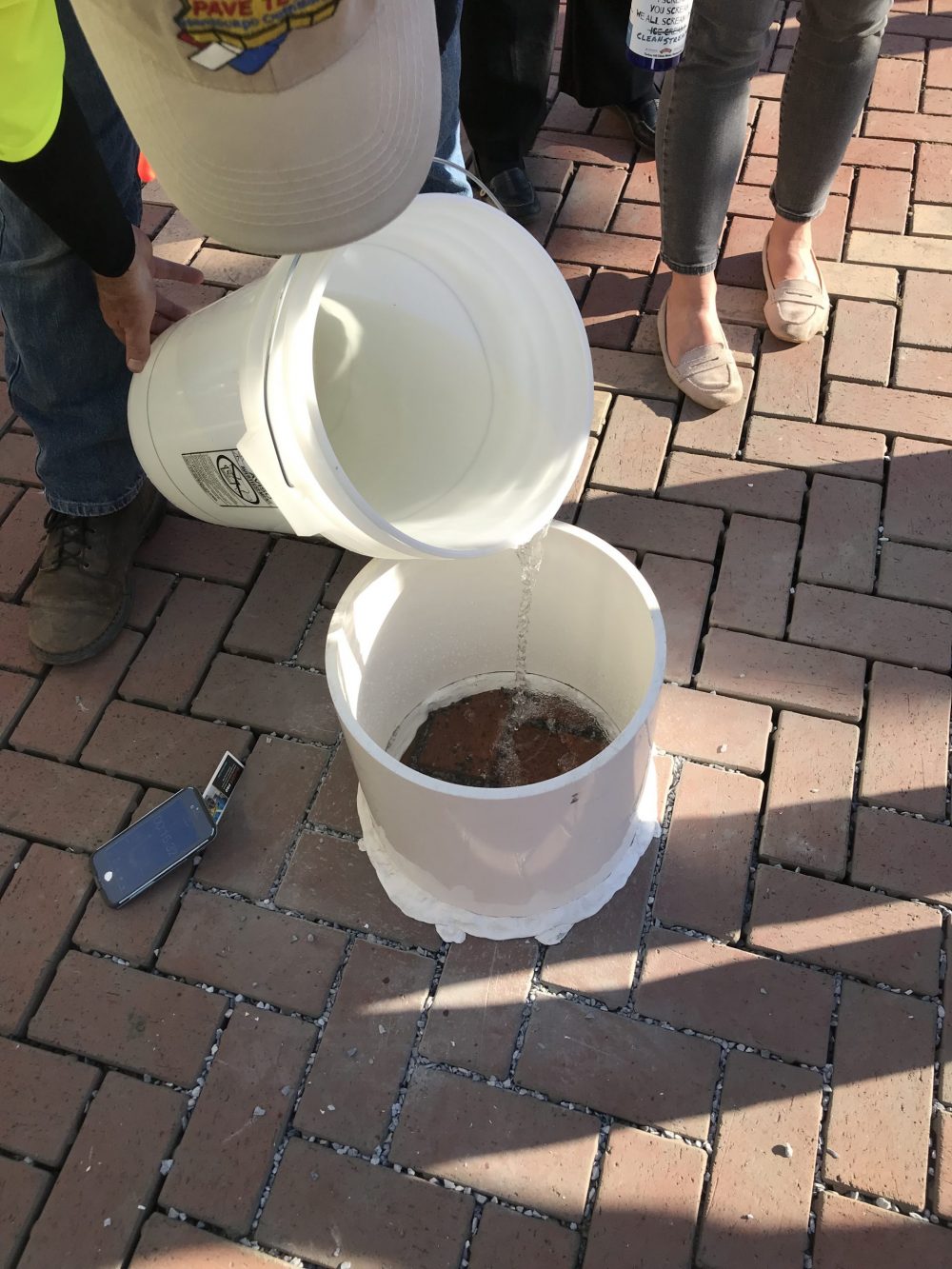 Permeable segmental paving – using a field of precisely spaced pavers atop a bed of precisely layered aggregates – has really come into its own as a method of treating stormwater on site, by directing it into the ground underneath or by catching it and redirecting it for use in irrigation.

The system effectively reduces the volume of stormwater going into sewage treatment plants. That enables municipalities to follow Environmental Protection Agency regulations, and at the same time, can help save taxpayer money because municipalities can postpone, or even potentially eliminate, investing in more wastewater treatment capacity.

The system also has three added bonuses: Genuine clay permeable pavers are, arguably, more aesthetically pleasing than the alternative. They can be removed and set off to one side if you need to dig down to repair utilities, then reinstalled, instead of putting in an ugly patch. Finally, in cold climates, a properly operating clay permeable paver system is durable and outlasts repeated freeze-thaw cycles; and it helps limit black ice, because snowmelt doesn’t pool up and refreeze, which makes walking outdoors safer.

But a “properly operating” system isn’t automatic. Regular maintenance is required. If the system gets clogged, it usually requires removing the pavers and re-setting them to restore stormwater flow to the same rates as when the system was installed, which is labor intensive and expensive.

Pine Hall Brick, America’s largest manufacturer of clay pavers, partnered with Pave Tech and its Typhoon System, to demonstrate how the spaces between permeable pavers can be effectively cleaned through a combination of compressed air and a vacuum. The demonstration was held in the fall of 2019 at an installation of Pine Hall Brick’s StormPave permeable pavers in Lancaster, PA, which had been installed five years earlier. Architects, landscape architects, city officials, engineers and others were invited to observe.

The Typhoon System uses strong blasts of compressed air that blows the joints clean clear down to the setting bed, effectively removing both the joint stone and the very fine debris that is suspended in the joints. The debris is then vacuumed and fresh stone is swept into place.

In addition to the demonstration in Lancaster, the system similarly earned high marks in a separate demonstration, this one a scientifically conducted experiment conducted by civil and mineral engineers at the University of Toronto.

Both tests showed that a clogged permeable paver installation was substantially cleaned and again able to drain stormwater at approximately the same rate that it was when first installed. 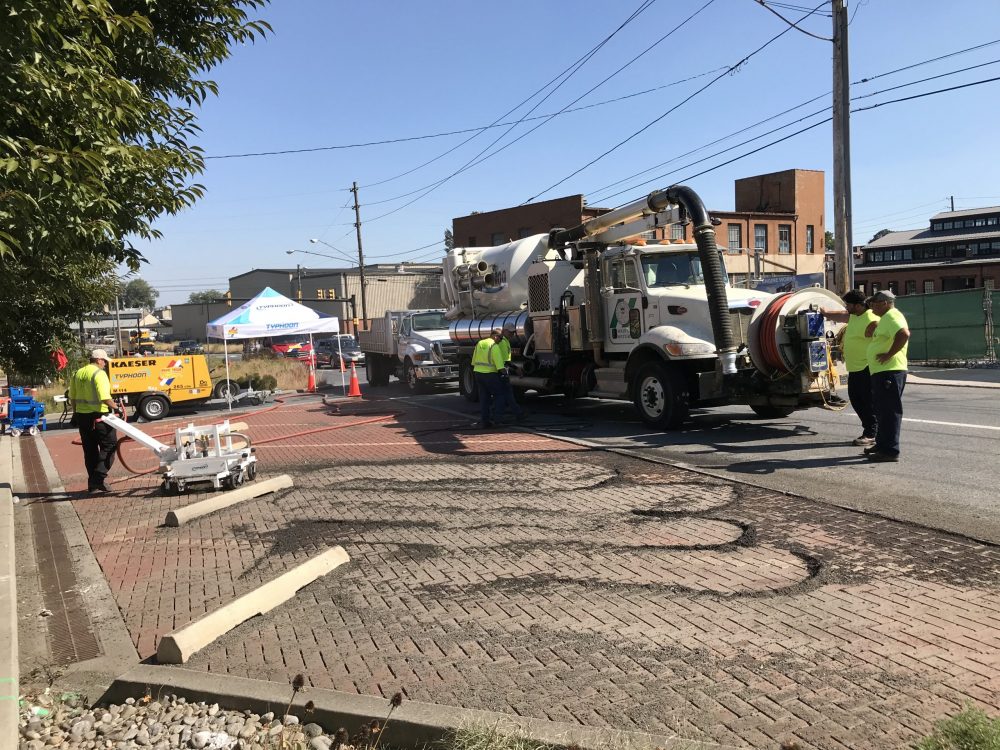 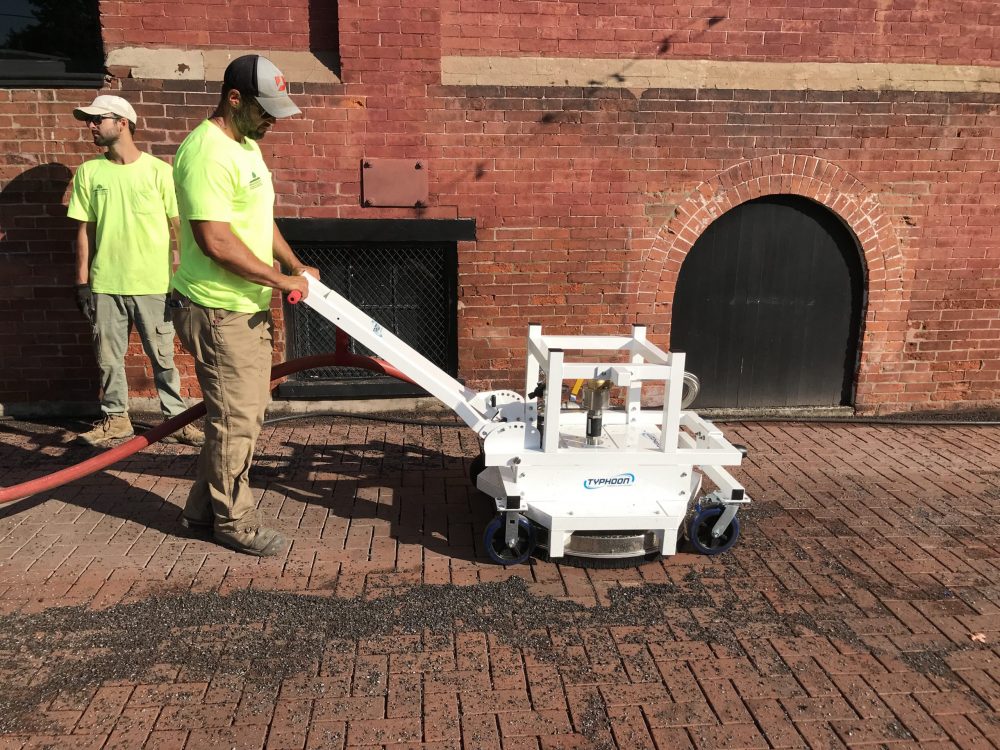 A project to restore water permable performance in Lancaster

The intersection of East Walnut and North Plum Streets in Lancaster, PA was prone to flooding during rainstorms, which flowed into the combined sewer system and then into waterways during high-volume periods.

The City of Lancaster, which has an older drainage system that combines stormwater and septic sewer, was under increasing pressure from the U.S. Environmental Protection Agency to reduce raw sewage overflow. On a rainy day, the combination of stormwater and sewage overwhelms the treatment plant and dumps untreated sewage first into the Conestoga River, then into the Susquehanna River, and finally then the Chesapeake Bay.

The solution was to build several permeable paver installations. Among them was a large outdoor patio and parking stalls at Lancaster Brewing Company, which is adjacent to the intersection of East Walnut and North Plum Streets.  The project, which used Pine Hall Brick’s StormPave pavers in red and buff, was installed in 2014.

The project was named a Top Projects Award Winner by Stormwater Solutions (https://www.estormwater.com/plum-walnut-intersection-improvement-project), along with a “BUBBA,” (Best Urban BMP In The Bay Award), which recognizes the best urban BMPs installed in the Chesapeake Bay watershed.

But by September 2019, the parking stalls were not absorbing rainwater at all and weeds were seen growing from the joints, even though it was routinely swept with a sweeper vac truck from the city. The patio was absorbing some rainwater, but not as much as it did when the system was first put in.  The new system – which appears similar to a push lawn mower – was brought in and blew the joints clean, down to the setting bed, removing both the joint stone and the very fine debris; then, the joint stone and debris were vacuumed from the surface.

More joint stone was swept into the joints and a re-test showed that surface water was again infiltrating into the patio and parking lot surfaces at the same rate as when it was installed.

That test concluded that the new system was powerful enough to loosen the hardened crust of fine debris and thus reopen water flow, which ordinary vacuuming alone was not able to do. 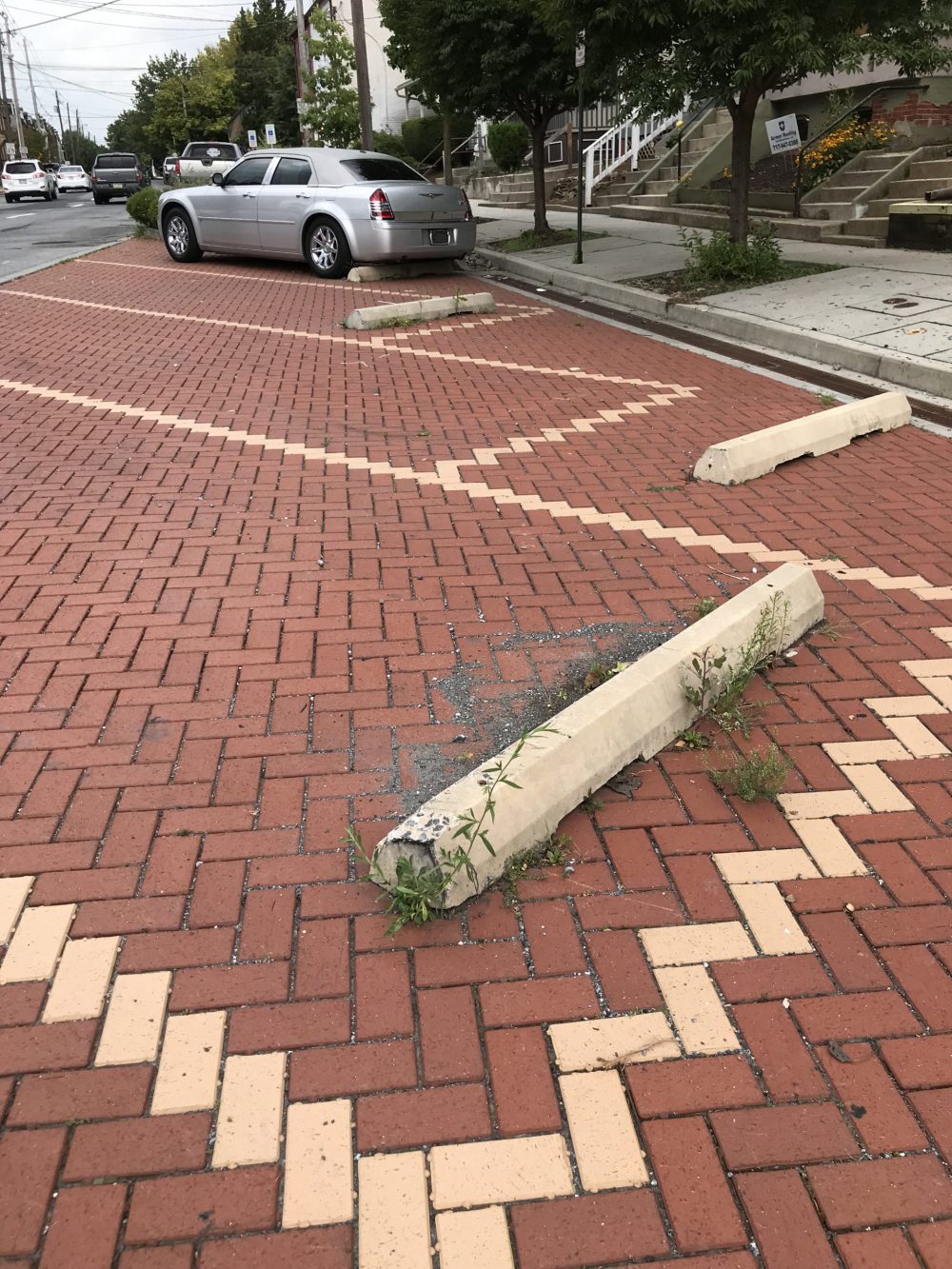 Testing at the University of Toronto

The University of Toronto’s Department of Civil & Mineral Engineering took a deeper dive into comparing the different methods that are used to clean segmental permeable pavements. An April 2020 study authored  by Jennifer Drake, Ph.D., P.Eng., Talmineh Sarabian, M.A. Sc. P.Eng. and Ph.D. student Jody Scott looked into how to best keep them clean, for a specific reason.

“A lack of proven cost-effective and practical approaches for permeability restoration prevents the widespread adoption of these systems in Canada and North America,” wrote Drake. “Better methods are needed so the required interval between maintenance events can be lengthened and thereby reducing overall lifecycle costs.”

The advantage to the research is that for the first time, a simple-to-implement and repeatable methodology has been devised to clog pavement, which means that researchers and equipment manufacturers can test, evaluate and compare maintenance equipment and experimental results.

To begin, seven  10’ by 10’ cells within a field of permeable pavers were prepared by taking material actually swept off Toronto streets and placing similar amounts within the cells, so that the outcomes would be consistent.

As it was, the pressurized air and vacuum system  produced mean surface infiltration measurements that were two to six times higher than all other tested techniques and restored infiltration to 109 percent of its original condition, or 12,900 mm an hour (or 507 inches.)

There was a significant drop-off seen in the other methods, with the vacuum street sweeper producing the second highest amount of surface rejuvenation but also generating the most variable results.