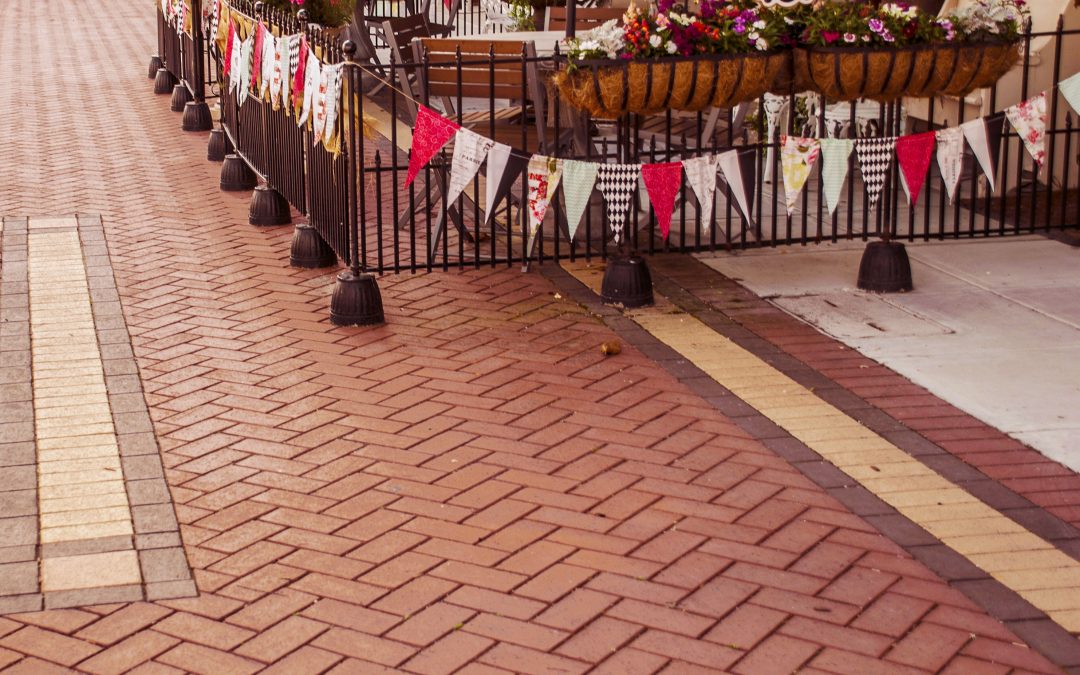 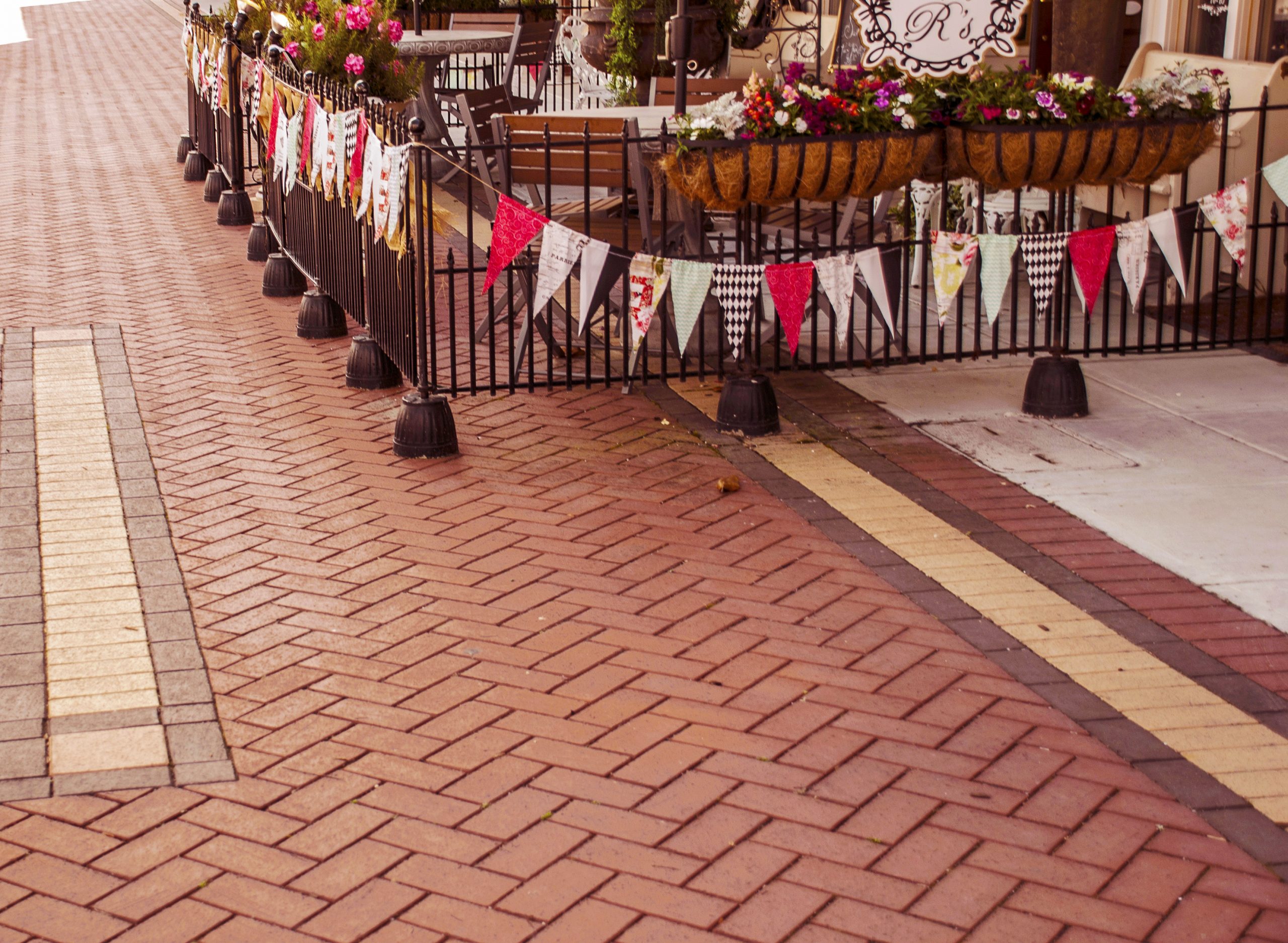 If you look hard enough at Center Street in downtown Goldsboro, NC, you can see the past and the future at the same time.

The past was the railroad, which is the reason the town is there.

The Wilmington and Weldon Railroad was completed in the 1840s. The intersection of the rail line and New Bern Road sparked construction of a hotel, which in turn led to the growth of a community around it. It was first called Goldsborough’s Junction and was named after Matthew Goldsborough, an assistant chief engineer with the railroad line. Railroad connectors to Charlotte and Beaufort helped grow the town even more. During the Civil War, the railroad was seen as vital to Confederate interests and not surprisingly, was often the target of Union attacks intended to cut supply lines.

That railroad is why the right of way on Center Street in downtown Goldsboro is 140 feet wide. The width was to accommodate railroad tracks that ran down the center of the street until they were removed in the 1920s. Even though Center Street is seen as the historic heart of both the downtown district and the city itself, the design – including four rows of angled parking, a narrow concrete median and 12’ sidewalks – meant that almost all of the 140 foot right of way was under pavement of one kind or another. And that meant, also, that downtown began to struggle as businesses and shoppers alike fled the cluttered center city for strip shopping centers and office buildings on the outskirts of town.

What was needed was to find a way to get people back downtown. 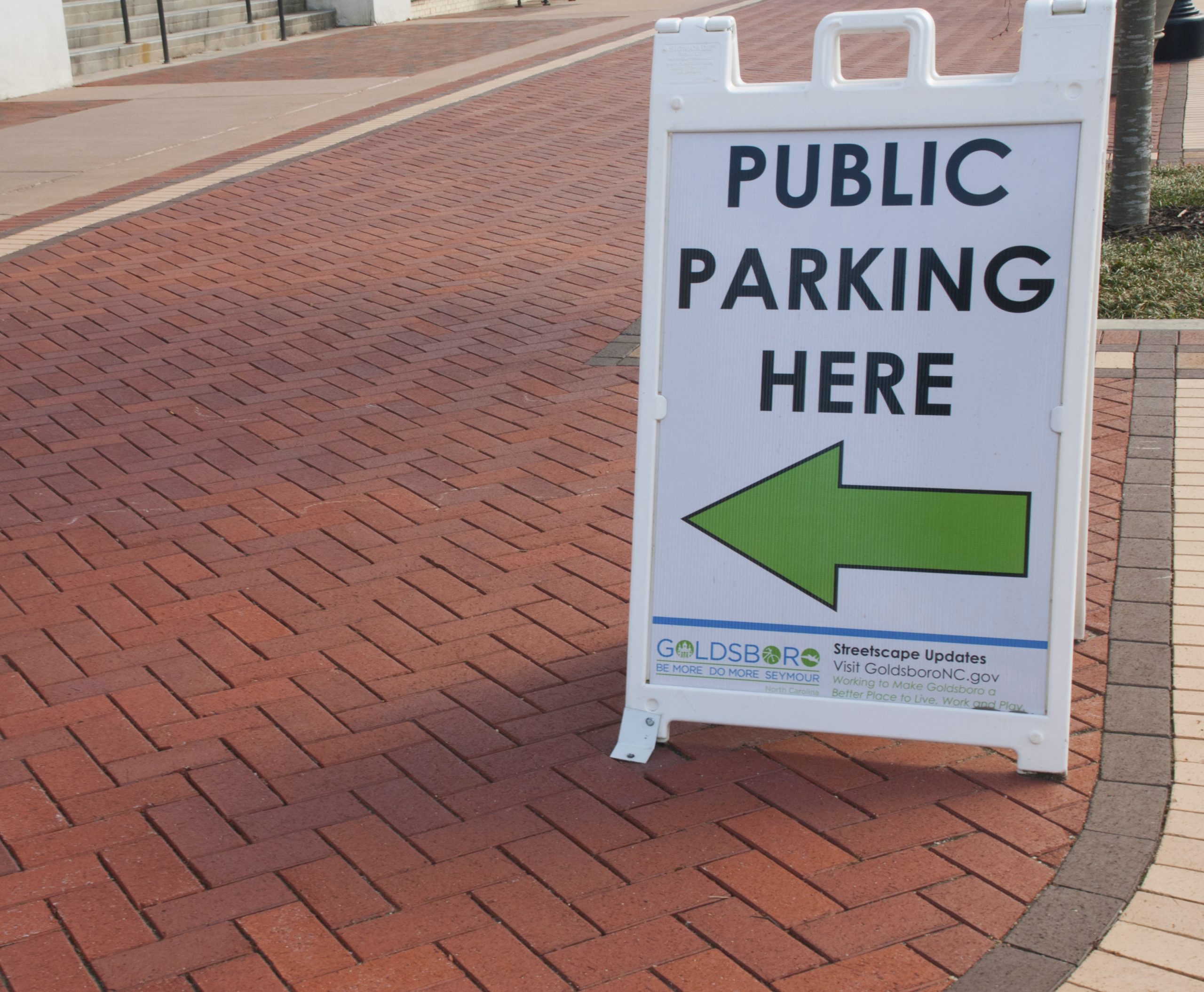 Platt, a landscape architect and urban designer, prepared the master plan which recommended streetscape improvements as a high priority for downtown revitalization. 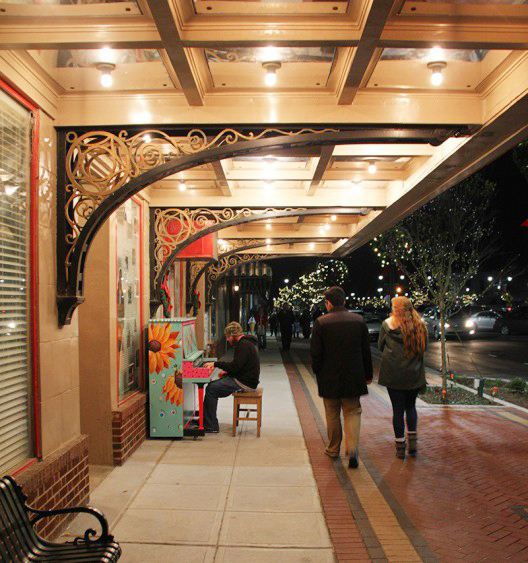 Platt’s design called for widening and redesigning the brick sidewalks from 12′ to 17′ and providing a wider landscaped median on each block. Roundabouts were added at each intersection to allow removal of traffic lights and arms and improve both pedestrian and vehicle safety. Other elements that added to the appeal of the street included wifi service and speakers mounted on new streetlights that allow music to be piped to the street. Bike lanes and bike racks were added throughout the project.

Two different cross-sections of the street were designed. Sections with the highest concentration of existing retail businesses have two rows of angled parking. Sections with less retail have four rows of parallel parking and a wider median. This design allows more parking where it is needed and at the same time, wider medians on other blocks to provide space for festivals, farmer’s markets and other community activities. 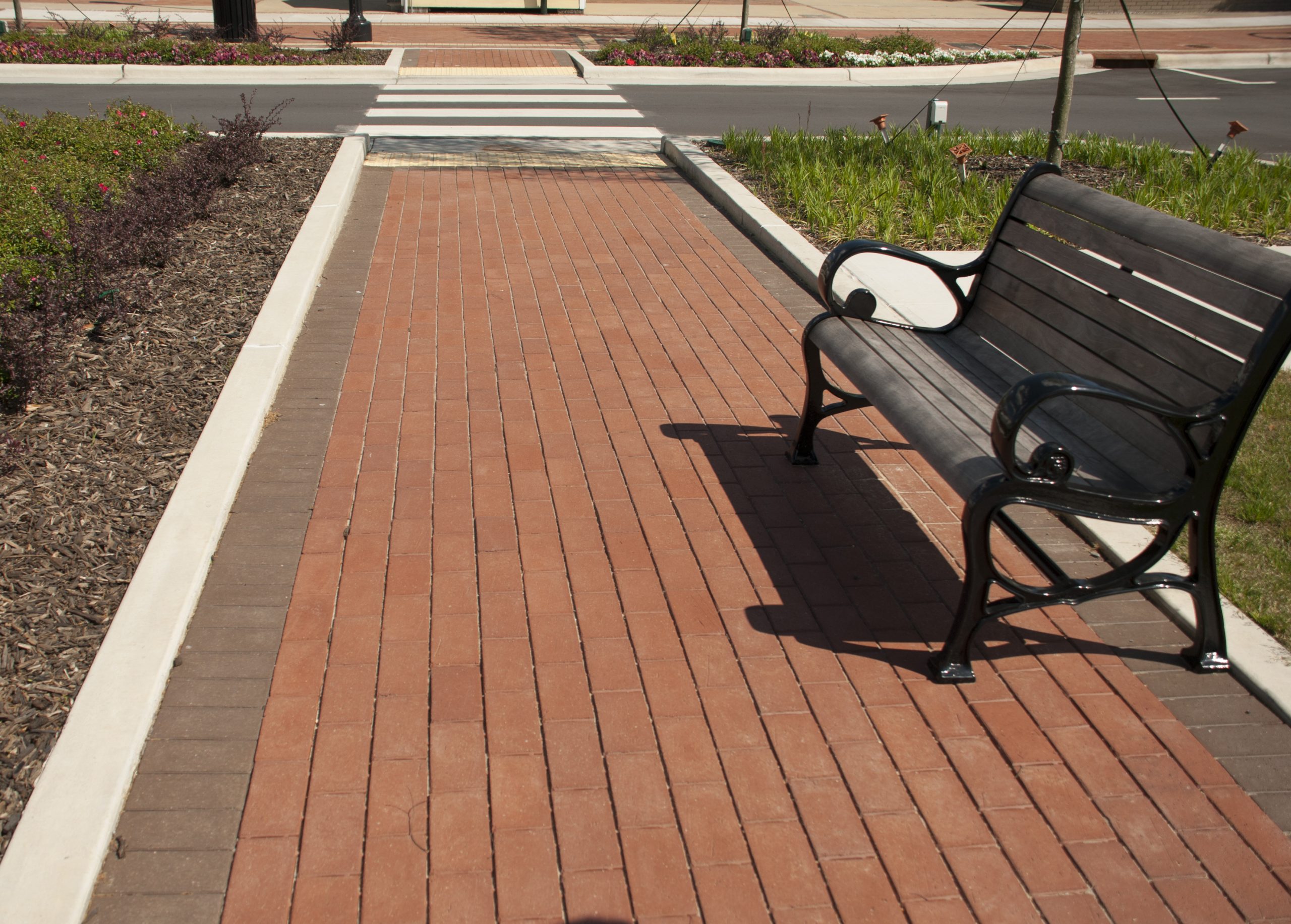 To pick up on existing colors and textures of the surrounding red clay brick buildings, sidewalks and median parks use three colors of Pine Hall Brick clay pavers, with a banded pattern on the sidewalks and varied patterns utilizing the same three colors in the median parks to add visual interest. The pavers are purposefully set on a sand base, which means that when underground utilities need repair, the pavers can be taken out and set to one side, the work can be done and the pavers can be replaced, without damaging the sidewalk or changing its appearance.

In addition to benches and tables throughout the project, brick seat walls enclose the median parks and accommodate additional seating during public events such as parades and festivals.

Green building principles were used throughout the project. The clay pavers themselves are green, in that they are made out of readily available shale and water, do not change color over time and are durable enough to last forever.

In addition to the hardscape installation, new trees were introduced, including Bosque Elms on the sidewalk to maximize views to storefronts, and Willow Oaks in the median to eventually provide a high shady canopy in the warm summer months.

Other examples of green construction include the elimination of pavement, therefore improving storm drainage and increasing water entering the ground, the inclusion of continuous structural soil under the sidewalks to help the trees grow, additional pedestrian space and new bike lanes. 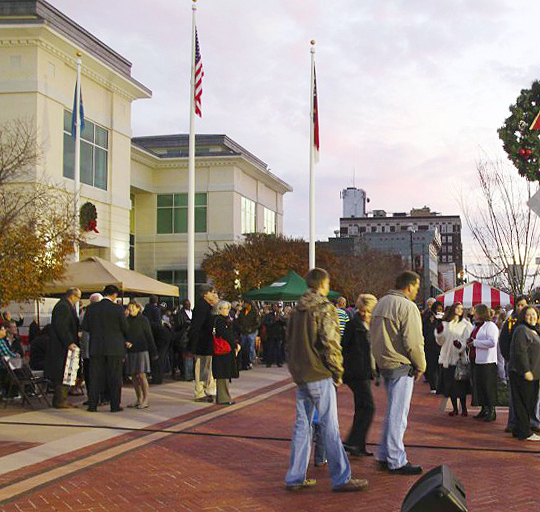 The installation hasn’t been in place that long (Phase One in November 2012, Phase Two in November, 2015), but it has already won awards from the North Carolina chapter of the American Planning Association and the North Carolina Main Street program. And its early success has helped jumpstart the project: based in part on Phase One, the City of Goldsboro won a $10 million U.S. Department of Transportation grant that helped fund Phase Two.

More importantly, people are indeed coming back. The December, 2015 Lights Up! dedication brought an estimated (and record-breaking) 5,000 people downtown. In all, 49 new businesses have opened on or near Center Street and 23 commercial buildings are in the process of rehabilitation since Phase One began, including new opportunities for second-floor residential development. 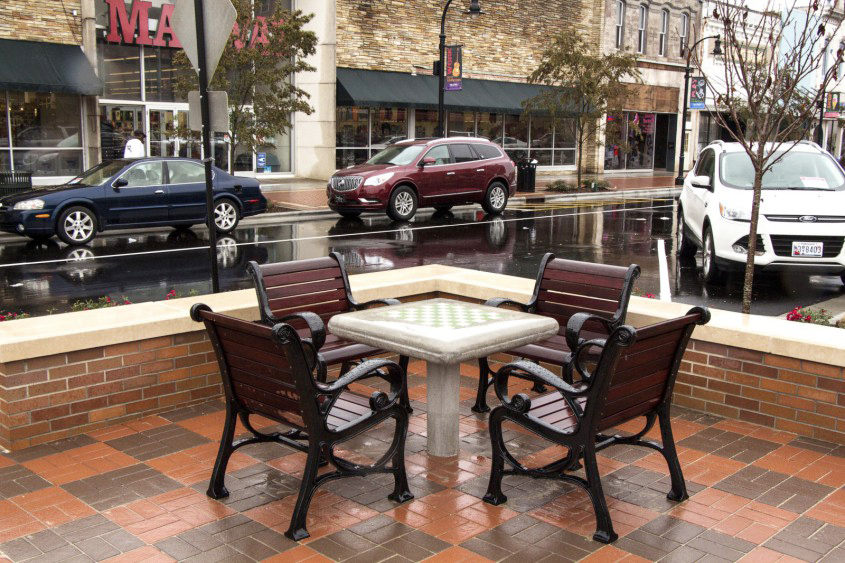