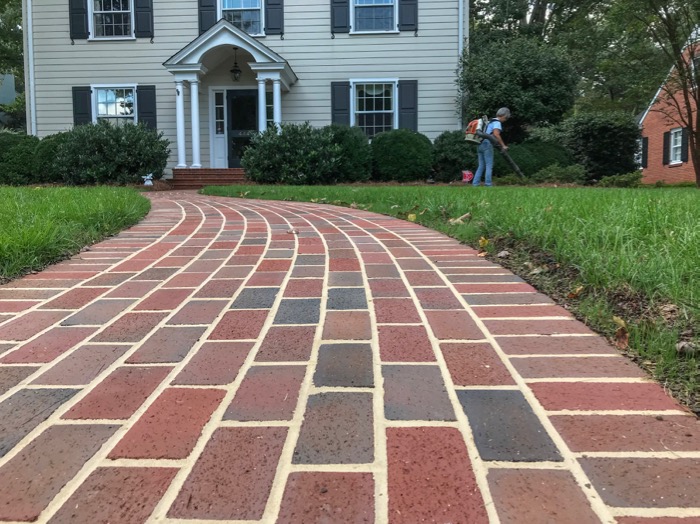 A brick paver walkway improves curb appeal, adds value and makes your home outdoors more inviting for you and your guests.

Walkways and patios can be do-it-yourself projects over a couple of weekends, especially with the sand-set method:  pavers are placed on a bed of gravel and sand. At the end, sand is spread into the gaps to create quarter-inch joints that create paver-interlock. For more information on clay paver systems on a sand setting bed, take a look at the Brick Industry Tech Note 14A

A mortared method can also be used. This can be done as a DIY project if you have some skill in working with mortar and sand, but most of the time mortar jobs are best assigned to the pros like Mark Wooters of Mark Wooters Masonry. 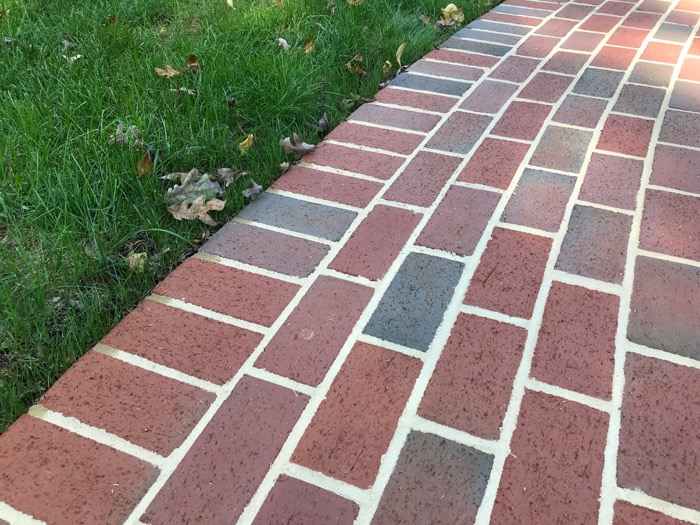 Mark Wooters laid a soldier course along the edge to contain his running bond paver pattern.

Wooters is a seasoned mason who specializes in retaining walls, additions to existing homes, patio kitchens and walkways.

Wooters recently replaced an 85-year-old walkway under the stately oaks of the Buena Vista neighborhood in Winston-Salem, NC. The original brick had become covered with moss and sunk well below grade. 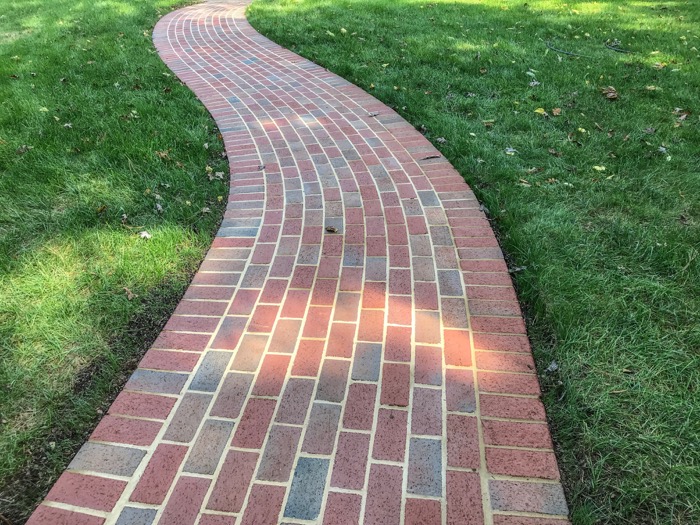 You probably can’t tell by looking at it, but a serpentine paver walkway requires a lot of cutting on the outer bricks along the curves. 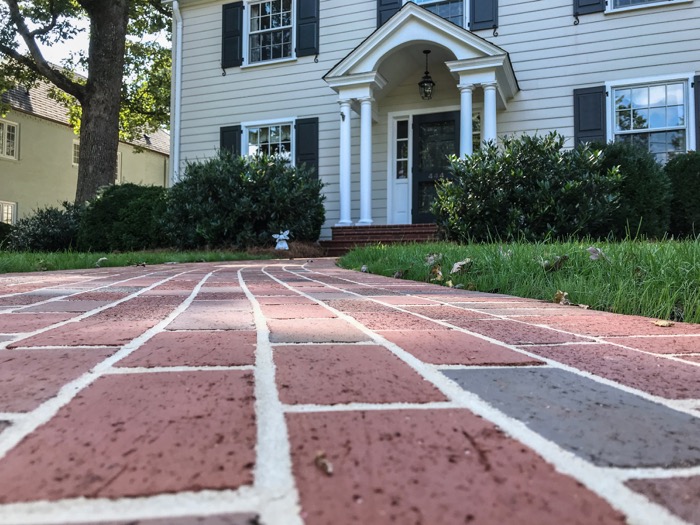 A paver walkway adds curb appeal and beauty you can enjoy every day.

For this job, the homeowner chose Pathway Full-Range modular pavers. Modular is a wire cut brick that is 1 3/8″ thick vs. traditional 2 1/4″  pavers used in sand-set jobs. Wooters recommended khaki mortar because it would better match the older mortar of the front steps and porch.

Once the original walkway was excavated, Wooters re-graded the pathway and laid a base of concrete several inches below grade. This needed a day to dry and cure, then Wooters returned and began setting new pavers on top of the concrete base. This typically requires applying a thick layer of wet mortar over the concrete and then pressing the pavers into the mortar, so it fills the gaps between the bricks. Or, the mason can “butter” each paver and place it with even space all around. Either way, the Mason returns with a pastry bag of wet mortar to top off the mortar. A tool is used to scrape off the excess and smooth each joint. Wooters prefers to make his joints slightly concave to the paver surfaces. 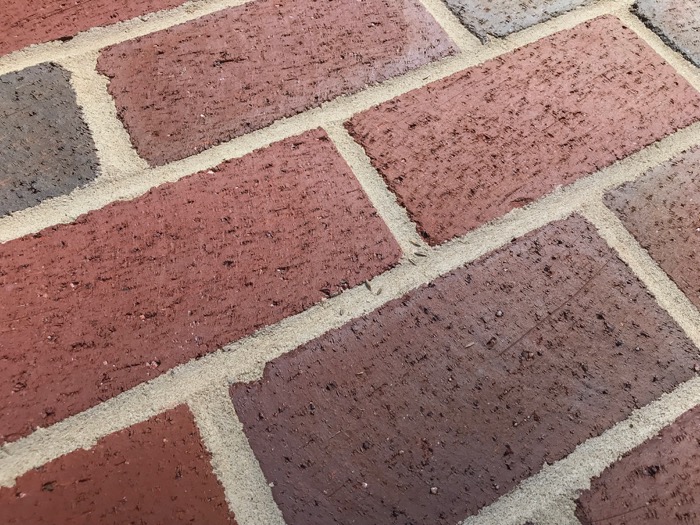 “This looks more finished and gets a cleaner joint,” said Wooters. “And it seals the brick really well.”

It’s difficult to make a basket weave brick pattern on a curved walkway because the edges vary so much. And the existing porch surface is in a herringbone pattern, so Wooters recommended a simple running bond pattern with a soldier course (the bricks laid along the walkway border perpendicular to the paver field).

The homeowners wanted to maintain the serpentine shape of the old brick path, so there was a bit of artistry in making the curves smooth on the edges. Wooters used flexible PVC as forms for this. Also, with s-curves, the outer pavers need to be trimmed by sight to make the turns. When this is done correctly, your eye won’t detect the difference. An optical illusion makes them all look uniform. 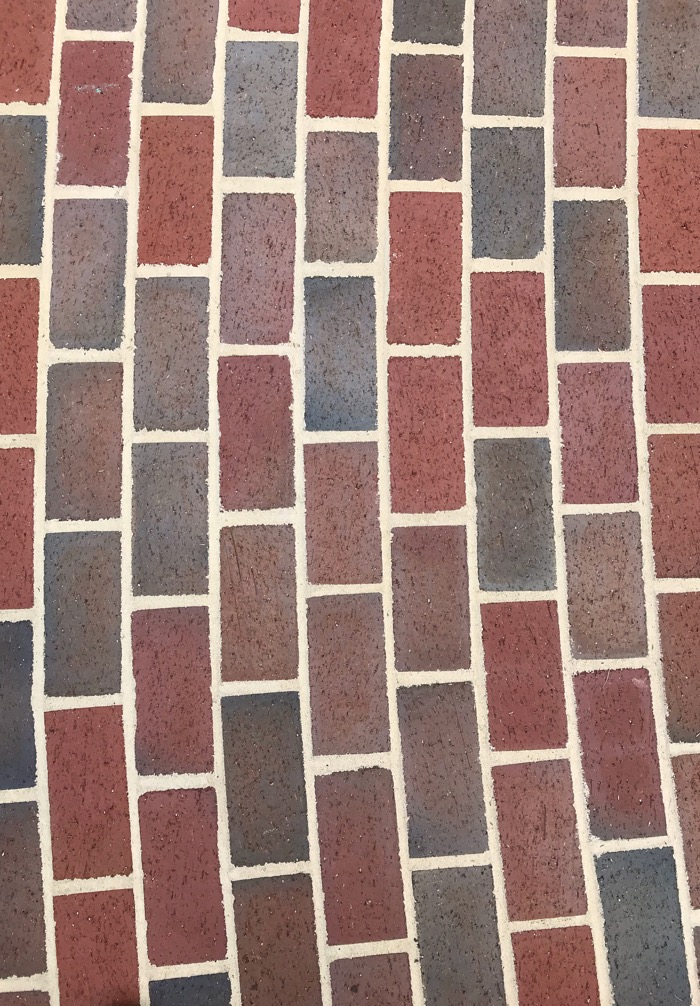 With a little care and minimal maintenance over the decades, the new paver walkway should last well into the next century. 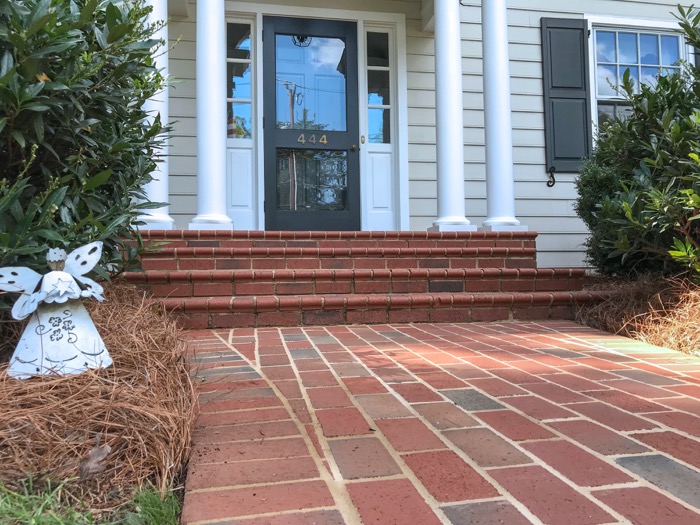 The new serpentine paver walkway matches up nicely with existing brick steps to the front porch. 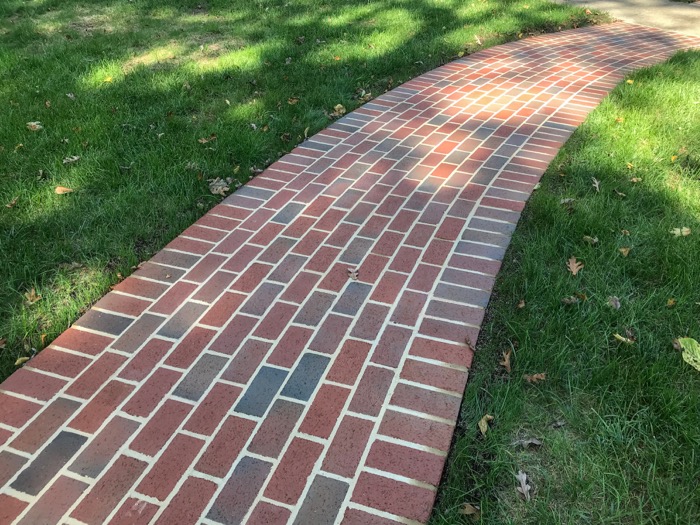 A fresh new brick pathway leads guests from the sidewalk to the front porch.