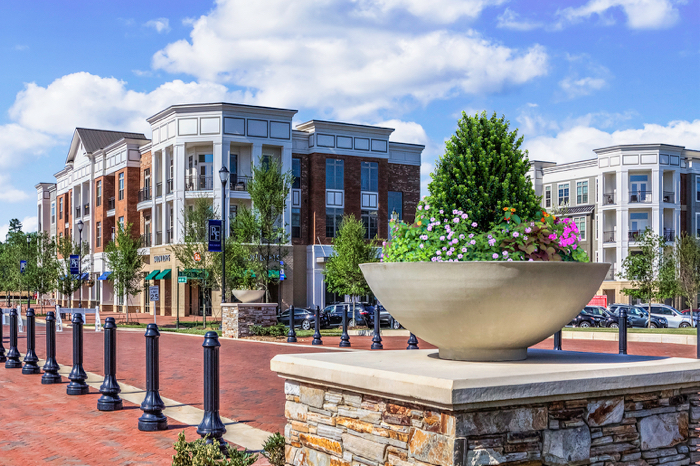 A paver streetscape using Pine Hall Brick Full Range is central to a new and growing mixed use community near Charlotte, NC.

Rea Farms is New Urbanism with a twist. It’s a community with acres of open space, apartments, single family homes, a K-8 magnet school set to open next year and a retail district with diagonal parking and clay paver sidewalks.

It carries New Urbanism’s promise of providing everything people need to live, work and play within easy walking distance.

The twist is that it’s been developed over the past couple of years instead of since the century before last, because with Rea Farms, there was no retrofitting required.

That’s because Rea Farms has always been open land, first farmed by generations of the Rea family beginning in the 1700s. It was developed in the 1990s into the 190-acre Charlotte Golf Links on Providence Road, about a half-hour’s drive from uptown Charlotte. 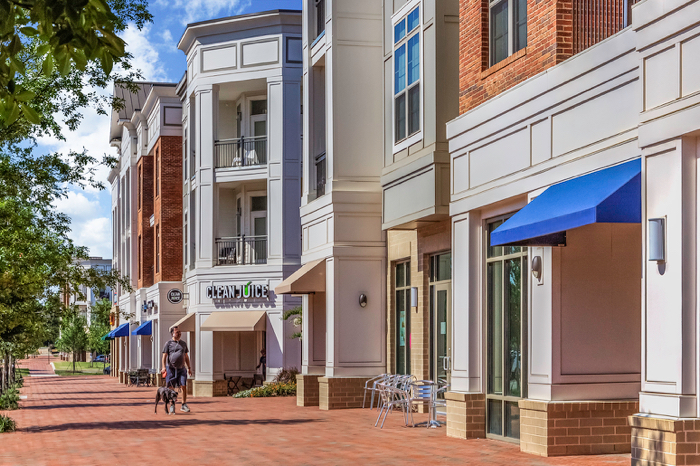 Johnny Harris, the CEO of Charlotte development firm Lincoln Harris, which is developing Rea Farms, told the Charlotte Observer that suburban areas like Providence Road are ripe for mixed-use developments with houses, apartments, office buildings and retailers within defined communities, instead of single-family subdivisions.

“I’m not sure any of us working on it really understood the strength of the market,” Harris told the newspaper. “The young people really want to be able to live, work and play in the same place.”

Real estate observers say that demand is also driven by the desire by many for authenticity within their surroundings. Ordinarily, New Urbanist projects take a downtown in crisis and make it new again.

The narrative usually runs in phases: Retailers move out to malls on the outskirts, the manufacturing plants shut down as business moves offshore, downtown residents begin to favor cul-de-sacs and commutes into the city instead of walk-up apartments.

Paver streetscape ties it all together 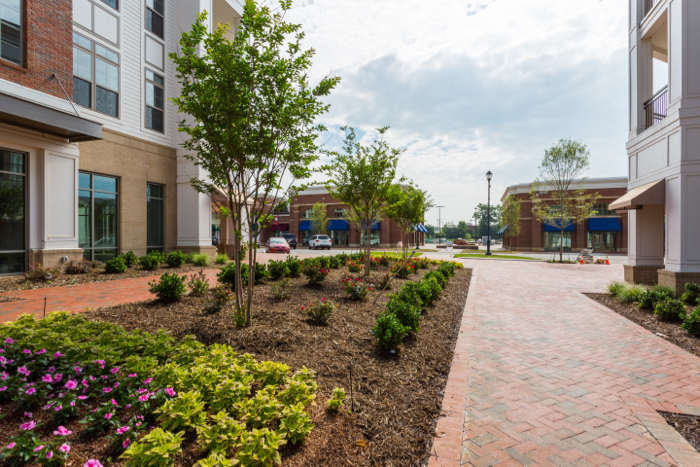 Sometimes, municipalities see the possibilities and enter into a public-private partnership with developers. The paver streetscape is refitted with pedestrian-friendly clay paver sidewalks and plazas, retail storefronts and restaurants are recruited on ground floors and dramatic loft-style apartments are put in up above.

We’ve written about a few examples of these kinds of New Urbanism, including Durham, North Carolina, with its American Tobacco Historic District, Cleveland, Ohio, with Flats East Bank  and Hartford, Connecticut, with Pratt Street. In each, the developers built it and the people came back.

Shaun Tooley, a principal in LandDesign, a Charlotte-based landscape architecture firm, said that starting from a blank canvas that open, undeveloped land provides has the same idea, to get people to gather, to attract people both inside the development and those nearby.

“The idea was to create a master mixed-use redevelopment site, to work with the development team to plan out and lay out infrastructure that would serve not only the planned project but the surrounding community,” said Tooley. “We have a signature open-space presence, a retail hub, nodes of activity and programming that are unique.’” 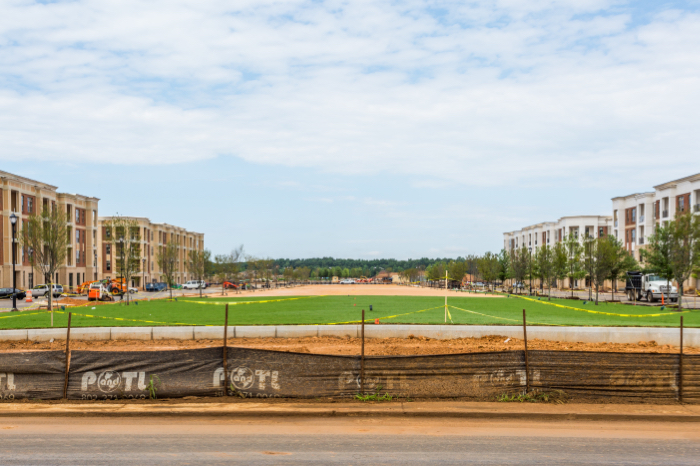 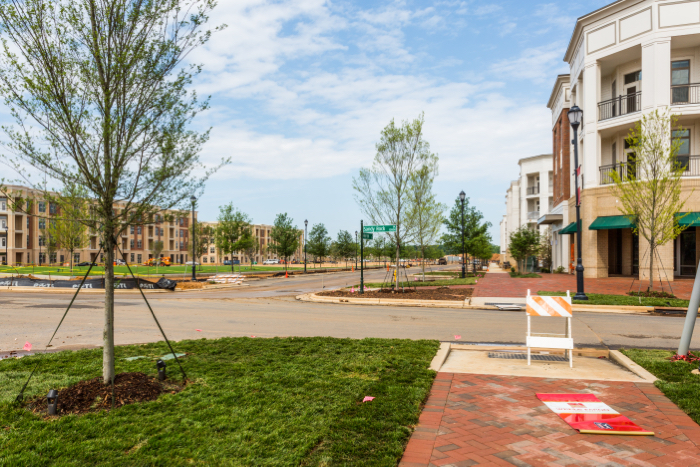 Tooley said that Lincoln Harris’ idea of creating a mixed use environment where people can experience the New Urbanism ideals of living, walking to work and to a shop or a restaurant is important in that it purposefully gives people a third place to be. It’s a place where they go when they’re not at home or not at work, where they can engage in the community and build memories.

The Charlotte Business Journal reports that at full buildout, Rea Farms will include retail and office space, a fitness center, apartments, single family housing, a hotel, senior housing and a K-8 magnet school, scheduled to open in 2020.

Tooley said that within Rea Farms proper, a main lawn of three acres is in place, with two more acres planned once an office component, proposed at 500,000 square-foot among several buildings, is built.

The lawn is headed by a plaza that will regularly host outdoor events when the weather is warm. Elsewhere, eight buildings for retail have been constructed, with most of the space already occupied, including a Harris-Teeter supermarket, several restaurants and a fitness center. Apartments and single-family housing is either underway or completed.

Out in front of the retailers, there is diagonal parking with sidewalks paved in Pine Hall Brick Company’s Pathway Full Range pavers, with additional pavers in crosswalks.

“The architecture at Rea Farms is very traditional – featuring brick as a signature design element,” said Tooley. “A lot of traditional expressions of design is to have that continuity with pedestrian space. The idea was to bring the pavers along the streetscapes to engage and interact with the architecture. That was a vital decision early on in the process.”

The clay pavers brought a character and scale that was important to the design team. 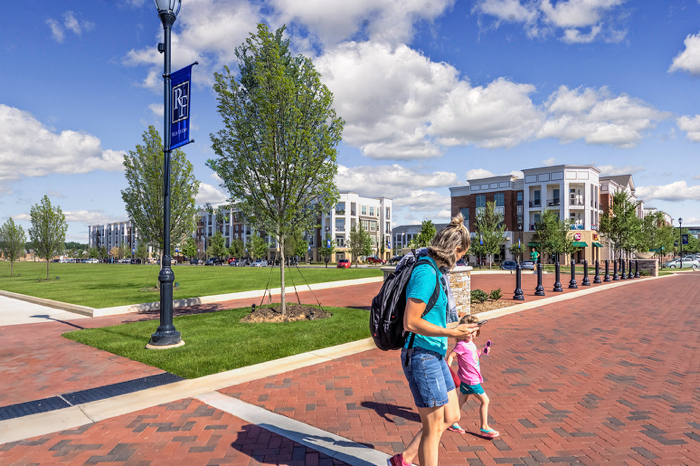 “The streets and the sidewalks, the color, the way it wears and the way it models the streetscape experience and narrative as being a traditional kind of walkable main street, both in terms of the aesthetics and the durability,” said Tooley. “It’s authentic – in this case, a nostalgic idea or thought or theme behind the main street and the town green and the plaza ahead of it that is surrounded by shops and eating establishments.” 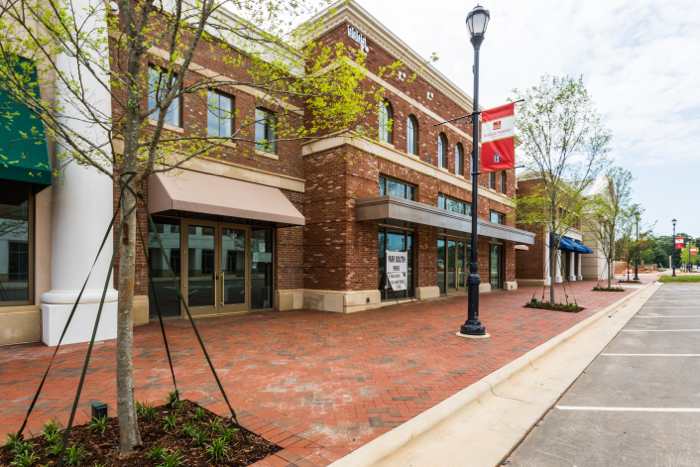