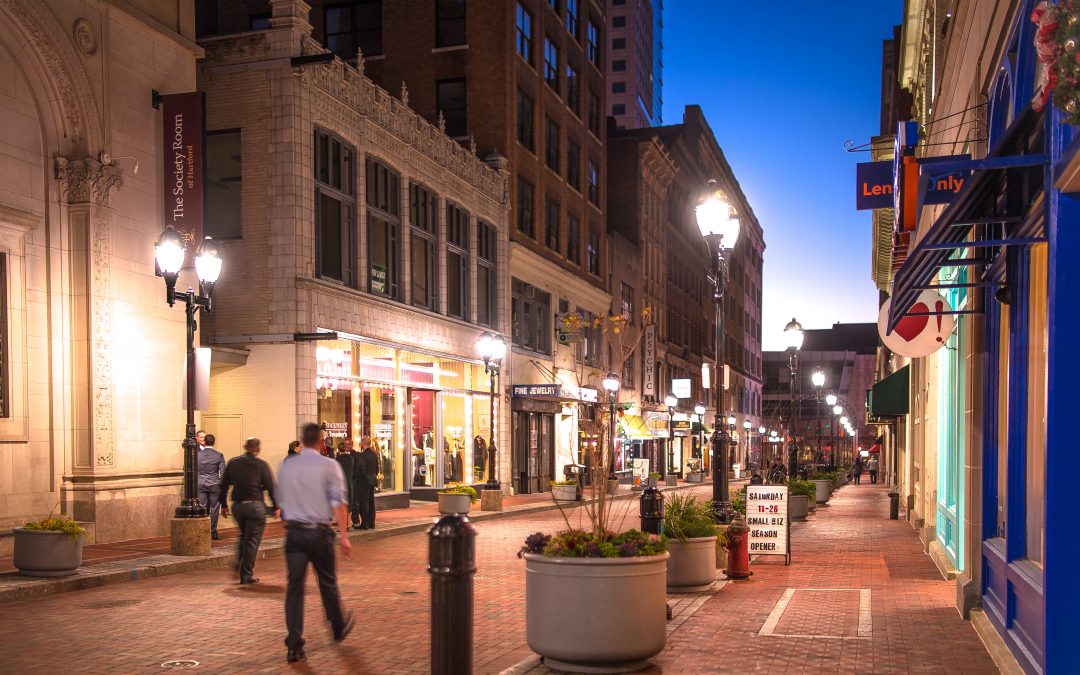 What if you owned a downtown restaurant and you wanted to offer outdoor dining at lunch? You could put some tables and chairs out front, on the sidewalk. Same thing if you owned a clothing store – you could have a sidewalk sale, to offer your merchandise to business people who have an hour to get away from the office in the middle of a summer day. Now what if your sidewalk got a paver makeover and extended from the curb clear across the street, 22 feet away?

In Hartford, Connecticut, it does.

Paver makeover in progress. Photo courtesy of TO Designs, LLC

Each day between 11 a.m. and 1 p.m., city officials block off the newly revitalized Pratt Street to traffic and each day, it becomes an open-air marketplace.

The move amounts to a compromise, says longtime Hartford landscape architect W. Phillips Barlow, PLA, AICP, LEED AP, who is principal of TO Design LLC which designed the space. 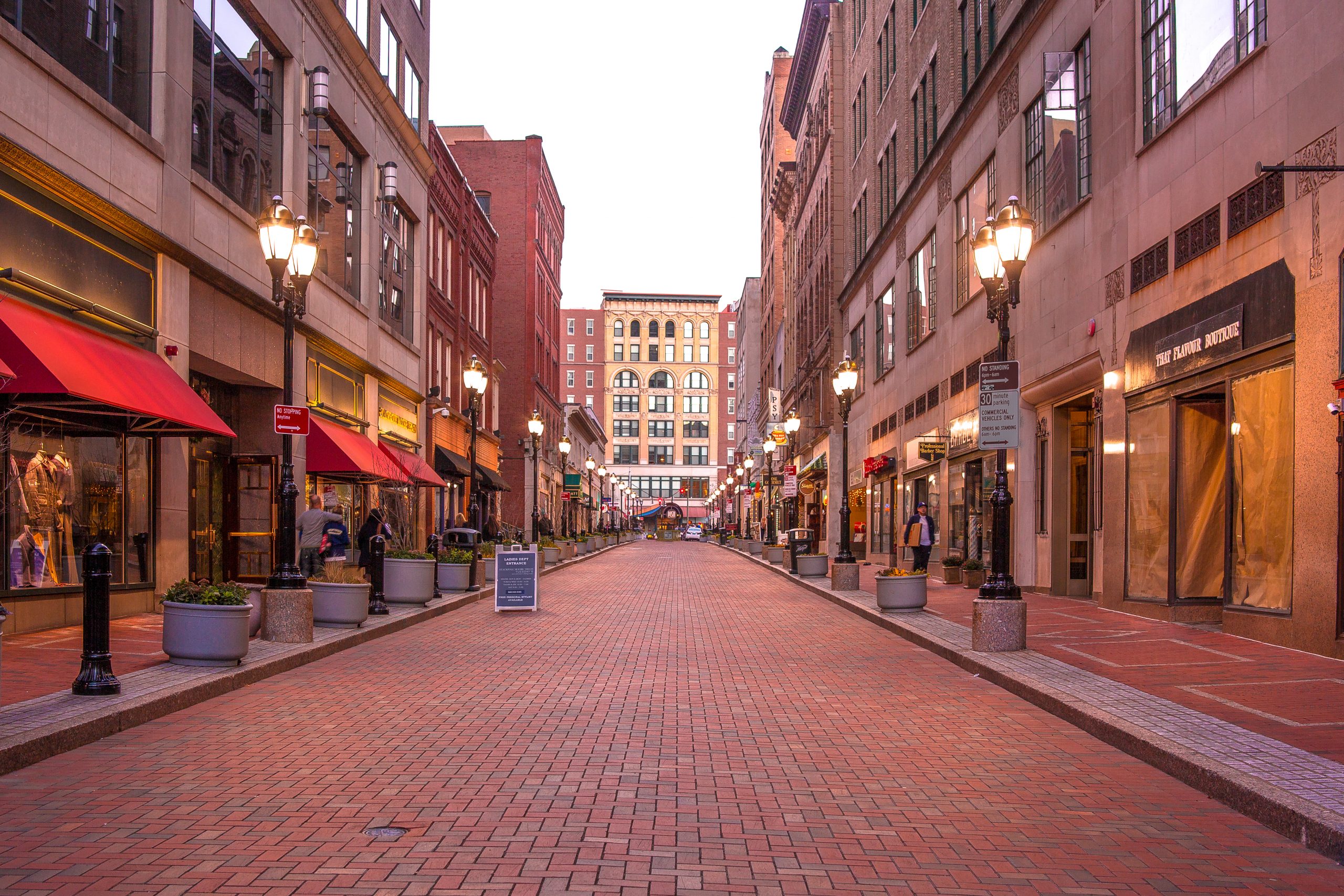 Photos courtesy of TO Design, LLC

Originally, the hope was that Pratt Street would be a pedestrian mall at least part of the time, but that proved problematic because of vehicles that had to make deliveries to commercial buildings. Eventually, advocates for the two uses eventually came together to shut down Pratt Street each day for a couple of hours.

Pratt Street, wrote Barlow, ”incorporates  many of the defining principals of New Urbanism, including walkability, connectivity, mixed uses and quality architecture. It also fits snugly into the definition of a ‘Complete Street,’ one of the latest movements in urban planning. It’s no wonder that Pratt Street endures.”—W. Phillips Barlow in TO Design blog

Pratt Street had its beginnings in the early 1800s, when the descendants of John Pratt, whose farmland included the area where the street now is, deeded the land to the city, according to Barlow. Pratt was well-known, serving as a representative at the first General Court of the colony in 1639.

Over the years, the street went from a fashionable residential area to an upscale commercial district. 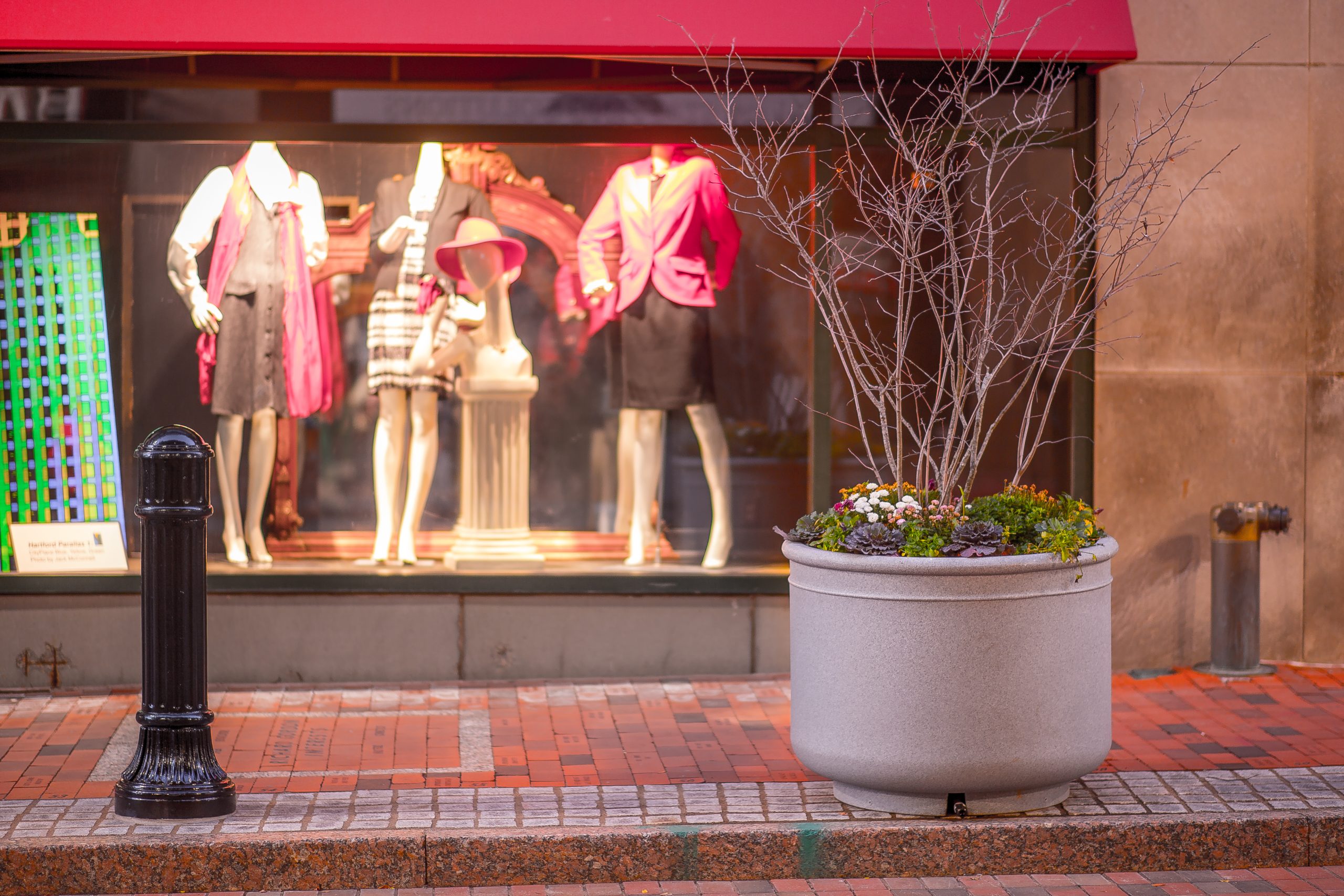 Photo courtesy of TO Designs, LLC

By the middle 1980s, an upgrade intended to bring a contemporary design to Pratt Street saw the installation of custom-made granite pavers, but since that time,  both the design and the pavers aged badly. The look of the renovation didn’t fit well with the historic neighborhood and the pavers weren’t up to the task of withstanding the freeze and thaw cycles of brutal winters, the weight of the vehicles and the corrosive aspects of the road salt.

The solution was to find something that from an aesthetic perspective would fit in well with the historic nature of the surrounding neighborhood, while at the same time, being durable enough to stand up to vehicular traffic and easy to maintain. 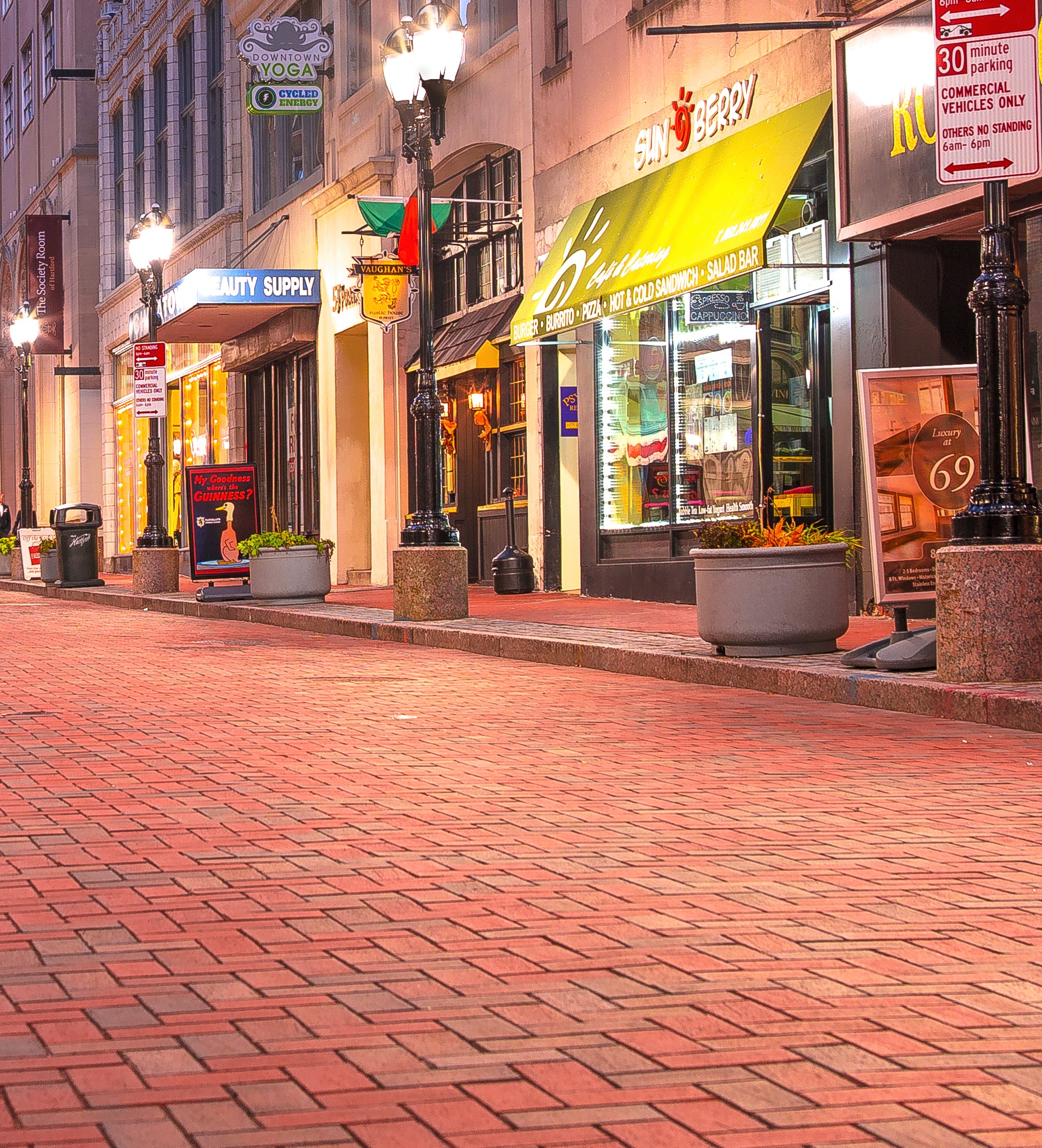 Photo courtesy of TO Designs, LLC

The answer was Pine Hall Brick Company’s English Edge Full Range Heavy Duty pavers, laid in a herringbone pattern, which is better for traffic uses. From an aesthetics perspective, the pavers are the same color all the way through. In terms of durability, the pavers have a tested compressive strength of between 12,000 and 15,000 pounds per square inch, far beyond what’s required for use in streets.

Barlow says that the project – which saw 13,476 square feet of pavers installed down 300 feet of Pratt Street  –  took place between April and August of 2016.

Like all jobs, it had some surprises. The granite pavers were not as thick as the original plans indicated, which meant that when the Pine Hall Brick pavers – with their consistent size and thickness  – were installed, they didn’t fit the same way as the old ones did. It means that Pratt Street has a curb that is shorter by an inch. And it means,  Barlow says, that there was some ‘hand-wringing’ about it at the time. 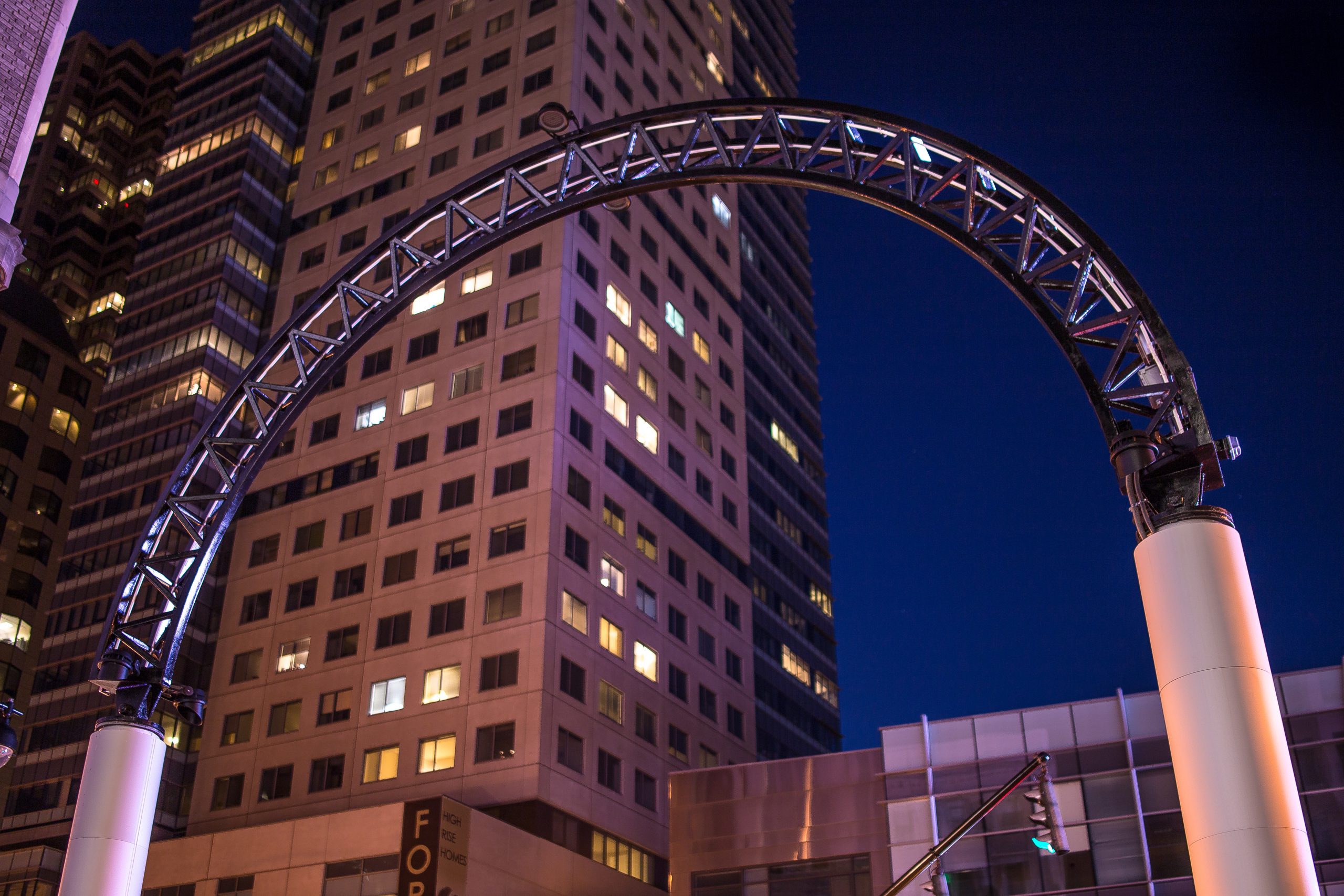 Photo courtesy of TO Designs, LLC.

None of that mattered when Pratt Street was opened. Barlow said that the street was embraced by the community as a space to be shared by all. And that, he said in a blog post about Pratt Street, means that Hartford has achieved what many cities hope to accomplish: a pedestrian-scaled commercial street.