Jason Reader sold himself on Casa Grande with white mortar

“We use lots of materials, but if the neighborhood and the price point line up, I’m absolutely going to choose brick,” says Reader.

His most recent completed project is a 5700-square-foot brick beauty for some very special homeowners: the Reader family.

The modified Tudor style home wraps around Reader’s lifestyle with an office specially built for J Reader Construction that’s linked to the main home by a nifty portico walkway over the driveway that leads back to a separate two-car, one-golf-cart, garage.

Not only does this arrangement eliminate any commuting to work, it makes getting to the golf course a short cart ride to the Bermuda Run Country Club that backs up to the property.

It’s built with Pine Hall Brick Casa Grande. The dark brown brick with just a hint of red is balanced beautifully with white mortar. As a builder, Reader had specified a lot of the popular Casa Grande line, but when he saw it with white mortar, he knew that was what his personal home had to have.

Reader managed to have his new home ready to show this weekend and next in the Winston-Salem (NC) Fall Parade of Homes. It’s the 10th home he’s built for himself. 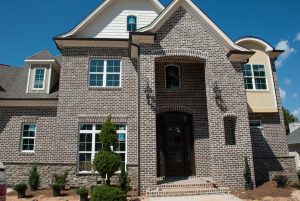 “And it’s the last one I want to build,” says Reader, “at least until our daughter is out of college!”

So quality was upmost in Reader’s work.

“I like to borrow from other designs I see and from other homes I build custom or on spec,” says Reader. “I mix and match rooms and exterior features working with my draftsman to get exactly what I want. The spec home I’m building next door comes from about eight different plans.”

The Reader home features a lot of stylish exterior elements that accent the expansive face brick, like cedar corbels, stained exterior ceilings and a stately second floor bay under a curved gable for his daughter’s playroom. Reader also combined Hardie Plank and stone with the brick façade for nicely balanced curb appeal.

Reader began as a floor sweeping apprentice, working his way up to eventually become a contractor — learning from his mentors along the way.

“I’m still best friends with the first contractor who hired me,” says Reader.

J Reader Construction sets itself apart by being consistently present at its job sites to monitor progress and assure quality.

Jason Reader attributes a lot of his home’s quality to choosing the best materials, like Casa Grande with white mortar from Pine Hall Brick.