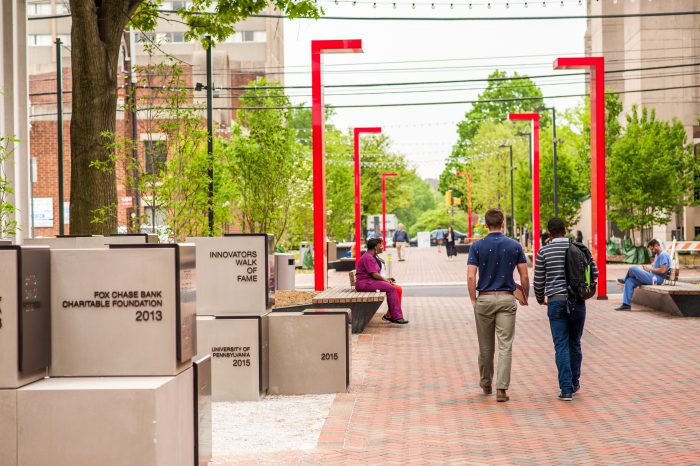 Along 37th Street in Philadelphia, there are single concrete blocks rising from the ground that celebrate the achievements of individuals within the fields of science, technology, engineering and art, all of whom have ties to Pennsylvania.

The ground that they are rising from – a two-block long pedestrian plaza called the Innovators Walk of Fame – is itself innovative, because it’s made up of Pine Hall Brick Company’s StormPave®  permeable pavers.

The walk and the plaza that surrounds it is the brainchild of the University City Science Center, which is the oldest urban research park in the United States.  The designers of the Innovators Walk of Fame specified permeable pavers both because the Philadelphia Water Department requires projects of this size to treat stormwater on site and it specifically wanted a sustainability element to be included within the design.

In the case of the plaza itself, necessity was the mother of invention and cooperation was its fuel. Jeanne Mell, vice president of marketing communications for the University City Science Center, said that for two years, organizers discussed possible locations for the Innovators Walk of Fame. 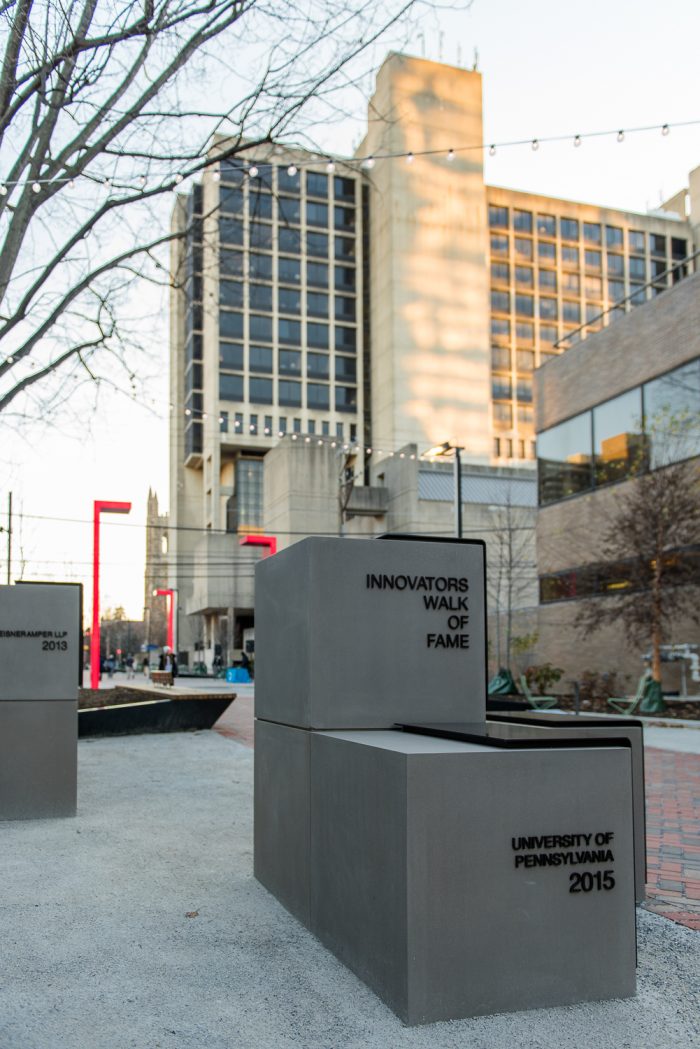 What was then a drab pedestrian walkway on 37th Street between Market and Chestnut streets rose to the top of the list. The Center reached out to the property owners, which included the  International House Philadelphia, the National Board of Medical Examiners, the 3624 Condominium Association, PECO and  the University Lutheran Church , and all got on board. The Center and the property owners worked with design firms Andropogon and Exit to come up with plans.

The design principle behind Innovation Plaza is the golden ratio, the underlying proportion found in the design of all nature and life that has inspired architects and designers for millennia. Given that the Innovation Plaza celebrates the best of the best in design, engineering and mathematics, it is appropriate that the ratio used by mathematicians, engineers and artists as a foundational design structure be used in the project. The proportion is infinitely scalable and is reflected in the two- and three-dimensional elements, such as the dramatic red portals.

“The implementation of the golden ratio into the design of Innovation Plaza pays homage to the technical and scientific roots of the Sccience Center while giving the space a unique, vibrant and meaningful design,” said Mell.

The main challenge to the construction, which took place over six months in the fall of 2015 and saw the installation of almost 25,000 square feet of pavers, was the presence of underground electrical transmission conductors and a water and sewer system that was more than 100 years old.

Still, the outcome made it worthwhile. 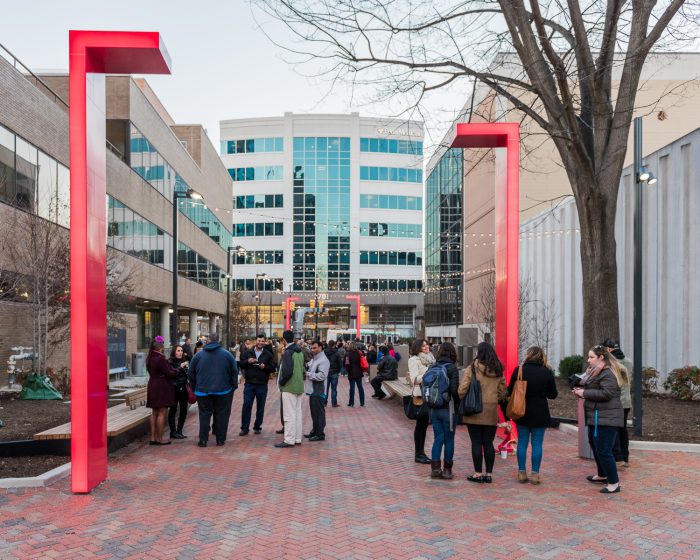 “It has become an active place for people who work and live within and around uCity Square to relax, socialize, work and play,” said Mell. “With vibrant plantings, chess, checkers and backgammon tables, free wi-fi and spots to just stop, sit and ponder, Innovation Plaza inspires ideas and reflects the dynamic energy of the Science Center, uCity Square and our partners and stakeholders. “

The Innovation Plaza is aptly named – and it’s entirely appropriate that the University City Science Center would champion such a cause. Founded 55 years ago, the Center is a mission-driven nonprofit organization that connects innovation to entrepreneurship and technology commercialization.  It has supported startups, research and economic development in the life sciences, healthcare, physical sciences and emerging technology sectors.

As a result, graduate firms and current residents of the Science Center’s incubator support one out of every 100 jobs in the Greater Philadelphia region and drive $13 billion in economic activity in the region annually.

Visitors to the Innovators Walk of Fame learn about such innovators as John W. Mauchly and J. Presber Eckert Jr. who invented the ENIAC, the first general purpose computer; or Frank Piasecki, who developed the twin-rotor ‘flying banana’ helicopter; or Rebecca Cole, the second African-American woman to receive a medical degree in the United States; or Stephanie Kwolek, who invented the technology behind Kevlar.
In all,  more than 20 innovators are named in the Innovators Walk of Fame, virtually all of whom are virtually unknown. 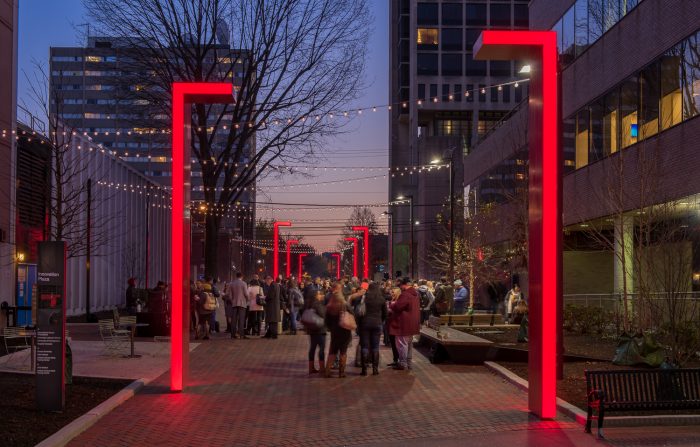