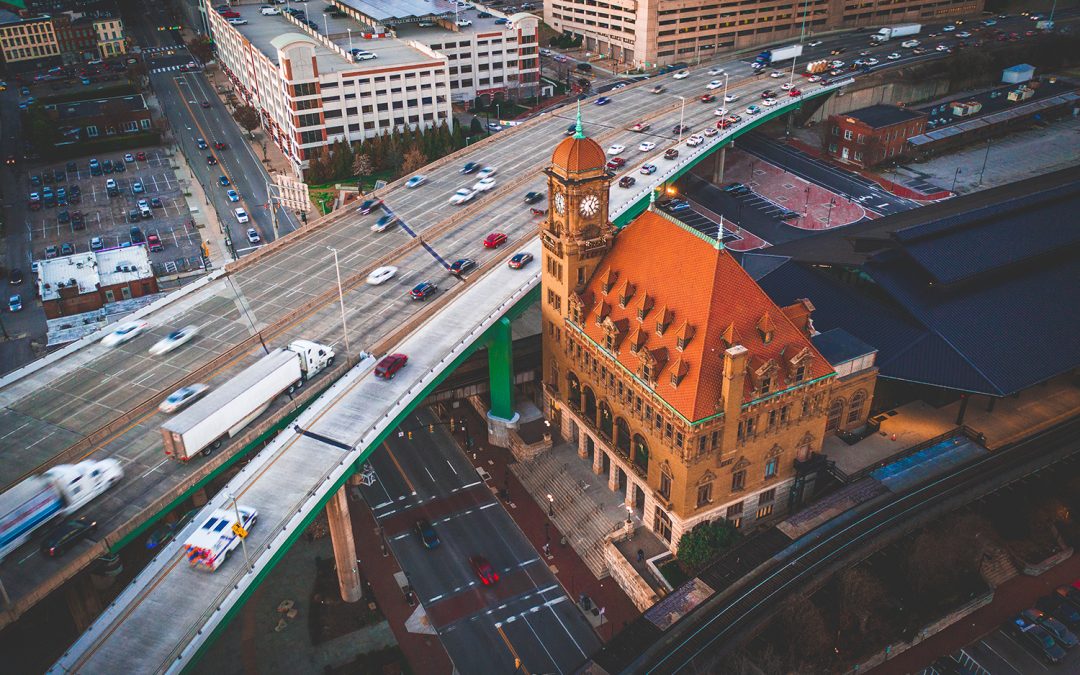 In Richmond, Virginia, a historic hardscape at the 17th Street Market is an important part of a revival, which has come about as the result of a recently completed renovation. Part of the work involved continuing a long-established design theme of using specified Pine Hall Brick clay pavers in two varieties: Full Range Wire Cut Modular and Pathway Full Range, to tie together the Shockoe Bottom neighborhood.

If something is for sale in a farmer’s market, chances are that it’s been sold at some point at 17th Street Market in Richmond, Virginia.

That’s how it works when the market is more than 275 years old.

Now owned by the City of Richmond and managed as a public venue by the Department of Parks, Recreation and Community Facilities, the Market hosts festivals, music  concerts, art, vendors, educational programming and a weekly farmer’s market. “I wouldn’t let them use asphalt. I made them use brick.”
–Jeannie Welliver, architect

Tim Hamnett, a project manager with the architectural design firm Baskervill, said that the clay Pine Hall Brick pavers are playing an important role in the 17th Street Market Project. The project replicated the historic context of the site while raising the street surfaces of 17th Streets North and South to match the sidewalk level. This created a pedestrian, outdoor-dining, and event-friendly storefront-to-storefront level plaza.

Jeannie Welliver, an architect with the City of Richmond who oversaw the renovation, said that the 17th Street Market said that the intent was to create a smooth sloped plane to ease the way for those who use wheelchairs and parents with strollers. 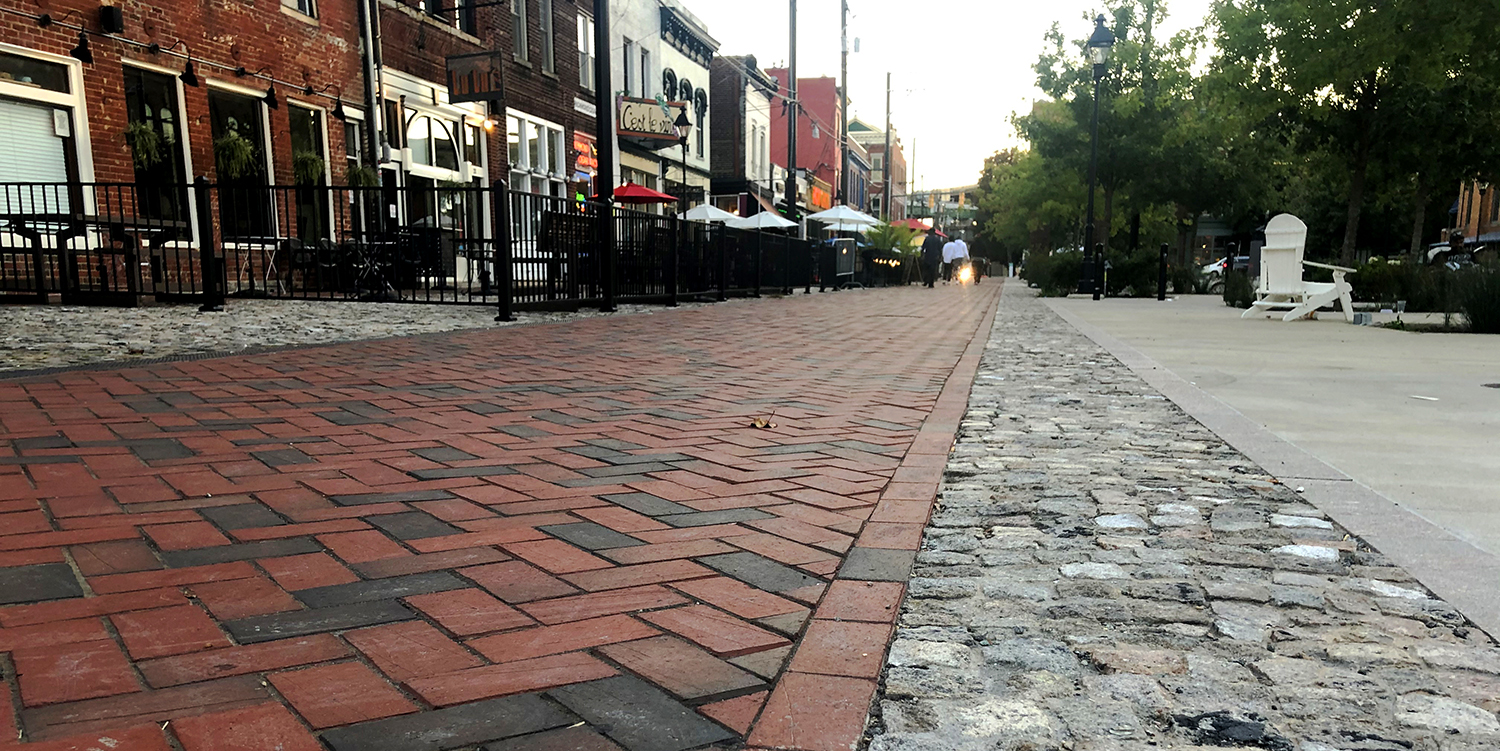 Down on the street level, a herringbone paver pattern creates a dark red promenade around the market, lined with shops, bars and restaurants. Photo: Giselle Mantura.

The clay pavers were used to delineate both the sidewalks projecting from the storefronts out into what used to be the street and the Virginia Capital Trail, which connects Jamestown to Richmond. Pavers provided a smoother surface in the historic hardscape for cyclists to slowly pass through the Market on their final approach to the Virginia State Capitol.

The pavers are also used to point the way from the 17th Street Market to the adjacent Main Street Station, a state-of-the-art multi-modal transportation hub.

“I wouldn’t let them use asphalt,” said Welliver. “I made them use brick.”

Welliver said that the design of the 17th Street Market takes its inspiration from La Rambla, an outdoor pedestrian market in Barcelona, Spain, which features a tree-lined central promenade with kiosks that sell newspapers and souvenirs and small street cafes and shops. La Rambla is open from early in the morning until late at night and is often the site of festivals, markets and sports.

To get a tree-lined street, the builders of La Rambla planted trees in the 1700s and 1800s. But to get a tree-lined street today, especially in an urban setting like Richmond, landscapers are using the Silva Cell, a stormwater best management practice that assists in rapid tree growth, because large trees not only provide shade but also take in and shed more rain. 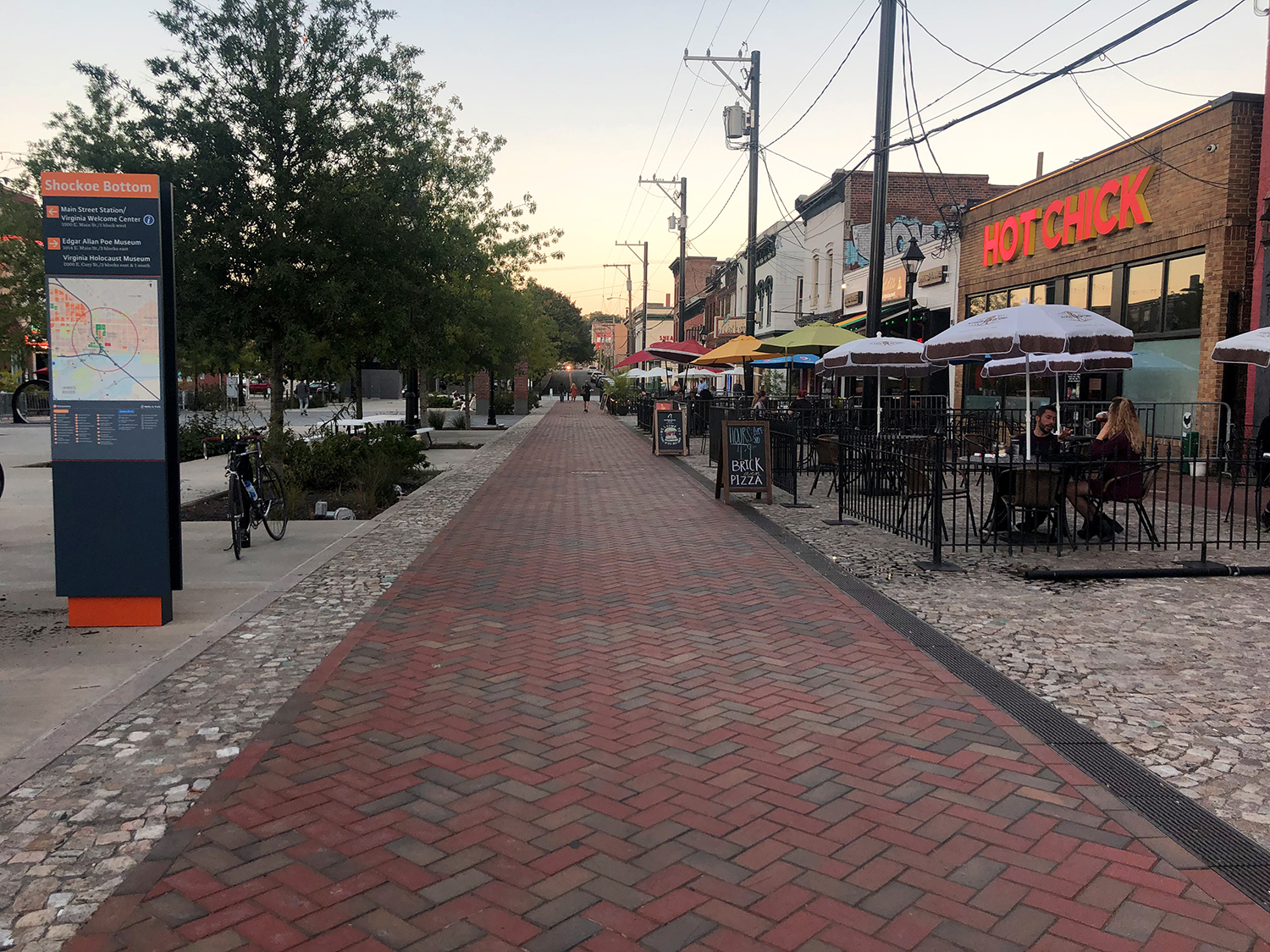 As the sun goes down, lights come on with clay pavers providing an attractive pedestrian street. Photos above and below: Giselle Mantura. 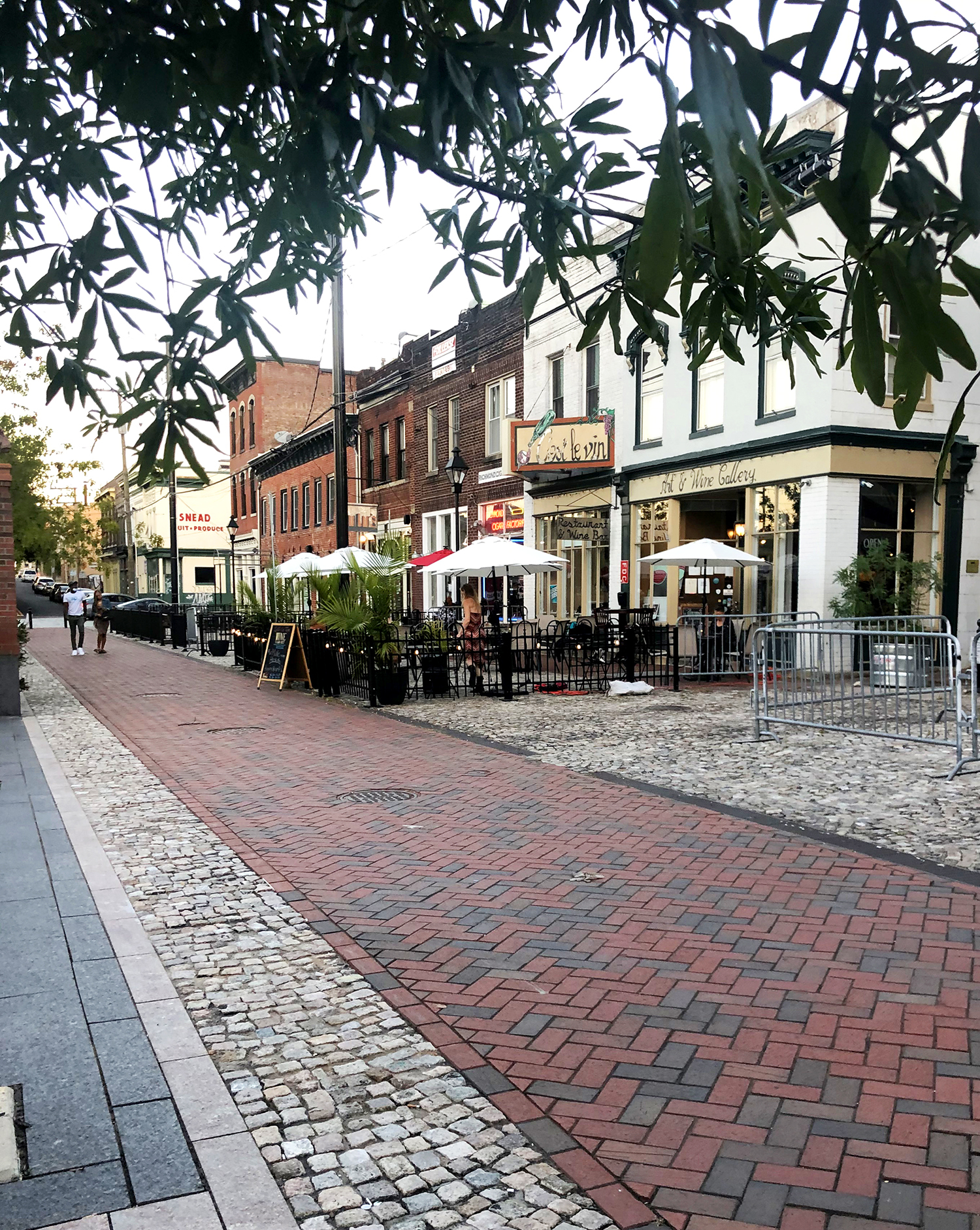 From then until now

According to Richmond’s city history, the 17th Street Market has been a public gathering space since 1737 for three main reasons:  its proximity to ships bringing in supplies on the James River; the fact that Main Street served as the main road between Richmond and Williamsburg; and nearby Shockoe Creek was used by small boats brining shellfish to awaiting customers.

The Farmers Market continued to prosper and undergo renovations until the mid-1900s, but the Shockoe Bottom area began to decline. The suburbs had new shopping centers, with large, more convenient grocery stores. Farmers came in from the fields and took jobs in the factories. The first Market House was torn down in 1961 and the market itself was scattered around to various vendor stalls.

The greatest advantage to the 17th Street Market in those days was also the greatest disadvantage. The river had a tendency to overflow its banks and flood the Shockoe bottom neighborhood. Development saw an uptick after completion of the James River flood wall and the Canal Walk in 1995. At about the same time, a major boom in residential construction was underway as old warehouses and other buildings have been converted into apartments.

Alongside the rest of the neighborhood, the 17th Street Farmers Market has begun its renaissance. More importantly, consumers, neighbors and farmers are rediscovering each other.

Hamnett said that market is a “significant part” of a series of public spaces that link a high-density neighborhood and the central business core, including the recently renovated Main Street Station. It’s located within a few steps of transportation systems including an Amtrak station, a bus rapid transit line, a Megabus depot and a city bike kiosk. 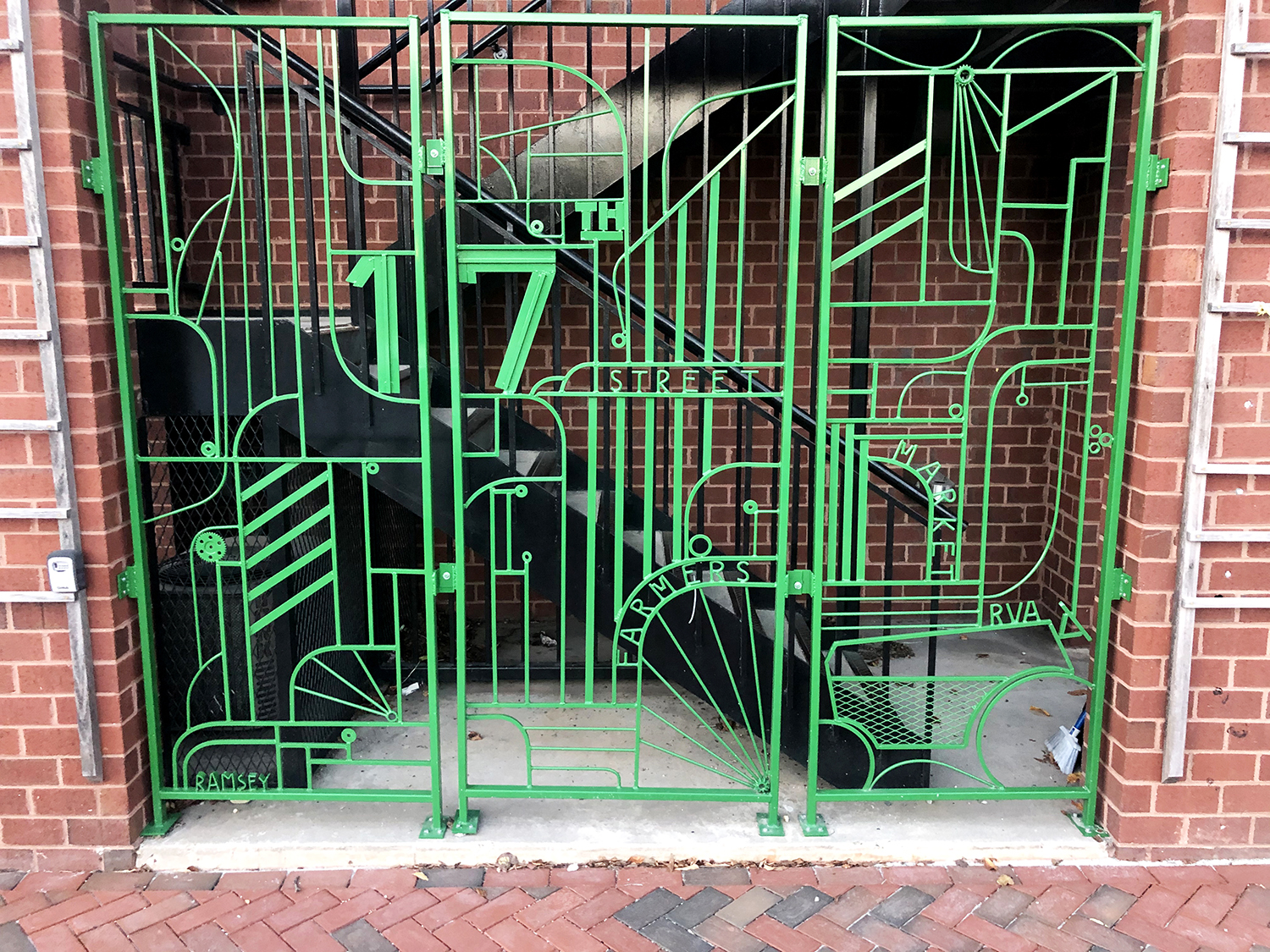 For Welliver, the 17th Street Market can be seen as an example of New Urbanism, an idea of an urban district where you live, work and play in a relatively small urban space; a place where quality of life matters more than a spread out cul de sac in a suburb.

But she will tell you that it’s more like Original Urbanism – Rediscovered.  Back in the day, the business was on the first floor, fronting onto the street, while the business owners lived upstairs in apartments. While those businesses gradually emptied out and tenants moved away as shoppers went elsewhere, they’ve returned.

“This really was the first district in our city,” said Welliver. “This is older Richmond and today, it’s a very strong apartment market.”

Similarly, Hamnett said that the 17th Street Market provides a community front porch in a neighborhood that was recently the fastest growing in the city.

“Before the project began, there were boarded-up businesses surrounding the plaza and the “market” was most often used as a parking area,” said Hamnett. “Since completion, three new restaurants and a coffee shop have opened on the market, their patrons spilling into city approved encroachments within the historic sidewalks and street areas.”

Welliver said the district is among the strongest in Richmond today, with event spaces for weddings, concerts and the like, food and craft vendors, and outdoor dining, all tied together with pedestrian walkways made of Pine Hall Brick pavers, which effectively sets the stage for another 275-year run.