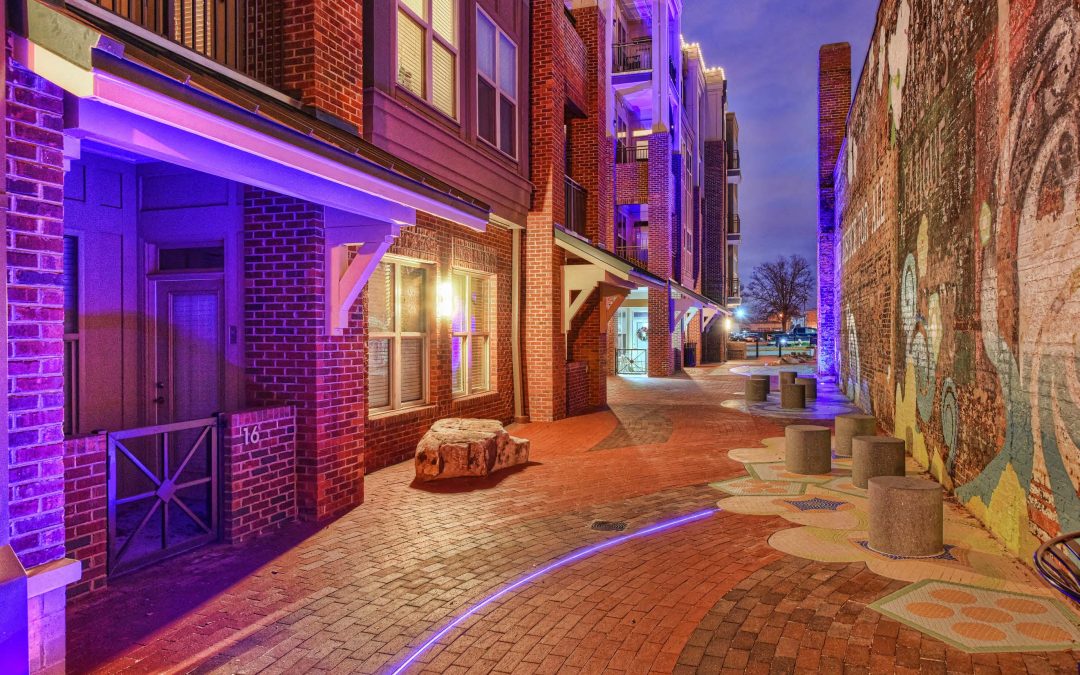 Do not follow where the path may lead. Go instead where there is no path and leave a trail.
-Ralph Waldo Emerson

If you were to visit downtown Rock Hill, South Carolina, you might find yourself in the Freedom Walkway, walking on bands of red and cocoa pavers from Pine Hall Brick Company, laid into a running bond pattern that turns into a basketweave pattern at gathering spots.

Above, a red brick wall is emblazoned with the words, “Liberty and Justice For All.”  That’s what you would see here. And everything that you see here is symbolic of what happened here. 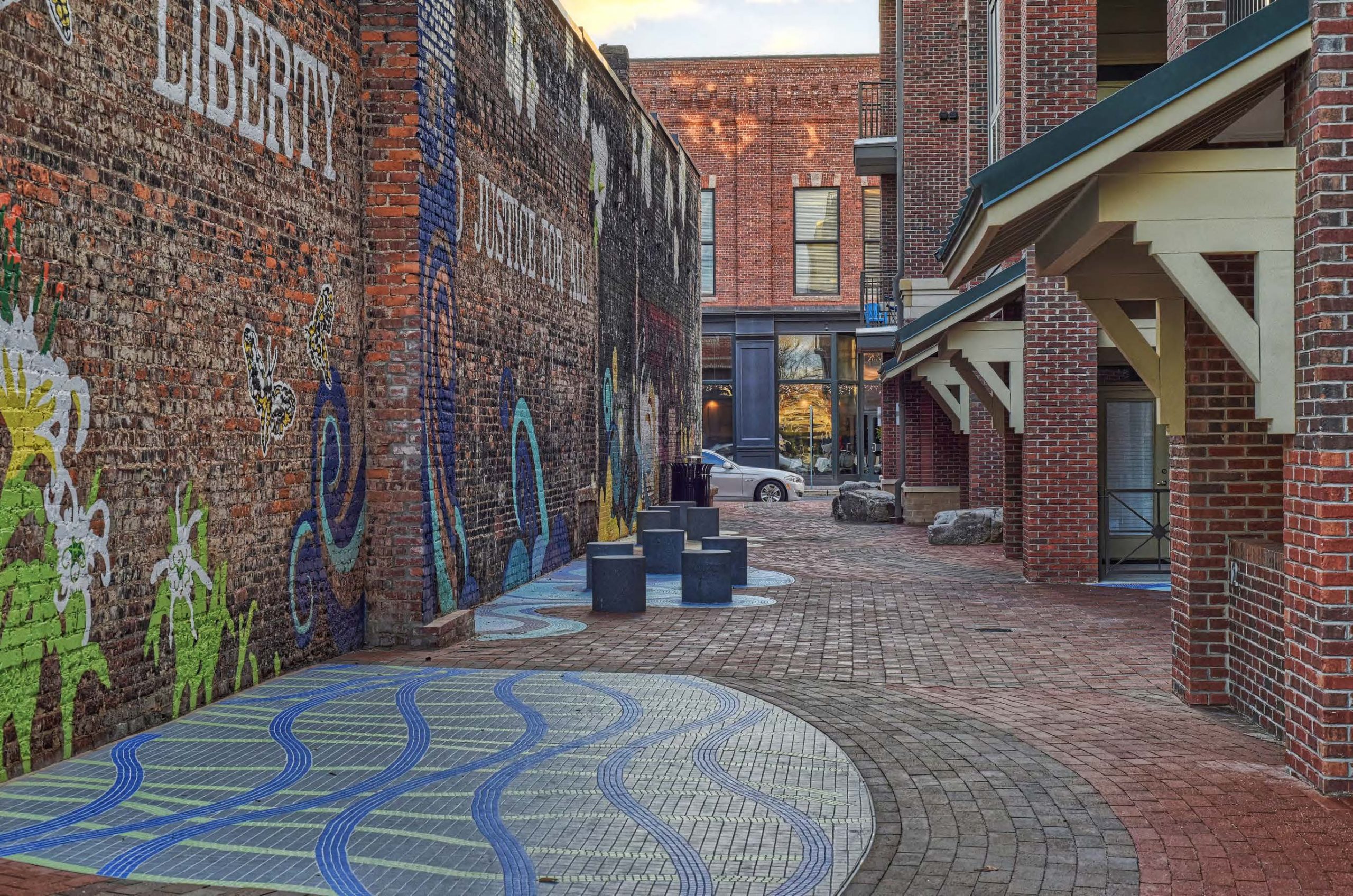 The Freedom Walkway takes its design from the Civil Rights Movement of the 1960, which commemorates the sit-in, an often-used method of civil disobedience. Black college students adopted the method of going to segregated lunch counters and ordering food. When they were refused, they would refuse to leave and end up under arrest.   Bolstered by a sit-in in February 1960 by four NC A&T State students at the Woolworth’s in downtown Greensboro, NC, the movement spread to 250 cities across the US by the end of that month and 400 by the end of the year. In January 1961, the Friendship Nine—so named because eight of the nine were students at Friendship Junior College—integrated a whites-only lunch counter at the McCrory’s department store in Rock Hill.

And they added a new wrinkle.   They opted to spend time in jail, rather than pay the fines of a system that they saw as unjust. Because the sit-ins were continuing to expand throughout the South, protesters who chose to serve time saved the money that civil rights groups would otherwise have to pay for court fines. The move gained national attention.

More than 50 years later, in 2015, Judge John C. Hayes III of Rock Hill overturned the convictions of the nine, saying “We cannot rewrite history but we can right history.”

A prosecutor apologized to the eight men who were still living, who were in court. 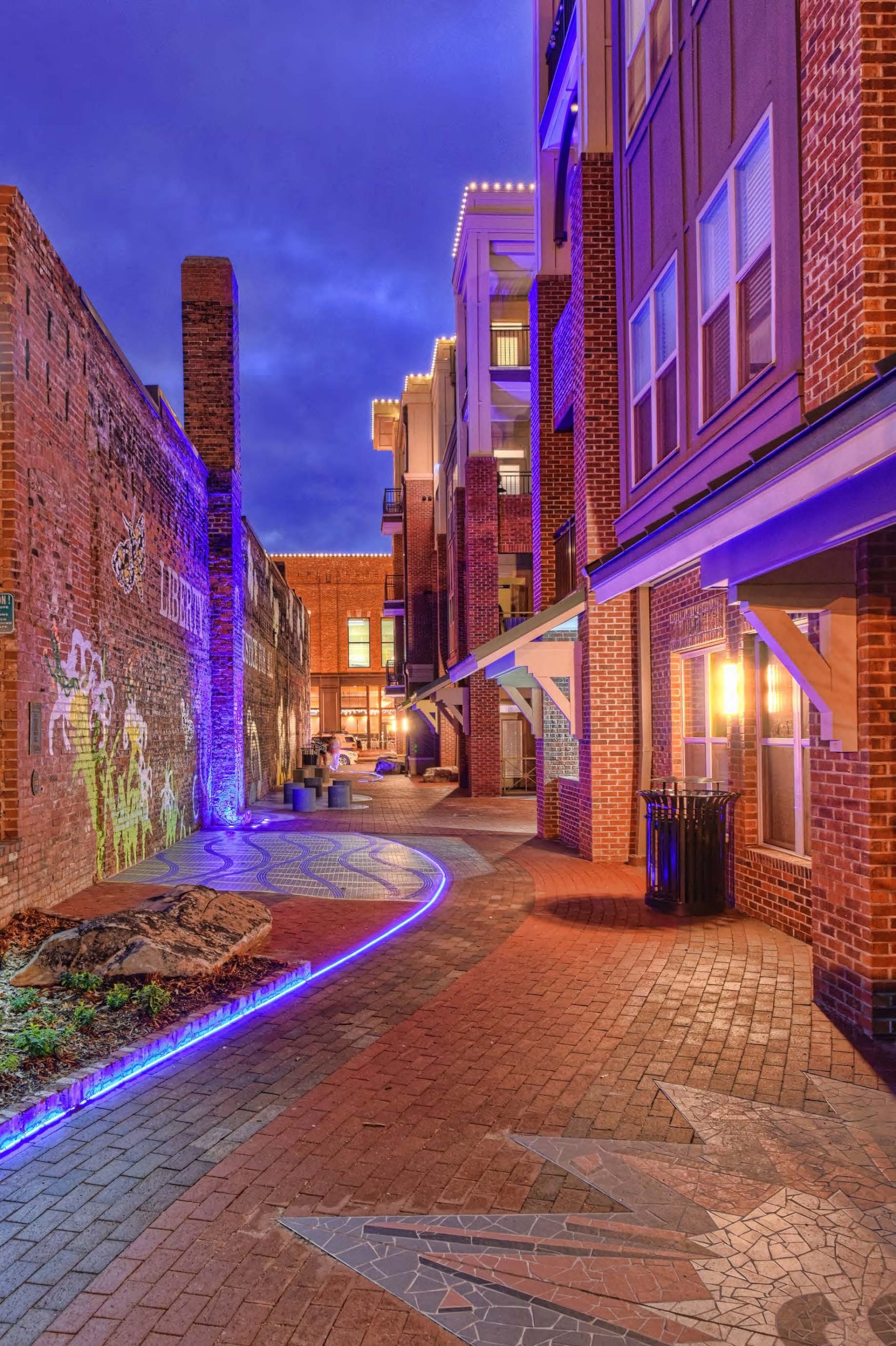 Opening a book – and a new chapter

Laurel Holtzapple, a registered landscape architect and principal of Groundworks Studio, used the 2015 court hearing – the reopening of the court docket book and the overturning of their trespassing convictions—as part of the design for Freedom Walkway. 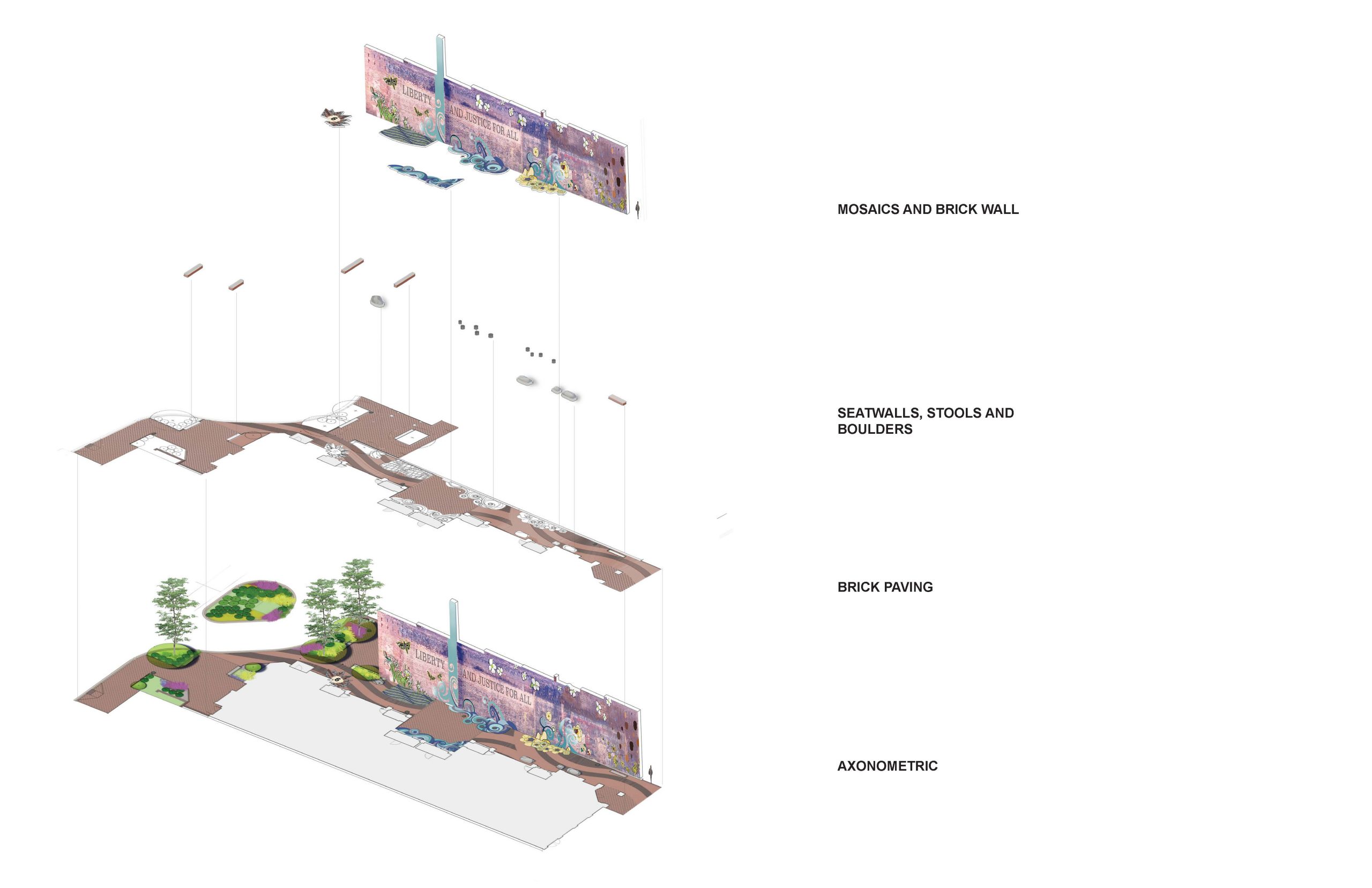 The project had its beginnings in a deteriorated former Woolworth’s building, not far from the McCrory’s where the Friendship 9 sit-in took place. The Woolworth’s was built in 1916, burned in 1934 and rebuilt in 1935. By 2014, damage to the roof had left it too dilapidated to restore. A proposal to demolish the building for a mix of retail and apartments, and a public walkway connecting a parking lot to the business district, was approved.

Once uncovered, an exterior brick wall covered with layers of paint from past advertisements provided a backdrop to the Freedom Walkway.

Some – like the word “Relieves Fatigue” – were kept as a symbolic reminder of the struggles of the Civil Rights Movement. The words “Liberty and Justice For All,” were added to the wall, from an old photograph of a protester’s sign. A chimney from the Woolworth’s building was painted dark blue, a color that has traditionally symbolized protection in the African-American community and is lighted at night, as a beacon of hope. 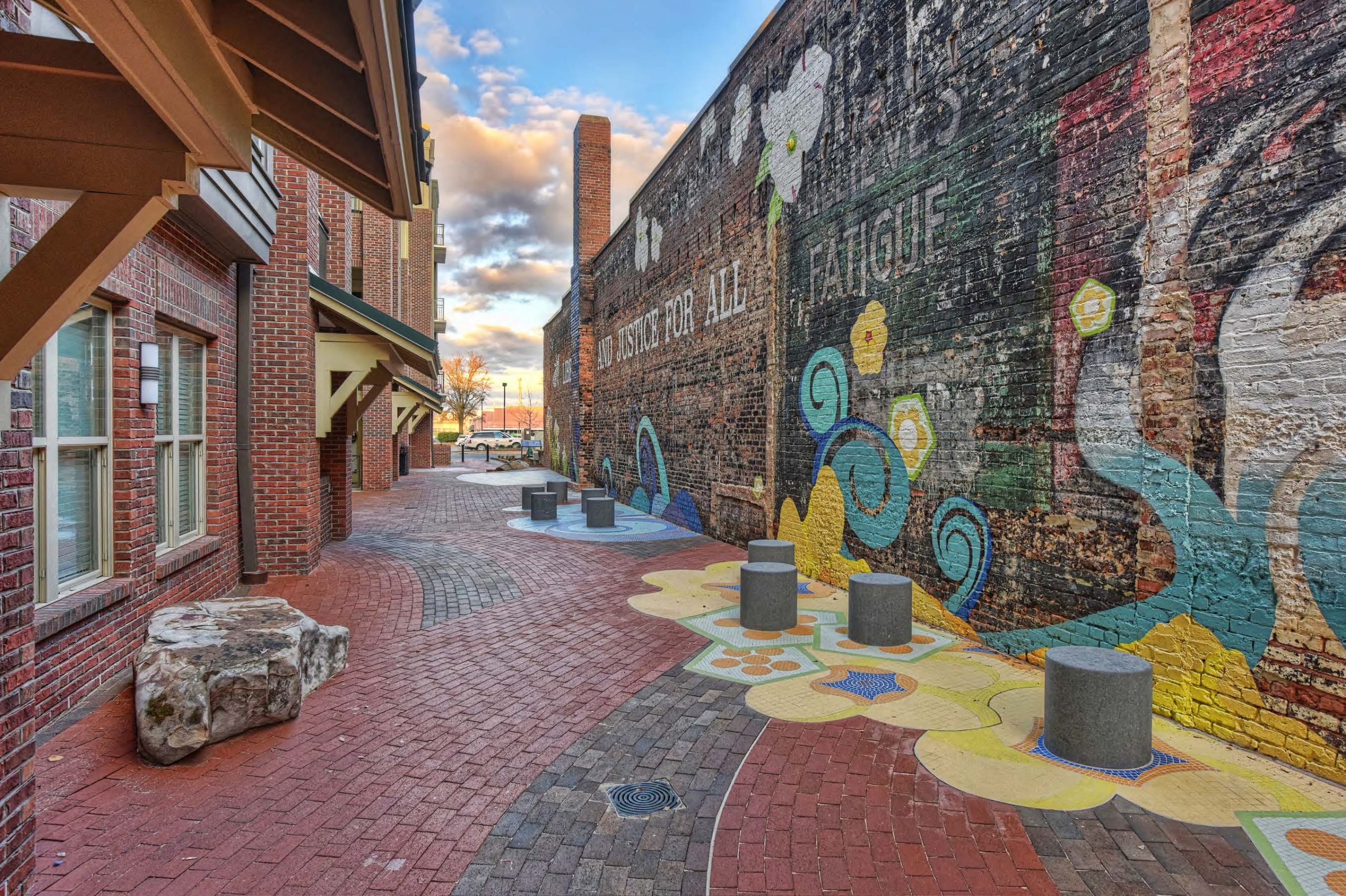 On the ground, curving patterns of clay pavers flow through the walkway, leading visitors on a journey. The nine cylinders of gray granite represent the stools that the Friendship 9 sat on; swirling blue spiral mosaic patterns within the field of pavers represent the turbulence of the era; the boulders within the walkway represent obstacles in the path of those seeking freedom and justice. 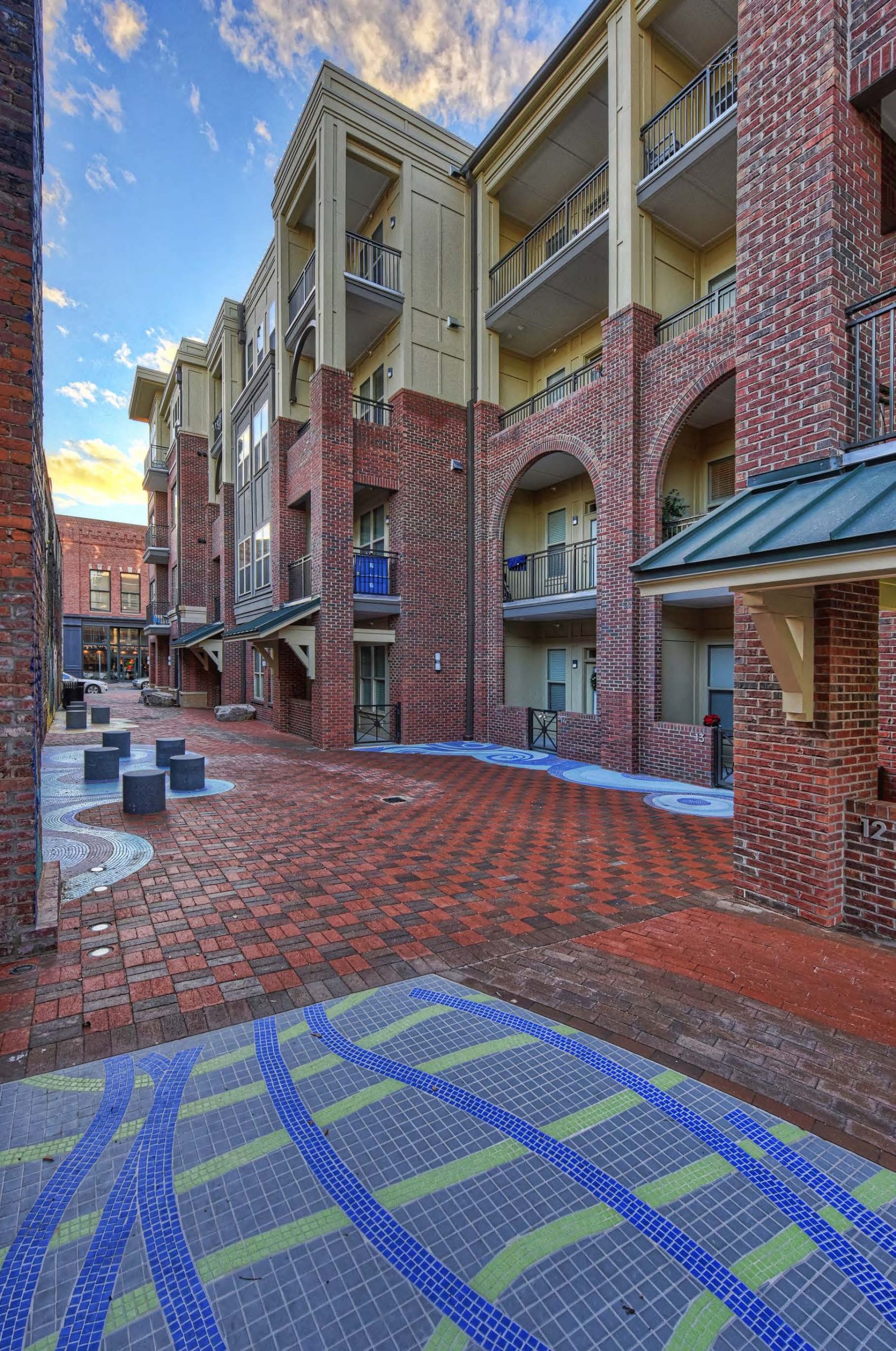 Even the patterns of the pavers themselves are symbolic: the running bond directs forward movement and directs visitors through the area, the basketweave is symbolic of the patterns of the baskets that the nearby Catawba Indians make.   In all, the Freedom Walkway is a work in progress, much as the Civil Rights Movement was and is. Those involved in the project say that it shows where we have been, where we are now and where we hope to be in the future.

Rock Hill’s Freedom Walkway was supported by grants from the National Endowment of the Arts, the Arts Council of York County and the Barre Mitchell Community Initiatives Fund. It was awarded a 2017 ASLA Southeast Merit Design Award and a 2017 Cultural Diversity Award by the National League of Cities.

Watch a video of the project’s process here:

All photos for this story by Matthen Benham.