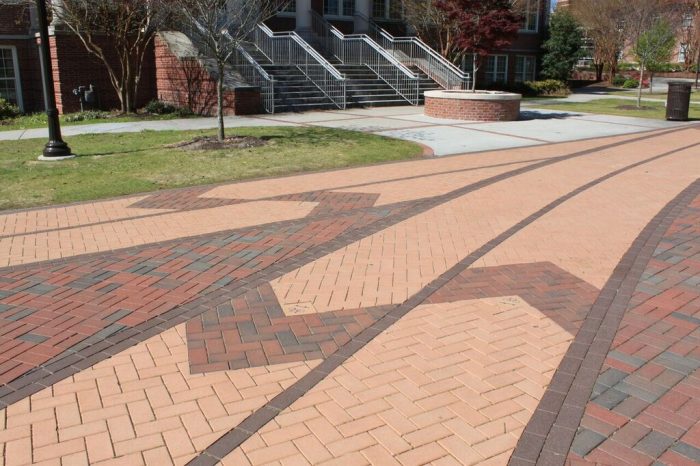 Aesthetic paving for public, institutional and corporate applications is achievable with clay brick pavers. The segmental nature of pavers and their broad range of colors and styles give landscape designers and paving contractors lots a latitude to create affordable, functional and beautiful hardscapes.

Award-winning Freedom Walkway is a masterpiece of segmental paving.

Two firms recently demonstrated this and are being honored by the annual Brick in Architecture Awards. 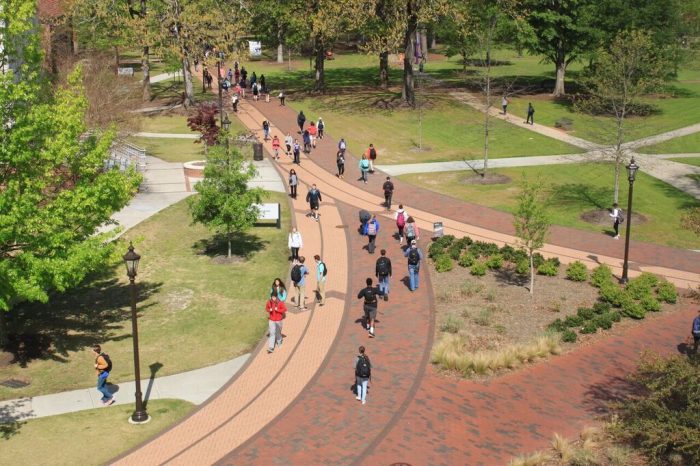 The winning projects were chosen in the Paving and Landscape Architecture category. Founder’s Way renovation at East Carolina University in Greenville, NC won the Gold Award and Freedom Walkway, in Rock Hill, SC that commemorates a sit-in by college students during the Civil Rights movement in the 1960s, took home the Silver Award. A panel of architects from across the United States served as judges for the competition. The competition awarded five Best in Class, five Gold, five Silver and four Bronze awards from 88 total entries. 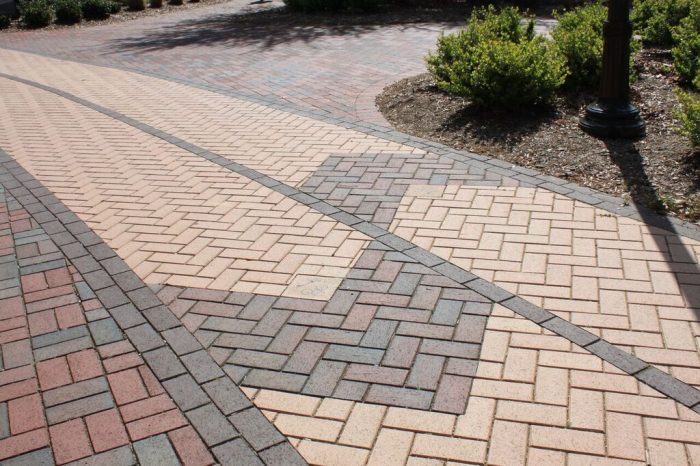 Chevron pattern acts as a directional arrow in bike path.

Founded as a teacher’s college in 1907, East Carolina University, now the third largest university in North Carolina, with renowned programs in the arts, sciences, business and medicine. ECU invested in a network of clay paver walkways and bicycle paths. The design effectively brought a unifying design element to the historic campus mall, to what was once a disjointed collection of vehicle alleyways and parking lots.

Brick pavers give designers and installers a lot of latitude and creative flexibility with a wide range of colors and styles.

The rich tones of the clay pavers complement the historic architecture surrounding the mall and contributes to the collegiate atmosphere as it weaves past old-growth trees. The craftsmanship expressed in the project has led to a campus icon that reinforces the school’s brand.

The usefulness of the pavers extended well beyond aesthetics. The pavers proved themselves durable enough to withstand both 80,000 pound emergency vehicles and event traffic. 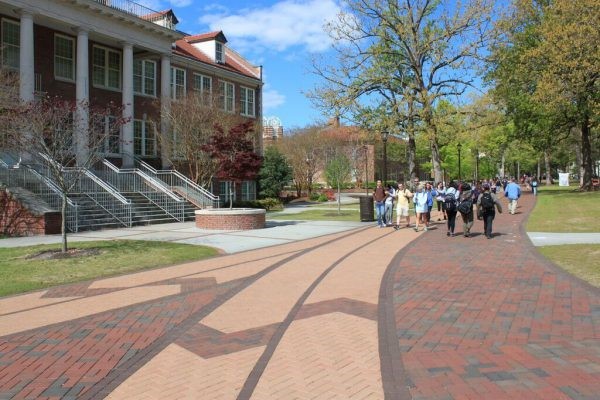 And tomorrow? More is on the way, as the Founders Way project is the first step in a planned network that will link all campus neighborhoods.

Freedom Walkway: an inviting public space and pedestrian thoroughfare with a sense of history 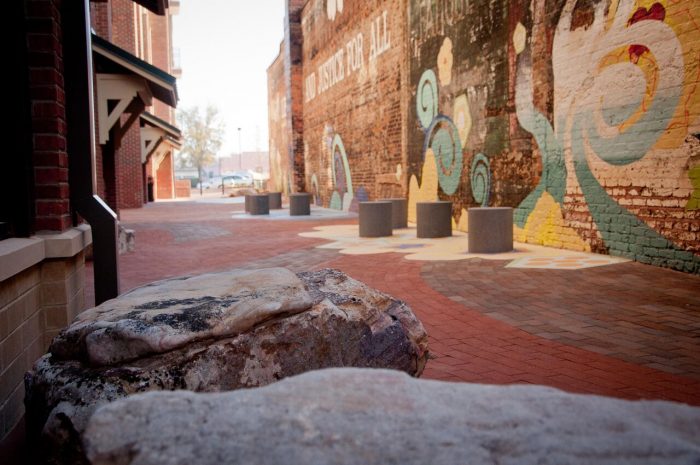 The City of Rock Hill designated a space for a public walkway between a historic building and a new development, providing a critical pedestrian connection in the Old Town area of downtown. The walkway honors the Friendship 9, who were students at the now-closed Friendship Junior College. The students integrated the McCrory’s lunch counter in 1961 and were arrested for trespassing. The design references the reopening of the court docket book in 2015, vacating their trespassing convictions.

Within the installation itself, a curving running bond pattern of clay pavers flow through the space, conveying the idea of movement and inspired by the nearby Catawba River. The pattern transitions to basketweave at gathering areas and are designed as spaces for connection, understanding and empathy.

This pattern of alternating red and cocoa bricks pays homage to the Catawba Indian tribe of Rock Hill with their tradition of basketweaving. The mix of brick colors complement the surrounding streetscape, walls, and urban context and ties the project together visually. 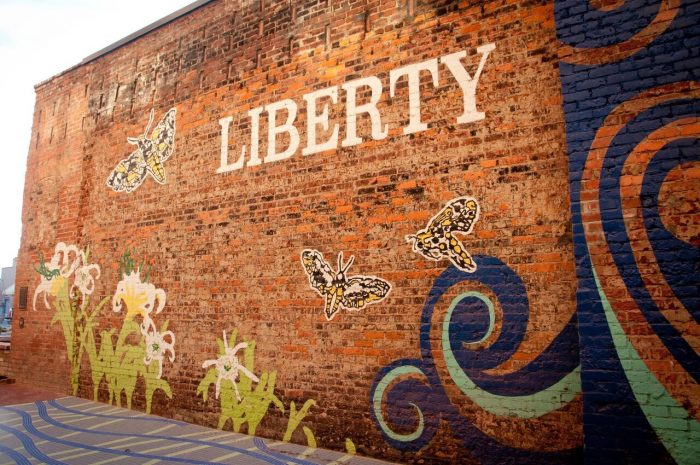 Bricks from the former Woolworth Building were used to build the seatwalls and curbs. The weathered quality of these bricks added a historic richness to the layers of the project. The historic brick wall that was exposed when the Woolworth Building was demolished was preserved, including the painted advertisements that were revealed when the wall was exposed. The layer of soot from a past fire that scorched the brick wall was allowed to remain and become the background for a civil rights mural inspired by cultural and natural history. 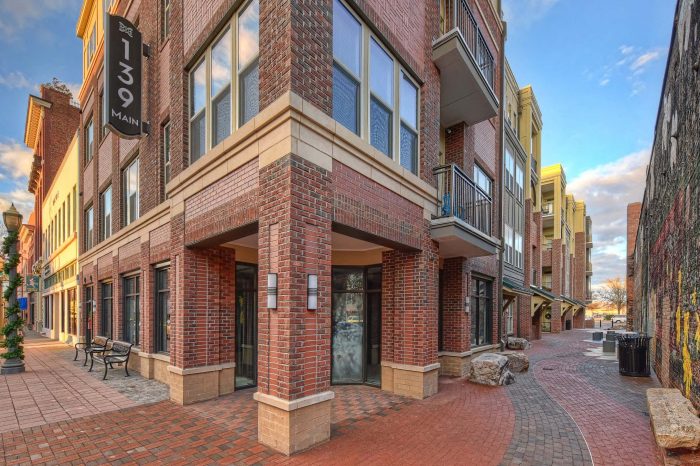 “Both winning projects show the authenticity, aesthetics and durability inherent in genuine clay pavers,” said Walt Steele, vice president and chief operating officer for Pine Hall Brick Company. “The winners here are also the students, faculty and staff at East Carolina University who live and learn on a beautiful campus and our neighbors in Rock Hill, where a walkway not only provides a way to get from one place to another but a way to remember a part of our history.” 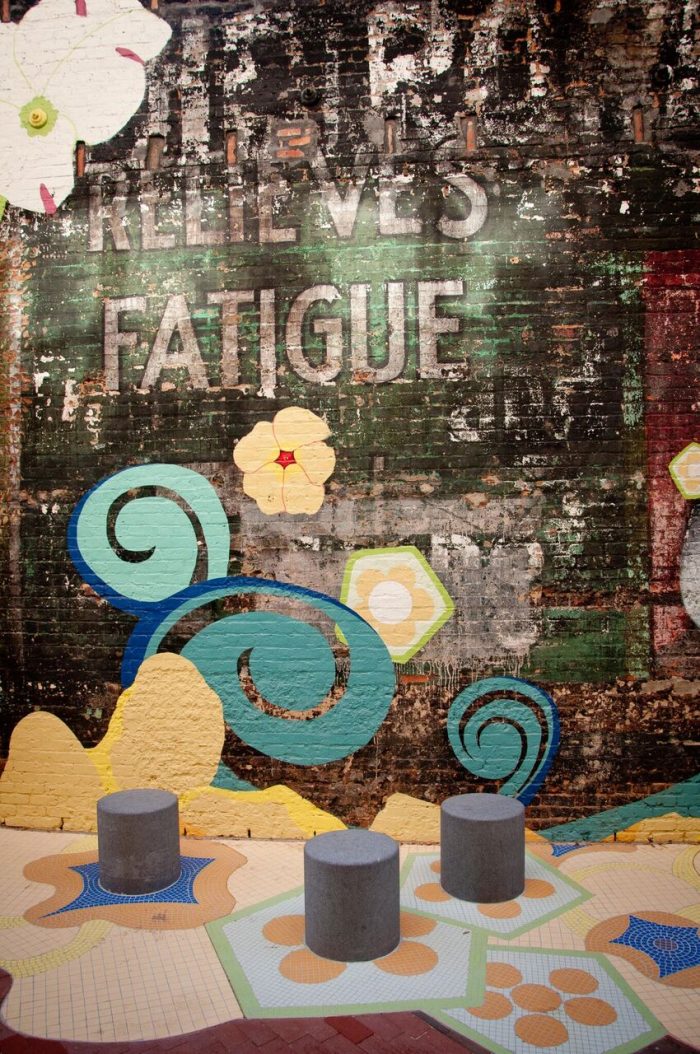