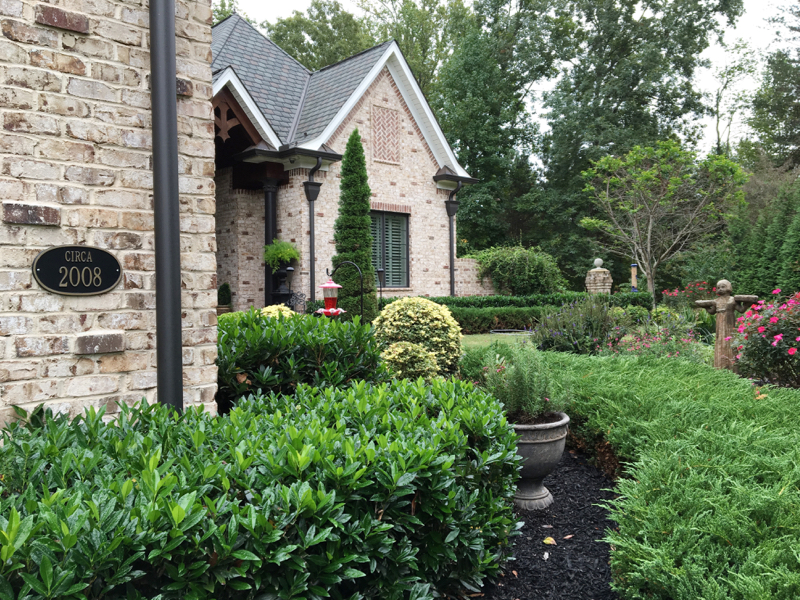 Brick defines Worth Mitchell’s home in Kernersville, NC. From the gated entry with its distressed mortar treatment reminiscent of a 400-year-old Spanish villa to a beautifully aged two-story veranda and patio with pavers, Mitchell has crafted a dream home that looks like it belongs in an upscale travel magazine.

And that’s exactly what Mitchell had in mind when he designed it.

The home itself seems to keep going, too. It’s over 11,000 square feet, including a seven-car garage, sprawls over the hillside property just above the headwaters of the Haw River. The secluded lot is landscaped with plenty of greenery and the manicured shrubs along path to the front door compliment the home in a way that’s cheery and welcoming even on an overcast day

Mitchell acted as his own contractor and designer with the help of Steve Almstead of Almstead Custom Homes during the 2007-2009 construction process. As a successful serial entrepreneur—whose business interests include high end construction, development and design, gourmet sauces and seasonings, Spanish galleon shipwreck salvage and Kvell Vodka, a high end 10-times distilled premium Vodka—this homeowner takes DIY to a whole new level.

“I designed it on a napkin, then took it to a buddy of mine, Sal Interlandi of Sal Interlandi Architects,” says Mitchell. “Sal’s a very, very talented architect who put it on his CAD system and got it all handled which included rendering a set of plans.”

Using a palette of Pine Hall Brick Oyster Pearl product, Mitchell was able to achieve a masterpiece of subtle shades and earth tones with the popular white brick. And got a lot of satisfaction pulling out all the stops with the masonry details.

You see this in the soldier courses, the randoms and the herringbone and English bond where every third course is flipped to show the back unfinished side of the brick. All the corners on the steps, windows and doors have ogee returns and one-and-a-half Spanish arches are used beautifully.

It’s almost as if Mitchell built his own village complete with outdoor cafes, gardens and paths. To get to work, he takes stroll down a walkway paved with Pine Hall Brick English Edge clay pavers to an office that overlooks three small waterfalls in the draw behind the property.

Like a lot of entrepreneurs, Mitchell is always in motion and he’s now in the process of selling the home. Pine Hall Brick will play a big part in marketing its curb appeal.

The home is currently listed by Wendi Huffman of Tyler Redhead & McAlister.

To see more photos from the Mitchell home and other inspiring designs, visit our Pinterest page.