Thin brick is in 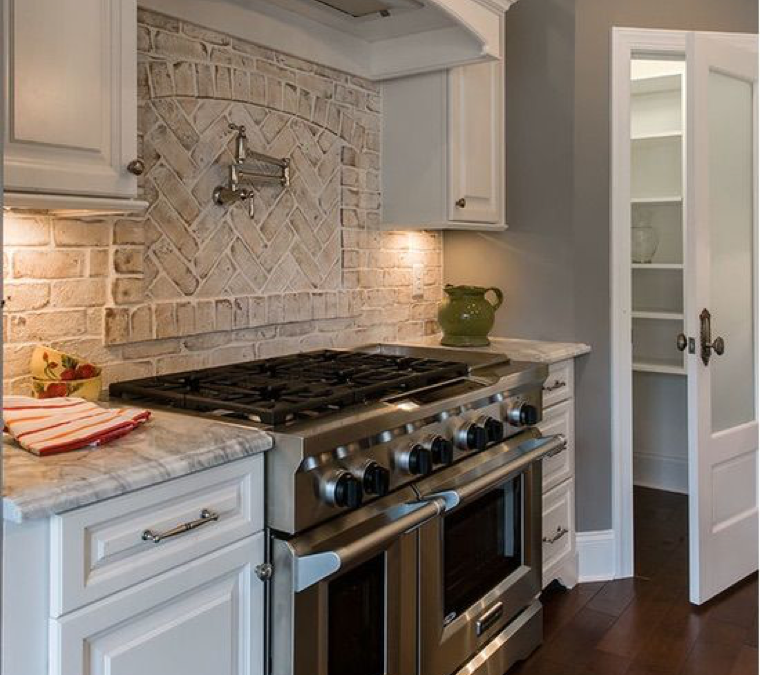 You can never be too thin. The problem with interior designers, landscape architects, paver installers, brick masons and the like is that thin is sometimes hard to come by.

Not talking diet and exercise here – talking bricks and a trend toward slimming them down.

Thin brick, whether on the wall or on the floor indoors and on steps and plain concrete stoops and patios outside, have become popular design elements.

Get thin with Pine Hall Brick!

The solution for a brickmaker is to (A) make thinner bricks or (B) to take ordinary bricks and cut them down so that they are thin.

Thin brick, whether on the wall or on the floor indoors and on steps and plain concrete stoops and patios outside, have become popular design elements.Pine Hall Brick Company now does both, with a new high-tech advanced diamond-blade saw, which has been installed in its manufacturing plant in Madison, NC.

It’s not the sort of saw that you can pull out of the bed of your pickup truck at a job site. The saw is 16 feet long, seven feet wide and seven feet tall, with a 36-inch blade. It can be loaded with 12 pavers or 15 face brick at a time and is capable of cutting about 4,000 thinner versions of Pine Hall Brick’s products in an eight-hour shift, said Preston Steele, vice president and thin products business manager.

The saw is being used for two products: interior veneer brick called ThinClad™ and brick floor tiles, branded as PaverTiles™. Both are suitable for do-it-yourself projects or professional jobs, including new construction or remodeling.

ThinClad and PaverTiles are cut from face brick and paving brick, respectively. Pine Hall Brick rolled out the products using a conventional wet blade saw. As demand grew, it became time to ramp up production for both products.

“It’s really a continuation of coming out with new products as markets and trends change,” said Steele. “It’s part of the evolution of Pine Hall Brick. But in order to do that, we have to have the right tools and equipment.” 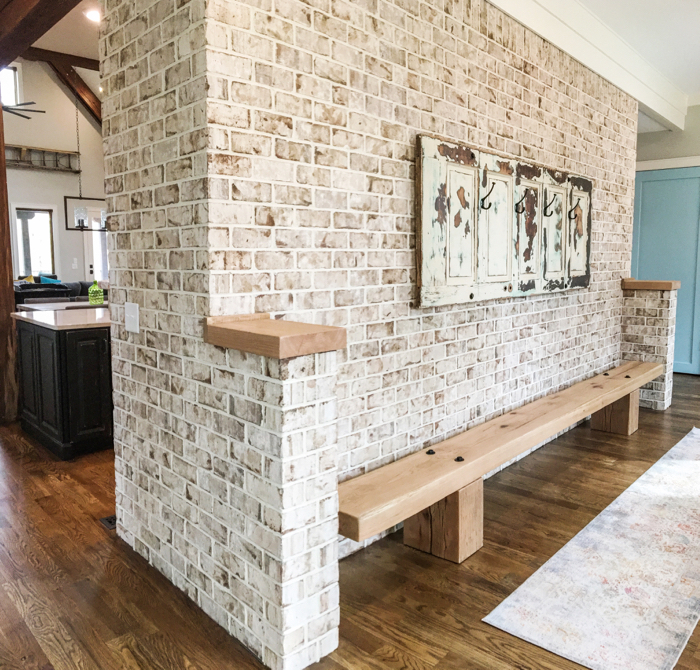 ThinClad comes in almost any color of our regular brick line; a boon for interior designers.

One growing trend is exosed interior brick. ThinClad brick, a ½ -inch version of its face brick, has become popular 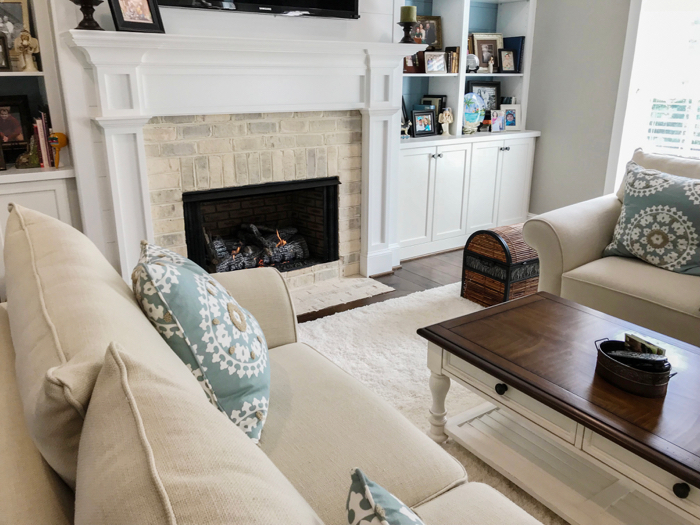 ThinClad brick helps you fancy-up a fireplace with brick, but without the need for concrete footing.

indoors as a replacement for tile as backsplashes or as feature walls and sometimes for entire rooms.

“ThinClad is a way to have authentic brick without the footers required for traditional masonry,” said Steele. “It’s well documented that apartments demand a higher price if they have interior brick walls.”

The ThinClad product is also used outdoors, on chimneys, gable ends and foundation walls, while the same, identical face brick is used on the rest of the building. Much of the ThinClads line is extruded to the ½-inch thickness before it is fired in the kiln, but some of it has been made from ½-inch slices of face brick cut off by a saw. 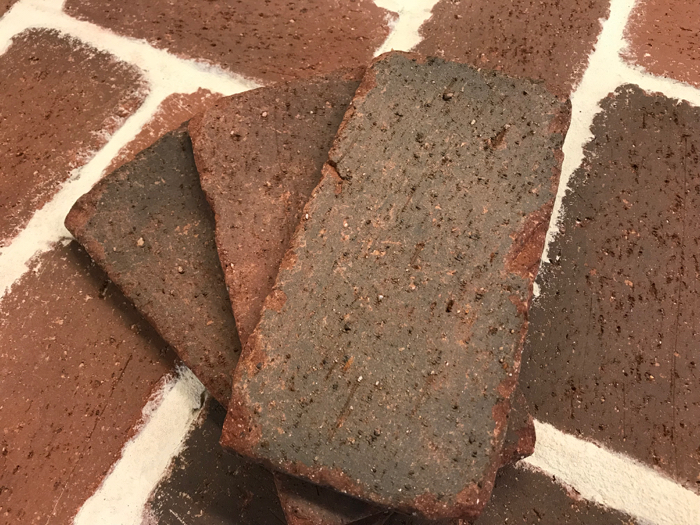 Thin brick PaverTiles™ are taking off.

In early 2018, Pine Hall Brick introduced PaverTiles, which used a saw to cut slices of three-eighths, one-half and

ThinClad brick helps you fancy-up a fireplace with brick, but without the need for concrete footing.

three-quarters of an inch off its pavers, for use as interior floor tiles inside or as overlays on exterior slabs.

PaverTiles are installed like ceramic tile and allow the homeowner to bring the timeless appeal of authentic clay brick to spaces with height or weight restrictions. Kitchens, mudrooms, laundry rooms, sunrooms and wine cellars

are all places where PaverTiles work well.

Outside, PaverTiles are ideal for rehabilitating outdoor spaces, where door thresholds and steps often prevent the use of full thickness pavers. Thinner PaverTiles can convert a tired old concrete slab into a clay paver porch or patio.

Steele said that the new saw was needed because the volume on PaverTiles orders is expected to triple this year.

“We knew our colors were good and there was a lot of demand for a product like this,” said Steele. “But we are in a position where if we marketed too much we couldn’t meet demand. We got by with the old saw but had to wait until we  started marketing more heavily.”

An advance in technological capabilities for growing demand 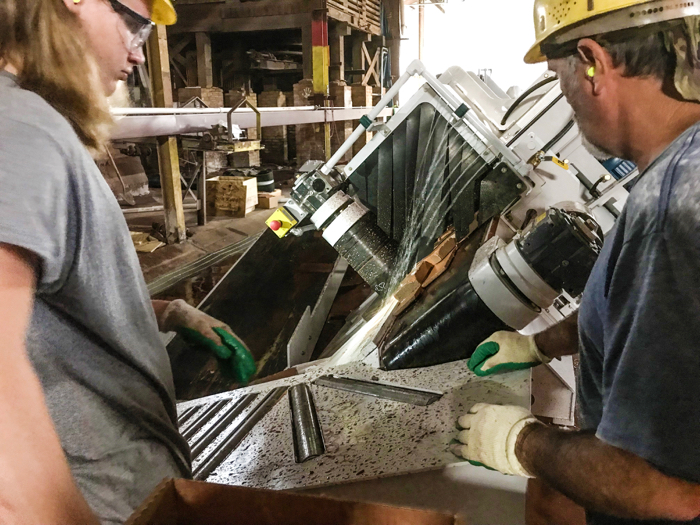 In addition to increased capacity, the new saw works much better. It has much greater tolerances and is self-adjusting. The operator sets the height of the cut wanted and the speed. A conveyor brings the brick to the blade. If it hits a hard place in the brick, then both belt and blade slow and adjust on the fly, which saves the blade.

For now, two new employees have been hired to run the saw in one eight-hour shift. If demand increases, more shifts will be added.

To house the new saw, Pine Hall Brick converted a storage area at its plant in Madison, NC, into a mini-manufacturing plant, with new concrete flooring, walls and electrical upgrades.

The installation includes a water recycling system which will collect the fine dust, which Steele said might be useful for athletic fields.

“We didn’t have to do that, but being this close to the Dan River, we felt that recycling the water was the right thing to do,” said Steele.

As it is, the saw leaves a half-inch piece of paver in the center of the cut, which may make a PaverTile, although its surface is smooth and different from other PaverTiles. Until the decision is reached on whether, and how, to market the leftover pieces, the company is breaking them up into brick chips to sell to landscaping companies for mulch.

Steele pointed out that it the ThinClads and PaverTiles are the same products Pine Hall Brick has always been known for, but thinner.

“It’s a natural product, just like our pavers and face brick,” said Steele. “It’s authentic, not made any differently than we were making brick 90 years ago. It’s shale and water fired to 2000 degrees. Very little has changed, it’s just a different thickness.”

Or thinness, as the case may be. 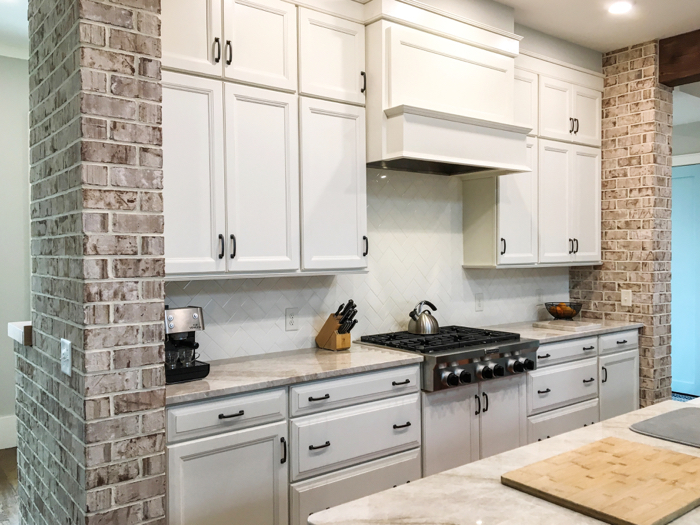